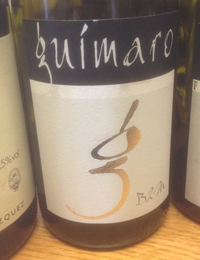 2007 Guimaro, Mencia, B2M, Ribiera Sacra, Galicia Spain.
After tasting all the currant releases of Pedro Guimaro’s, Jose Pastor his importer, brought out this gorgeous 2007 vintage B2M Mencia to try, and wow, it was drinking perfectly with a great array of flavors and complexity, showing some mature notes, but with lots of vigor and vibrancy. Guimaro’s wines from from vineyards in Spain’s wild northwest, first treasured by the Romans and the Ribiera Sacra looks more like the sleep river valleys of German’s wine country than anywhere else in Spain you could imagine, this is beautiful and haunting landscape, and this area and the Ribeiro are region that produce some of Spain’s most elegant and interesting wines, epecially Mencia, Brancellao, Caíño Longo, Ferrol, Caíño Redondo, Sousón and Garnacha Tintorera, for reds and Godello, Albarino, Treixadura, Torrontés and Loureiro in the whites. The Guimaro B2M 2007 is showing beautifully with sultry layers of racy fruit, mineral, spice and a touch of game/animal, in fact this Mencia reminds me of a Chinon, a Loire Valley Cabernet Franc with a leather horsey note, chalky stones and dried violets. The color is dark garnet with a bright edge, the nose is earthy with hints of flowers, truffle, sandal wood and red currants, while the palate shows red cherry, tangy plum, blackberry and porcini along with cedar, bell pepper, minty herbs and a faint touch of brettiness that I hope is not going to get bigger. Those that need fruity ultra clean wines will not be thrilled, but old school and natural wine drinkers will absolutely love this, especially fans of old Rhones or the mentioned Loire old school producers, I like the latest Guimaro wines a tad better as they has less old barrel influence, but this is a stylish, mature and classy effort that really impresses, this is good stuff. The new Guimaro lineup is pretty fantastic, from is Godello based white to all of his 2011, 2012 and 2013 Mencia offerings, so I highly recommend searching these wines out. It was great meeting Pedro Guimaro, getting to understand the vineyards and regions in Galicia, so a big thank you to Farm Wines, Jose Pastor Selections and San Francisco Wine Trading Company (my day job) for putting on this great tasting! I can’t wait to visit this part of Spain, especially after tasting these wines!
($45 Est.) 92 Points, grapelive