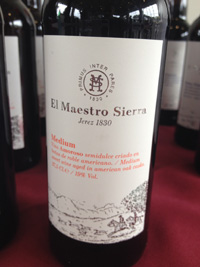 n.v. El Maestro Sierra, Medium Amoroso, Semi-Sweet Sherry, Jerez, Spain.
The famed El Maestro Sierra bodega was founded in the early 1800’s by a master woodworker named Jose Antonio Sierra and quickly became one of the regions most treasured Sherry houses and even today some of those early glories remain, it still has many old and rare stocks, making it the destination for visits to Jerez, and one of the most sought after wineries in the world. I was lucky to taste through an amazing array of fine Sherry and El Maestro Sierra is on another level with some of the oldest Sherry wines available and many gorgeous offering throughout their latest offerings, including a majestic Palo Cortado, a deftly crafted dry Fino and sweet and balanced Pedro Ximenez, but I think my favorite was this spectacular Medium Vino Amoroso. The El Maestro Sierra version of “Cream” Sherry is a world class semi-sweet dark Sherry aged in American oak cask and gets additional years of age in a solera, it is made from a base of 15 year Oloroso (Palomino) about 90% and 15 year Pedro Ximenez 10% (this is where the rich sweetness comes from) and trust me this is not Harvey’s Bristol Cream, this is magnificent and decedent fortified wine that has almost tawny port elements but not as sweet. The Amoroso is filled with Walnut, pecan and oily almond layers along with maple, honey and toffee notes with a core of dried peach, orange rind and tropical fruit. This is rich, mouth filling and long on the finish it is marvelous with smoked ham, cheeses, nuts and can be sipped on it’s own, this is a stunner and a great entry into the world of Sherry.
($18 Est. 375-Half Bottle) 94 Points, grapelive