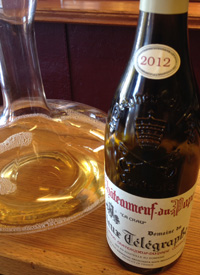 2012 Domaine du Vieux Telegraphe, Chateauneuf du Pape Blanc, La Crau, Rhone White, France.
The Brunier team at Domaine du Vieux Telegraphe have done a masterful job with the 2012 Chateauneuf du Pape white wine, and while it still remains a rare curiosity against their more dominant red wine, I actually like it better in this vintage and find it amazingly pleasing and rather elegant. This wine has not been as consistent as the main red wine over the years and it has not got the cult like following that Chateau de Beaucastel has built up around it’s white wines, but in some vintages Vieux Telegraphe puts out a great white, and while not ultra great, this 2012 is a very stylish example and is drinking wonderful at the moment. That said, it should be a great deal better in 2 to 3 years. I have found a little bottle variation so far, I was able to taste it 5 times from 5 bottles and 3 out of 5 were brilliant, 2 out of 5 were a touch shy, not as good, so I think a year in bottle will bring things right. The 2012 VT white shows loads of citrus and stone fruit, gets creamy towards the mid palate and finishes with enough spice and bitter elements to keep vibrant and focused, it is no where near as lavish as Beaucastel, but you will be rewarded with an elegance and finesse instead and it should go remarkably well with food. There is a lovely golden hue, a bright nose with floral notes and spice, hints of saline, peach pit, apricot, tangerine, pear and a lemony feel, it gathers density with air and the are notes of butter rum, fig and sublet Roussanne oily intensity. This years cuvee is made up of Clairette, Grenache Blanc, Roussanne and a touch of Bourboulenc, and it comes from La Crau one of Chateauneuf’s great lieu-dit(s) that has the classic galet stones and farmed in old school bush vine fashion. The latest white from Domaine du Vieux Telegraphe is a sleek, stone and vivid offering that will certainly get better in the coming months in bottle and should have an early window of enjoyment, drink from 2015 to 2020.
($80 Est.) 92-93 Points, grapelive