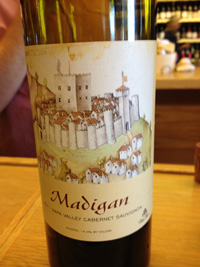 2011 Madigan, Cabernet Sauvignon, Napa Valley.
This lovely and delicious Cabernet is a steal, this very complete red is pure Napa artisan wine made by Chris Danielak, who also makes the flagship White Rock Vineyards wines (Madigan is their second label) for his family. White Rock started in 1977 with the revival of the historic winery that was originally started back in 1870, the Cabernet vines were planted back in 1977 and the current line of wines were started back in 1986 by Chris Danielak’s father, who he took over from in 1999, though Chris has also done winemaking gigs across the pond in Spain and in France. White Rock’s wines have always garnered high praise and their low alcohol, European style, that has really become popular lately, are without question classy efforts. The 2011 Madigan Cabernet Sauvignon is a fresh, but filling wine with a dark garnet hue, vivid berry and cherry fruit, earth and spice, plus subtle oak notes. There is a tangy currant core that comes through on the palate with air, and there are touches of cedar, baking spices, licorice and a nice long aftertaste. This is a solid and well made Cabernet Sauvignon, perfect for easy drinking and especially exciting for bargain hunters.
($18 Est.) 90 Points, grapelive