Giuseppe Vajra is one of Piedmonte’s newest stars and while he is a long line of Vajra’s and the family has a long history of winegrowing in the region it really has been since 2008 that things have brought him and the wines to international attention and world fame. Vajra makes an amazing selection of beautiful wines, but is most famous for their glorious Nebbioli, and their Barolo stands out, especially the Cru Bricco delel Viole, this is a wine that collectors and purists covet and showcases the talents of the Vajra family. Giuseppe fresh of the flight from Italy, on a quick sales trip to California showed off his lineup of 2010 vintage Barolo, his own label G.D. Vajra and the winery they took over in 2008, Luigi Baudana in Serralunga d’ Alba, all of which were stunning, each showing youth, terroir and subtle unique distinction along with the deep fruit of this acclaimed vintage. These wines certainly will need years of time to reveal everything they possess, but these are potentially the best yet from Giuseppe Vajra. The Bricco delle Viole is the most impressive as expected, but the two Cru Luigi Baudana wines, Baudana and Cerretta are both masterpieces as well, but they’ll need to develop a while in bottle and these three wines could rate near perfection in 5 to 7 years and drink from 2020-2032. The basic Baroli are fantastic values and will have a window of enjoyment that will start sooner, with the G.D. Vajra Albe having already ready been in bottle almost a year now, showing much more open and generous, but I found myself drawn to the recently bottled 2010 Luigi Baudana Barolo Serralunga, see below, and while these Barolo wine need to age, Giuseppe Vajra’s other wines should be more than enough to keep you entertained in the meantime, especially the Vajra Dolcetto, Barbera, Langhe Nebbiolo and his exotic Freisa, maybe the best version of the varietal in all of Piedmonte, plus Vajra makes one of the best Rieslings you’ll ever try, a dry complex offering that rivals many Austrian, German and French wines, so be sure to checkout Vajra’s wines and if you are a real Barolo enthusiast, you’ll need to hurry to reserve your 2010 G.D. Vajra and Luigi Baudana collection, they will sell out fast, Vajra and Baudana are in imported by Rinascimento Wine Company of Los Angeles and are available through Beaune Imports in Northern California. 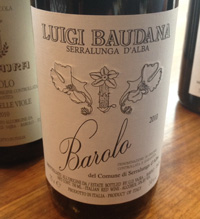 2010 Luigi Baudana, Barolo DOCG, del Comune di Serralunga d’ Alba, Piedmonte, Italy.
Giuseppe Vajra’s lovely and precise normal Barolo from his Luigi Baudana label is maybe the steal of the vintage so far, it is wonderfully classic and full of flavor with an array of layers and superb structure, it shows fine tannins and nice acidity, neither of which intrudes on the generous fruit. The 2010 vintage is one of the most hailed years for Barolo I can remember, and after tasting the Vajra and Baudana I can certainly see why, and agree, this is a fantastic vintage and these wines have massive potential, even though you’ll need to wait some years to get all that is promised, these wines will be very rewarding and they deserve a place in your cellars. The regular Baudana crafted lovingly by Giuseppe Vajra is really a seductive and pretty wine with hints of roses and wild flowers, minty tar, bacon and lifted red fruits including plum, cherry and brambleberry along with anise, spice, loam and truffle notes plus a lingering finish of tangy currants and cedar. This wine shows a delicacy and poise already with a glorious full mouth feel, subtle density and there is much more to come, be sure to keep an eye out for the Luigi Baudana 2010 Barolo, it should arrive in the States late fall of this year (2014) and should drink wonderfully for the next decade easy, best from 2016 to 2021.
($55 Est.) 93+ Points, grapelive