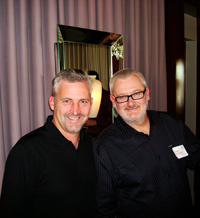 While not a household name here in the States, Chris Ringland is a star in the winemaking world, and a rock star in wine geek circles. Ringland is highly regarded for his own label Chris Ringland Shiraz (Formally known as Three Rivers Shiraz) and he now makes the Marquis-Philips wines. Australian winemakers are very successful and have made a name for themselves worldwide, in places like Italy, France and especially here in California, but as name brand winemakers maybe no one has quite the star power, both at home in Oz and on the world stage, as Chris Ringland. He was little known when he was discovered by, who else, Robert Parker, after Parker tried his Three Rivers Shiraz (Barossa Valley) in 1993, which he gave 99 Points!  Then the ’94 scored 95 Points, so he was no fluke and on his way, he was at this point fully and completely exposed and when his ’95 got another 99 Points, he had a rabid fan base that would pay almost anything to get his wine and did! His Shiraz sold for a mind-blowing $300 a bottle in 1999, but now sells for anywhere upward of $800 a bottle. He was now in the big league with top Bordeaux and Burgundy, though I would say he was more like Guigal who’s single vineyard Cote-Rotie’s got the same scores and money. Since then Chris Ringland has scored 4 vintages rated at 100 Points from Robert Parker! (With a 96 and 98 being the lowest scores) Ringland is a hard worker and prolific in creating wines now, after expanding into a multi-label portfolio with his “R Wines” company.

With all that, it was a great pleasure to meet Mr. Ringland and get to spend some time tasting through a huge line up of his wines. I was thrilled to be invited by his importer The Grateful Palate and The Henry Wine Group who wholesale his wines in Northern California to be a part of this event in San Francisco, part of a 12 city tour of the US. Along with Chris Ringland was William Downie, a rising star himself, from Victoria, and that makes stylish Pinot Noir from Yarra and Mornington, and David Hickinbotham of Paringa Winery of Riverland in South Australia who produces some of the world’s best $10 red wines, including his Shiraz that has almost always features highly in any value contest. Both Downie, who is also now going to make Oregon Pinot, and Hickinbotham, who got fame for selling top grapes from his namesake vineyard to Clarendon Hills which scored big scores from Parker and Wine Spectator Magazine, were not just taking up space at this tour of Oz, both being charming and showing super wines.

Ringland easily led our group through a line up of Grenache, mostly from his new label Chateau Chateau, which were mostly single vineyard wines from Barossa Valley and McLaren Vale. These wines are not shy wines with some topping 17% alcohol, though very interesting and for the most part balanced on the palate. This style reminds me of Turley Zinfandels that are sweetly fruited and rich, but stop short of being to heavy or too port like. After tasting through the line of Chateau Chateau wines and made my mental notes about them, I read the Parker reviews of the 2006 vintage and found that they all rated 93 or better! I tasted the new vintage (2007) and came up with similar notes and scores in general, though I am slightly less of a fan of this style of wine, but there were a few exceptions. The 2007 Chateau Chateau “Pergola” Grenache Blewitt Springs, McLaren Vale was my favorite wine of the show and showed richness and ripe fruit, but also some earth, spice and mineral like a top Chateauneuf-du-Pape. Of course, it being from old bush vine vineyards didn’t hurt and that it was not done on new all new oak gave it more depth and complexity of fruit. He also poured some dazzling Shiraz’s that were blockbusters and powerfully dark with his 2004 F.U. Ebenezer Shiraz, Barossa Valley being the Shiraz star, showing massive power and thickness with inky black color and sweet plum and blueberry compote fruit. This wine is huge and textured with a super long sweet finish, being very much like a dry port. This wine was aged mostly in new French oak hogsheads for 30 months, some being the wonderful the Taransaud barrels, which maybe the best Syrah barrels in the world! The grapes come from vines that range from 40-80 years of age and only give about a ton of fruit per acre, so you get the idea that this is something really special and it lived up to its promise and I can tell you it was awesome.  This wine is priced high, and while it would never be considered a value at $265 a bottle, it is a stunning wine that showcases Chris Ringland’s talent and makes for a very special a unique wine.

What is also unique about Chris Ringland and his “R Wines” is that they are all playful and you can tell that while being very focused and a supreme talent Ringland does not take himself too seriously, or well maybe he does, but his labels would not have you believe that. With labels like “Bitch” Grenache, Evil Cabernet Sauvignon, Bon Bon Rose of Shiraz, and Suxx Shiraz you can tell he is having lots of fun. Ringland was and is everything he is advertised to be and I was very impressed with his easy style that hides his passion, though it is very clear he is driven and has no slowdown in him at all. I must give kudos to the Grateful Palate and their owner Dan Philips for putting on this great tasting and bringing in such interesting wines, Thanks guys! Ringland makes the Marquis-Philips wines in partnership with Dan Philips, and together they continue to offer great wines at very fair prices, so check them out if you haven’t done so all ready as well.

2005 R Wines 3 Rings Reserve “It’s Magic” Shiraz, Barossa Valley, Australia (By Chris Ringland)
This is a massive and complex wine that has amazing depth of fruit and thick textures and a finish that never wants to leave, I mean it goes on and on! The fruit is so huge in this Shiraz that it takes 36 months in French oak to tame it and give it roundness and loving framework. This wine has pure purple goodness, a wonderful full body and looks very sexy in the glass! Black fruits, blueberry, prunes, chocolate, coffee bean, kirsch, white pepper, licorice, truffle and sweet vanilla all unfold in seamless layers on the palate and coats your whole mouth with an explosion of flavors, plus staining your poor teeth! This bold Shiraz comes from select vineyard sites that average 85 years in age, yeah this are old vines! Wait, it gets better, they only get about ½ on ton of fruit per acre, so now you know why it is worth every penny. ($60-65 Est.) 95 Points, grapelive