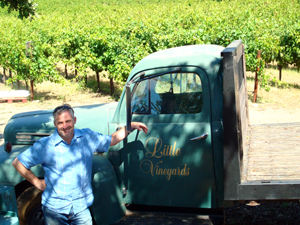 Sonoma and an All American Fourth of July
Kerry Winslow

I went to Sonoma to see a friend and reconnect with my inner American/Rocker roots, as well as taste a bit of wine. My friend, Bradley Gray, a writer, a public relations guru, an amateur race driver, and accomplished guitarist had told me about a friend of his that was a professional musician turned winemaker and said he was playing a gig and that I should come up and spend Independence Day with him in Sonoma, where unlike my Monterey, was going to have fireworks, a parade and hot rod car show as well as a rock concert all near the vines of Sonoma Valley. So I agreed, and off to Sonoma I went to hear some music, taste some new wines and soak in the rich Americana that I’ve somehow been missing. 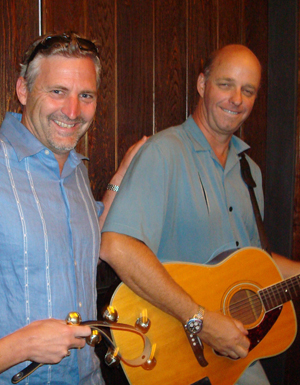 Bradley, who is now working on a book project and whom I’ve known for better than 30 years, was looking at me when I arrived with distain, me in Puma trainers (I mean sneakers!) a shirt that looked as if I was trying out to be in Coldplay, Lacoste cologne and chatting away about how cool Europe was… Then he saw the playlist on my iPod! Oh my God, I thought he was going to have a heart attack after seeing Lady Gaga. He was now convinced I needed an intervention; I was not helping myself by bringing a white Burgundy to Sonoma, even though he loved it! He had his work cut out for him, and he relished the challenge, starting out by playing some Van Halen, James Gang, Aerosmith, Journey and other American rock classics to refocus me. He reminded me it was the Fourth of July for heaven’s sake, it was time to get my USA on!

We then headed to the Sonoma plaza, in downtown Sonoma to see the traditional Independence Day Parade. This was as old fashioned as we American’s get with a huge flag waving crowd cheering the kids and animals marching by with big smiles and we all saluted our heroic veterans and servicemen and women with pride. There were all the fixings, clowns, horses, native Americans, hot dogs & hamburgers, apple pie, funny costumes and of course, everyone’s favorite, fire trucks! It was sweet and patriotic with a sense of small town charm and friendliness, even though I did cringe at the sight of the “young republican women” float… Then again the “hippie free love” float did not excite me either, both of which seemed very out of place in this setting, but it takes all types, and as Americans we are free to express our own views as we wish. 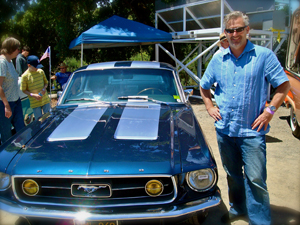 Then we were off to an All American Hot Rod show, refreshing ourselves with a Coca-Cola at the taco truck (okay, it is a California thing), supporting people that love America as much as we do, first. After a short drive we parked at B.R. Cohn, the well-known Sonoma winery owned by Bruce Cohn the manager of the Doobie Brothers and olive oil producer. B.R. Cohn makes a nice array of Sonoma wines and great olive oil from estate trees on a beautiful sun drenched piece of land in the heart of the valley. Bruce is a big supporter of local charities and a huge car buff and collector with some amazing hot rods and the like. What an event, with hundreds of polished chrome and fat tired beasts, live rock music, flowing chilled wine and a massive BBQ all almost too much to take in, going on. We wandered amongst a throng of humanity enjoying every minute, I was almost cured of my Euro influenced soul now and I was even giddy as a little boy at seeing a stunning Mustang fastback, a car I always had dreamed of owning! After refreshing ourselves again, this time with the winery’s latest offering, a tasty Russian River Pinot, while most of the others opted for the Sauvignon Blanc and even some “pink” wine, I must admit I chuckled at the black t-shirted hot rodders sucking down Rose…. We took in a set of the band. 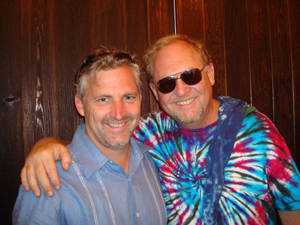 In the band playing was B.R. Cohn’s neighbor, Rich Little of the tiny estate Little Vineyards, and a famous musician who was jamming away on his guitar. They had the crowd singing and dancing along for a long rocking set that included everything from Prince to Tom Petty in a classic American session that brought the house down. Rich Little is still in the music game doing mostly small gigs around Sonoma and doing studio work and helping some friends like Elvin Bishop in his recording studio behind his winery!

With the day not showing any signs of winding down we followed the band next door to Little Vineyards for an All American/Rock n Roll wine tasting with some groupies and friends. Bradley had mentioned Rich’s wines and was talking up his latest estate Syrah, and I was not left wanting by any of the small production wines of this family run winery. I personally fell for the 2006 Zinfandel in a big way, which brought a big smile to Bradley’s face as it was clear that I was enjoying an All American revival, as Zinfandel is as American as a ’32 Ford!

Rich happily played his electric “stick” guitar as we tasted through the rest of his impressive line-up, which included a kitchen sink blend ‘Band Red’, the Zin, the Syrah, a juicy Syrah-Zinfandel, a Cabernet Sauvignon and a beautiful meritage called ‘Center Stage’ that had all the Bordeaux grapes. Little Vineyards produces about 1,500 cases and sells most all of it through their very cool tasting room and their small, but loyal wine club. We continued to rock out in the tasting room and sampling, okay re-sampling Rich’s wines, and soaked up the almost rock concert atmosphere with even the regular wine tasting groups joining in and singing along or playing the handy tambourine or other music makers lying about, making for a real unique wine experience. I did take a few breaks to hike through the vineyards and check out the grapes forming on the vine, plus take in some shade with the winey dogs, this is a beautiful and peaceful place. The property was once owned by the Hearst family and the tasting room has a piece of history inside as well, with the tasting bar being from an old gin joint that the famous American author Jack London drank at and formed some of his classic tales. If you get a chance you should check out Little Vineyards and the Sonoma Valley, and get your own bit of Americana back. I did and I’m glad I did, Thanks to my friends old and new. Happy Independence Day indeed.

2006 Little Vineyards Zinfandel Sonoma Valley
Bright cherry, raspberry, plum and bramble berry fruit layers and subtle spices, smooth tannins and long savory finish. Rich Little, the musician, rocks out in a band and his wines rock too! This wine is dark and layered with good vibrant flavors and nice balance. This is a very good red and is one that I bought and would buy again, no question. Little Vineyards is a fun place to visit and offers a great value on quality wines from a small estate vineyard in the heart of the Sonoma Valley. Little makes a very good Syrah, a fun Syrah-Zin, a smooth Bordeaux style wine called “Central Stage” and a big round Cabernet Sauvignon, check them out next time you are in Sonoma.