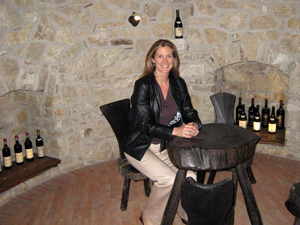 When I lived in Naples from 2001 to 2003, I fell in love with the wines of Mastroberardino, what I consider to be the gem of Campania region’s producers. It was their Taurasi that first caught my attention as I explored Campania wines looking for something to steer myself away from the old standby, Chianti. At the time, Taurasi, a bold red made from Aglianico grapes, was the only DOCG wine in all of southern Italy, which really impressed me. Thanks to Tony in the Navy base package store and his weekly TGIF wine tastings, I sipped my way through Mastroberardino’s lineup and discovered their other treasures, like Greco di Tufo, my all-time-favorite white wine, and Naturalis Historia, an important red with a beautiful, enticing bottle. At the end of two years of collecting, drinking and collecting some more, 120 bottles from various producers were shipped back to the states.Today, the only bottles that remain from that “collection” are two bottles of 1997 Historia, signed by Antonio Mastroberardino himself, which wait patiently at my parents’ home in Carmel Valley for a special occasion.

Believe it or not, I never actually visited the winery when I lived in Naples. Wine tasting is just not as simple as it is in the states, or especially California where you just show up, pay and taste.Italian producers know this and are working on ways to be more ready to receive visitors. For example, on May 31st, there is a national event called “Cantine Aperte” where many of the wineries all over Italy are open to visitors for tasting and buying. After such a great experience at Mastroberardino’s booth at Vinitaly, I knew I would not make the mistake of missing the winery this time while in Naples.Plus, there was a promise of a Neapolitan pizza feast… 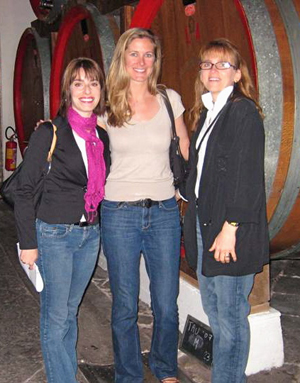 Recently, with two girlfriends, I made my second, and less formal, visit to the winery, about 45 minutes from Naples on the A16 autostrada heading east around the back side of Vesuvius.  For those of you who know the restaurant A16 in San Francisco, this road is its namesake.  On the drive out to the town of Atripalda, Mastroberardino’s home among the rolling hills of Avellino, the feeling of relaxation was almost tangible.  The three of us had smiles on our faces and each of us said, “now, THIS is what I expected Italy to look like!”  Green rolling hills dotted with olive trees, vines, and villages and a clear sunny sky fulfilled any romantic vision one might have of Italy (which, mind you, can be found OUTSIDE of Tuscany.)  Just minutes off the Autostrada, the winery is in the center of the little town, and stands beautifully and proudly as a piece of its history.  The fact that it was easy to find, and easy to get to was a delightful surprise for us.

We were greeted by Dario Pennino, Chief Marketing and Export Manager for the winery, who immediately took us into the production area to begin our tour.  As usual we were marveling at the huge stainless steel tanks and the production machinery that somehow fits together like a puzzle on this compact property.  As he walked us through the process and their special projects, and more of the secrets of winemaking were revealed, we tried to not lose that romantic feeling about wine making.  This was helped in large part by the organized beauty of the maze of stainless steel pipes that route the wine from tank to tank for the various stages of production, with all the precision and complexity of a computer circuitboard (or Formula 1 Ferrari engine!) 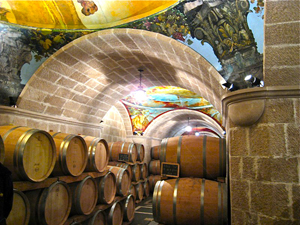 Our tour moved on to the cellar area where we were instantly met with the cool, delicious smell of red wine, oak and stone.  Mastroberardino’s history, in its various forms; ancient, old and recent plays out in many ways here, complementing the modern technology that keeps this winery at the forefront of (family-run) Italian producers.  We learned that that the types of grapes used to create their lineup of wines, like Greco di Tufo and Aglianico are of Greek origin, imported prior to the Romans, and thanks to the Mastroberardino family and their 130+ years of cultivation and research, they survive and flourish again.  We were told that after the Second World War, when many of the local variety vineyards had been wiped out, it was Mastroberardino who dissuaded wine producers from planting northern grape varietals and encouraged the repopulation of the indigenous species.  The most recent contribution to keeping the ancient history of Campania alive is the project that produces the “Villa dei Misteri” wine from grapes actually grown within the walls of ancient Pompei!  And not just any grapes, these are clones of the actual varietals grown before Pompei was destroyed in 79 AD.  This fascinating story coming in Part II. 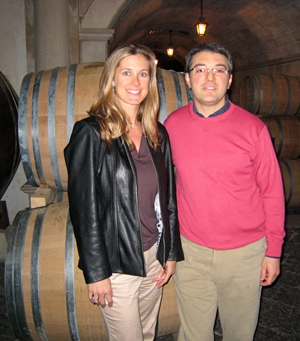 Still in the cellar with the barrels and barriques, we turned to see what they were all facing, the cellar wall, where we were met with a collage of the family’s more recent history.  A beautiful collection of letters and photographs from the last 120 years taught us that Mastroberardino is the oldest winery in Southern Italy and the first to export as well.  Letters from son Michele to the family, sent from South America before the turn of the century explain their first ventures into export to the rich cities of Montevideo Uruguay and Sao Paulo Brazil.  Next, was the letter from 1906 asking for financial backing to visit the “emerging city” of New York and explore the possibilities for export, demonstrating that the Mastroberardino family was, even then, looking forward while embracing its heritage.   After the 1980 earthquake that devastated Irpinia, many local families decided to leave the region, but this family stayed, citing the reason that their roots were there in the countryside of Avellino.  This philosophy gave rise to the name “Radici” or “roots” given to their  DOCG Taurasi made from Aglianico grapes.

Revered as the archaeologist of vines and wine, Antonio, the patriarch of the family today, was awarded the designation of “Cavaliere” by the Italian Government (the equivalent of Knighthood in Britain) for his work to maintain and preserve the history and viticulture of the Campania region.  This spirit is alive and well in the hands of Antonio’s son Piero, who heads the company and leads its progress in this 21st century.  One example of his honoring their past while innovating for the future is the change in their Naturalis Historia wine, from a blend of Aglianico and Piedirosso grapes to 100% Aglianico, thus designating it as a DOCG Taurasi.  This dedication to varietal purity (rather than the minimum percentages required by law) is executed masterfully by their winemaker Massimo in all of their wines, red and white.  I think this is something that makes Italian wine so special, and Mastroberardino’s in particular, that they strive to create beautiful wines from 100% of single varietals.  One must also recognize that the fact that they are able to do it with both their reds and whites is impressive, and in Italy, there are few small zones, if any, like Irpinia that can boast both red and white DOCG wines.

Leaving the collage of history, reeling from the fact that the documents we were looking at were actually the originals (!), we walked through the century-old cellars discussing the barriques, experiments in aging practices, and the fact that the floor we were walking on was actually the original street than ran through the center of town.  All of a sudden we looked up to see the vaulted ceiling and were amazed at the beautifully painted scenes of harvests and vines as depicted by three different international artisits, and we thought “why, why here?”  Art for the sake of the wine, the winemaker’s cellar and the lucky visitor is about as romantic as it gets when it comes to wineries, I think. 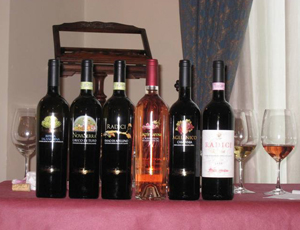 As I mentioned before, this is a compact property, though it doesn’t feel like it once you are inside.  We walked from the cellar through a set of doors to begin our tasting in a room that looked like a beautiful salon or living room with shelves of books, historic wines and cozy sofas.  A table was set up for us complete with spitting buckets, which made my friends a little nervous, but the lineup would have been impossible to get through without them.  (Besides, if you’re going to learn how to use the buckets, what better way than with friends?)  We made our way through the white crus, Morabianca Falanghina, NovaSerra Greco di Tufo which is a delicious compliment to my favorite dish, spaghetti with clams, and Radici Fiano di Avellino.  Then came the surprise favorite, the Lacrimarosa Aglianico (Rosato, or Rose), which impressed my friend who usually prefers a sweeter, younger red wine. This Rosato is my “everything” wine, enjoyable chilled as an aperitif, with first and main courses, and especially as a drinking wine in the summer months.  After sharing ideas for pairing this and the whites, we then moved on to the reds and tasted the 100% Aglianico which offers a terroir experience, and the DOCG Radici Taurasi Riserva 1999, also 100% Aglianico, which we agreed would be our choice for steak night.  The experience of tasting like this, in a professional yet friendly environment allowed my friends to get used to discerning aromas and flavors and both were delighted to have successfully spit out their wine!  We took glasses of our favorites to the salon table between the couches and enjoyed an extensive and delicious lunch.  Plate after plate arrived with something new and tasty to try with the wines, and we all picked our favorite pairings.  Again, the setting was more like being in someone’s home than at a winery, but that is the essence of Mastroberardino – sharing their wines rather than merely selling them.

After lunch, which in Italian terms means, “after we couldn’t possibly eat another bite,” we got in the car for a short drive to Mastroberardino’s new Radici resort which offers an excellent restaurant, beautiful rooms, garden pool area, and a golf course with driving range, all set among rolling vine-covered hills. The rooms are beautifully appointed, and each one styled differently, all with views of the countryside, and all with large, comfortable spa-like bathrooms. The pool area has room for entertainment (think summertime jazz concerts) and the golf course has nine holes, on its way to 18. The grounds are perfect for receptions and large parties with covered patios, grass and lots of mature trees to lend to the romantic setting.  We stopped into the restaurant, Morabianca, elegant and welcoming, with a menu that changes with the seasons.Professional staff and beautifully prepared traditional local cuisine offer a dining experience which, when paired with their wines, is something altogether special.

While my one friend has discovered new wines to enjoy, expanding her palate, the other is already creating a list of people to invite for a tasting dinner at Morabianca. We’re all sold on this Campania concept, and happy to see such a comprehensive experience available so close to Naples.  In my opinion, the comparison of Tuscany to Campania is like Napa to Monterey.  The smaller and perhaps less-visited regions offer everything the others have and more, like the ocean, diverse history, and closer attention to quality experience. Come to Campania and see for yourself, you won’t be disappointed.