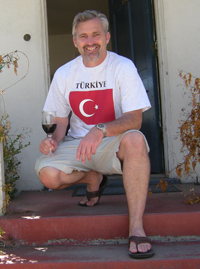 I’ve never been to Turkey, but I feel strangely drawn to this historic and enchanting country sandwiched between the Black Sea and Mediterranean Sea. Turkey has always been a grand gateway to the east with the glorious Istanbul as the jewel of the ancient empire, the epicenter of trade between Europe, Asia and North Africa for thousands of years. Some of the oldest known vineyards reside in eastern Turkey, and the very oldest commercially cultivated vines were found to be from this area of the world, in Iran, Georgia and Armenia in the Caucasus, dating back at least 5,000 years. These were mans first efforts at training vines and producing wines for trading, going both east and west. Turkey’s vineyards have a rich and underrated history, and its mystery is still being uncovered. Turkey is the fourth largest grape growing region in the world, though some 97% go to table grapes and raisin production. Plus Turkey is a mostly Muslim country that frowns on any and all alcohol consumption, though it founder Mustafa K. Ataturk was very much like our founding fathers, a man that believed in a secular government and promoted tolerance and equality.

Turkey’s wines are starting to gain attention, and there has been a new youth movement there with small estates staring to show real promise. I was impressed to hear that Jancis Robinson MW went to Turkey himself and came away with high regards for the wines she tried, and wrote very positive reviews both on her website and in the Financial Times, making me want to taste and visit Turkey even more. Turkey most surely has me spellbound and is luring me with its history, natural beauty, its people and now its wine, but in the meantime I have to settle for a local Turkish street fair.

Monterey held its Turkish Festival this last weekend, August 1 and 2, and I attended as I have a for the last few years and had a wonderful time learning about this amazing culture. A few friends have been to Turkey recently and came away with great impressions and tell wonderful tales of their senses being completely full-filled, with stories of spice, food, warm people and beautiful scenery and historic sights. This all makes me long to see the Blue Mosque, the bazaars and cafes of old Istanbul. All this was going through my head as I watched Turkish folk dancing, smelling kebabs, grilled meats, and sweet Turkish coffee brewing. Being the brave wine geek I am I also tried some Turkish wines, with good results! The white I tried was pretty generic and dull, but well made and refreshing on this warm sunny day. It was the red that impressed me more with a purple hue and clean flavors it was very enjoyable and I certainly would drink it again, and did! I know it was a co-op style brand that for the most part would be normally found in cheap ethnic grocers or restaurants, but really is was quite good, no question and left me wanting more. It was much better than Greek wines, and more interesting than other wines I’ve tried from the Caucasus Mountain regions and other eastern areas.

2007 Yakut Kavaklidere Öküzgözü d’ Elazığ Province, Eastern Anatolia, Red Wine, Turkey.
Öküzgözü is the grape, it literally means “Ox Eye” and it is a large sized native variety mostly grown in the ancient region near the Euphrates River. This area is one of the oldest growing regions along with the Caucasus countries like Georgia, Iran and Armenia. This region north of the Taurus Mountains is a harsh climate, but has history on its side. This wine, which is imported to the US, mostly to Turkish restaurants, is from a more generic producer, but I can say it is a well-made and interesting wine. I found full flavors and good rich mouth feel with clean red berry fruit and dark color. The wine reminds of Zinfandel or a Cotes-du-Rhone, showing some boysenberry, raspberry, plum and blackcurrants with a nice spicy element. Really, I quite enjoyed this wine and can easily imagine drinking this wine before most Chianti or the like and it would be great with lamb kebabs or pizza. ($12-16 Est.) 88-89 Points, grapelive