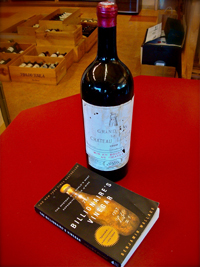 Greed, Vanity, International Intrigue, Arrogance and Fraud…. You’d think I was talking about the global economic crisis, the US banking bailout or the total failure of the Republican Party, but alas I am really reflecting on the great hoax that played out in the wine world. Benjamin Wallace’s book “Billionaire’s Vinegar” Crown Publishing 2008, unravels the mystery of some bottles that were supposed to have been purchased originally by Thomas Jefferson in France in the late 1700’s when he was there. Including a fake bottle of 1787 Chateau Lafite that sold for $156,000 at Christie’s Auction House in London on December 5, 1985, an event that set the wine world on its ear and set in motion one of the most fantastic tales ever in the wine business. Thomas Jefferson, former President, writer of the Declaration of Independence and America’s first “Wine Geek” toured France’s most famous vineyards and drank some great wines while doing so. Lucky for us Thomas Jefferson was a fanatic note taker and always printed second copies of his letters and documents, so we have some fantastic insight and records of what he liked and more importantly what he bought.
Wallace’s most impressive work and the painstaking research that was carried out in his chronicles brings to light many shams and lack of competence of the supposed experts in the rare and old wine auction business, but I would say it also makes clear that some of these mega rich wine collectors cared less about wine than they did for their egos, and that in most cases they most certainly were blinded by arrogance. Not to say they deserved to be taken by these con men and frauds, though the phrase “Buyer Beware” comes to mind. The book is full of humorous mockery and touches almost all the big players in the old wine market, plus some of the biggest names in the wine media too. No one seems untouched in these pages, from Michael Broadbent famed old wine expert and director of wine at Christie’s, Marvin Shanken of Wine Spectator, Robert Parker, Shady wine dealer “Hardy Rodenstock” to Malcolm Forbes the billionaire that had to have the 1787 Lafite “Jefferson Bottle” in the first place, and many more. Oh, I must also says some of the famed Chateaux were even fooled if not slightly involved too! It is a juicy tale that I will not spoil for you if you haven’t had a chance to read the book. So pick up a copy, it makes for a great summer read and will shine some historical light on some amazing tidbits of one of our founding fathers.