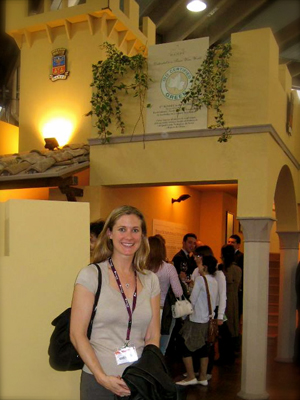 Despite my original intentions to take the day off from the expo, today was my “Winnie the Pooh-style” day of wandering, visiting and enjoying this Vinitaly experience.   After the fun and late night before, I slept in and was fortunate to get a ride from Piero, my host, to the expo as he was on his way to a family lunch near the lake (Garda).  I had one more Sicilian winery to visit upon recommendation, and that was Vini Biondi, where my hosts, Ciro and Stefanie cheerfully welcomed me.  This winery is in the high elevations of the Etna region of northeast Sicily, and even in this small area, I learned that there were significant differences in the soil from vineyard to vineyard.  The family has owned these vineyards since the 1600s and in the 1930s; wines brought by the grandfather to France for a competition received awards there.  The first of three wines I tasted was the Etna DOC Bianco called “Outis” which is ancient Greek for “Nessuno” which in Italian means “No one.”  They tell me that their desired name Nessuno was already registered as a wine name, something I have heard a few times while visiting the stands.  It is like domain names on the Internet, everything seems to be already taken.  This wine has a mellow floral aroma, and a slate-y taste (which I like) and a faint and amiable saltiness to it.  Next, I tried the “3 bicchiere” award winning 2005 Etna DOC Rosso, a blend of several indigenous grapes from various vineyards aged in used barriques.  With a slight salinity, this wine is smooth and acidic while still being enjoyable.  I then tasted the 2007 Cru, which will be called M.I. because due to regulations, they cannot use the geographical name, Monte Ilice for the wine.  This wine has not yet been bottled, and I thought it was exciting to get to taste something “pre-production.”   Aromas of orange blossom and honey gave way to a more earthy and dry savory herb taste and a simple but lingering finish.  Ciro and Stefanie recommend another winery in Piedmont whose owner likened these Sicilian wines to his own, even though they are at the two farthest points in the country.  This I had to see for myself.

On the way there, I stopped by the large castle display of Banfi and was able to talk with Alessandro, in charge of European sales, and taste some of the newer concepts at Banfi.  I learned that they make their own barriques, something no other Italian wineries do, in order to control the aging and toasting of the wood (preferring lower heat for longer periods) for extracting more delicate flavors.  The philosophy of this large label which produces over 40 wines, is to treat each estate as a boutique winery, as if each were its own and not part of a larger group.  We start tasting with the 2008 Centine Bianco, an every day drinking wine with appealing mineral and citrus fruit aromas and a soft peach flavor that also has a nice balance of flavor and acidity.  Next we tried the Belnero Toscana IGT, a blend of Cabernet, Merlot and Sangiovese.  Alessandro tells me this is their modern concept of Sangiovese and corresponds to the research they did when developing the Poggio al Muro Brunello.  I enjoyed the aromas of coffee and chocolate, as well as the softness and fullness on the palate.  To compare, we then tasted the just-released 2004 Poggio al Muro Brunello di Montalcino, which received 94 points from Wine Spectator.  This wine is a deep garnet color with strong tobacco and spice aromas.  The taste was bold in the mouth, issuing flavors of ripe dark cherry and coffee.    I am thinking back to my birthday and the bottle of Banfi Brunello that we enjoyed with dinner, and smiling.  I love that these people are so passionate about making and developing wine!

Feeling hungry, I made my way to the little bar for a sandwich and took it to the lounge to eat in peace.  I am amazed at my diet in recent days, mostly bread, which is the polar opposite to my normal gluten-free regime.  Maybe like re-setting my watch to the current time zone, my body has been reset for the current food zone. 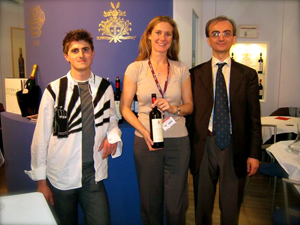 My next visit was to the Sella Wine Estates in Piedmont, where Gioachino Sella greets me and introduces me to their terrior by way of two bowls of soil sitting at the tasting table, one full of rocks and decomposed granite and the other, full of grey sand.  This is going to be interesting, I thought.   As beautiful pictures of the estates fade in and out in a digital picture frame, I learn that the Sella family has produced wine from their own vineyards since 1671 and is one of the oldest active Italian wine producers, with bottles still in their cellars dating as far back as 1881.   That IS interesting!  I read in their brochure that the estate maintains its original artisan scale and produces only limited amounts of quality wine.  Also, that they produce in a classical style (not to be confused with “old”) which to them means that the most authentic characteristics of the terroir and the vines are brought forward and aged in neutral wood.

I begin tasting a range of 9 wines with the Doranda Coste della Sesia DOC, made from 100% Erbaluce grapes.  This is their only white wine, and a grape indigenous to Piedmont that I have never tasted.  It offers aromas of almond and wildflowers, and a richness that surprises me.  Next, the Nebbiolo Rose which has not been bottled yet, then on to the blends where I taste for the first time the Croatina grape with its strong tannins.  Then, another first, the taste and aroma of iron and rust found in the signature wines made from 80% Nebbiolo and 20% Vespolina grapes.  This is a new sensation for me, and it was the “I Porfidi” with an addition of 20% Croatina that won me over to the taste which is enhanced by the flavors of blueberry and vanilla.  This wine’s 2003 vintage won the “3 bicchiere” award by Gambero Rosso.  As I am writing this, I can hardly read my notes…it must be because I was tired or writing furiously.  Yes, I’ll stick with that.

After thanking my hosts, I continued on my Winnie the Pooh day and stopped by the Batasiolo booth to thank them for the dinner and fun the night before.  Again, I found myself admiring the friendliness and “joi de vivre” that is found in the people there.  I look forward to visiting them in May as I make my way through Piedmont, Torino and the neighboring towns. 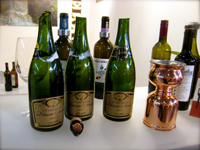 Now, as in any good Pooh story, there must be some element of adventure or surprise.  On my way out of the pavilion, I stopped to take a photo of a particular stand and noticed that something hit my foot.  I looked down and saw a champagne cork that was still surrounded by the neck of the bottle.  Of course, I knew how this had happened, as I happen to be quite adept at shearing the top of a champagne bottle with a sabre.  I could hear some commotion around the corner, so I picked up the cork and walked over to the group and asked, “Is this yours?”  A little embarrassed, they apologized and sweetened the deal by offering me a glass of their champagne.  Fair enough.  It was the first thing I had liked and didn’t have to spit out that day, and it was kind of nice to enjoy the “end-of-the-day” atmosphere.

When it comes to classifying myself as one of the Pooh characters, my friends and family would probably choose rabbit (on bad days) or piglet, but today I was a relaxed and jovial Pooh, and proud of it.  Unfortunately if I ever write a cooking book, I won’t be able to use the title “Cooking with Pooh” because it is already taken!  I am not kidding, you can look it up.