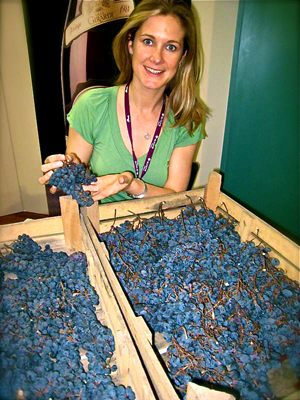 Sunday night there was an earthquake.  When it happened, I was surprised to feel it, and concerned because the apartment where I am staying is on the 5th floor.  Luckily my host was still up working as well, and we checked the Internet for any news, but couldn’t find anything at the time.  Coming from the central coast of California, I am accustomed to little local earthquakes that rumble but do little damage, so I didn’t stop to think about the destruction that might have happened elsewhere.  After checking the news one last time, we both went to sleep, and it wasn’t until the next morning that we knew what had really happened.  The photos tell such a sad story, and when I left the house for the expo, there was a tangible sadness and hurt that permeated throughout the city.  I could hear the many conversations taking place at the bar where I had my breakfast of cappuccino and croissant; people discussing friends and relatives near the area, their attempts to contact them, and prayers for their safety.

It was a quieter day at Vinitaly, and during my first appointment with Luca Currado, winemaker for Vietti in Piedmont, there was a minute of silence.  Luca’s wife was frustrated that the lights were not dimmed during the silence, as I was by the handful of people talking and going about their business.   Luca a 3rd generation family member, talked a bit about their philosophy at Vietti, and I continue to be impressed by this winery after being introduced to them 7 years ago by friends in Austria.   The family’s mission was to bring the winery to a higher level by expressing their passion for terroir.  Luca, who honed his winemaking skills in Bordeaux and California, saw that the “Revolution” of Nebbiolo, creating Barbaresco and Barolo, left the other Piedmont grapes Barbera and Dolcetto behind.  It wasn’t thought that Barbera could be a truly great wine, and therefore the grapes were previously planted in poorer areas that wouldn’t sustain great Nebbiolo vines.  But, after a huge financial investment and leap of faith by Vietti, Barbera and Dolcetto were planted in supreme locations, and, combined with good winemaking, the result was a “wow factor” especially for young wine drinkers, looking for value and quality when purchasing wine.  I revisit my comparison between Barbera d’Asti and d’Alba with the La Crena, and Tre Vigne, respectively, and again conclude that I prefer the Alba.   Luca jokingly tells me he likens the Alba to Grace Kelly and the Asti to Angelina Jolie, which I think perfectly, emphasizes my choice.  Grace Kelly was an elegant classic with a slight edge.  The other wine to result from this investment, the Dolcetto, is wonderful and a must-try, with bright aromas of licorice and berries, and a juicy fresh fruit flavor and a long, perfumed finish.  Not only is Vietti fortunate that this investment paid off with beautiful wines, but we, the consumers are as well, and should be thankful for this undertaking. 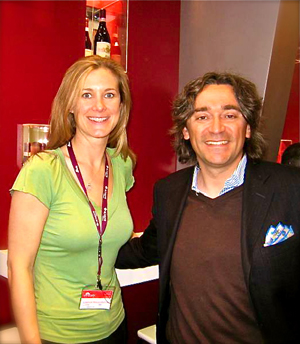 Another prize for Barolo lovers looking for a great value is the Nebbiolo Perbacco, a very important production for the winery (and wine drinkers as well.)  After the grapes for the Grande Cru Castiglione Barolo (from different vineyards) are crushed and aged according to Barolo regulation, the top barrels are selected for blending, and the “leftover” wine that can legally be classified as Barolo is bottled as the Perbacco.  Why?  Simply because Vietti refuses to make a regular Barolo, so they instead make a spectacular Nebbiolo that shouts aromas of leather and vanilla and flavors of toasted vanilla and strawberry ending in a fruity and tannic finish.  This “Baby Barolo” retails for under $25, and should be considered an extreme value.  I was lucky enough to finish our discussion and tasting with the three single vineyard Barolos, Rocche, Brunate and Lazzarito, named for the hospital nearby which was a refuge for sufferers of the Black Plague.  The hospital builders decided that anyplace that had a history (in 1640!) of producing such beautiful wines, it should be a good place for health and healing.  I want to note here that I was very lucky to have had some time with Luca during Vinitaly, and actually got the appointment because I mentioned to his wife the day before that I had met him a couple of months ago in Las Vegas at a tasting at the Double Helix wine bar at the Palazzo.  I had attended the $5 weekly wine tasting because I saw that Vietti was the featured wine, and was shocked to have the chance, with only 15 other people, to meet the winemaker…and have him sign a bottle of wine!  So, support your local wine shop, wherever you are, because you never know what kind of opportunities will be uncorked.

Since this was the last day of Vinitaly, I knew I had limited time to get two more tastings in, at Villa Girardi, owned by the famous Tommasi family, and Antinori’s group of wineries.  I headed to Villa Girardi first, where Franco Tommasi, whom I saw briefly the other day, greeted me warmly.  I started with the whites, which Franco told me are what the people of Verona (Veronese) drink in the morning, because they do not need food to be delicious.  I love the Soave of course, but also enjoy the Santa Giustina blend of Garganega, Tokai and Malvasia that offers explosive flavor without sweetness.  I also enjoy the unrecognizable “I Mulini” Pinot Grigio, a delicious departure from other over-marketed brands.  We move on to the Bardolino, an easy-drinking favorite of mine, which I think goes very well with Thanksgiving dinner.  We move forward to the Valpolicella and then the Ripasso, and Franco takes out the crates of shriveling grapes that he has on display to explain how the grape clusters are cut and dried until they lose 40% of their weight.  This was a good visual because I had previously pictured the “dried” grapes as looking more like raisins.  From the first crushing comes the prized Amarone with its intense aromas of tobacco, clove and cherry jam, then pleasant prune flavors and a lingering finish.  I am familiar with the family’s Tommasi Amarone Classico and am further impressed with the Villa Girardi expression of this wine.  Franco can see my eyes glazing over and brings me a plate of Parma ham, cheese and bread and says, “take 5 minutes and relax, I’ll be back,” what a gem.  I eat like a starved prisoner, and it is hard not to pick up the glass of wine and enjoy sips with this meal.

I leave refreshed and take a brisk walk over to the Tuscany pavilion to find the Antinori booths. My contact there was not available, but Rita came to walk me through a tasting of some of their selections from the “La Braccesca” label, whose Vino Nobile di Montepulciano holds a special place in my heart because my best friend and I shared a bottle over dinner after she had guided me through the Uffizi Gallery’s masterpieces as only an artist could.  I saw things that day that I had never seen in four previous visits, little secrets left behind by the renaissance artists 400 years ago.  I was lucky enough to try three of their most special wines, the Chianti Classico Cru “Badia a Passignano” and the “Super Tuscans” of Tignanello estate, Tignanello and Solaia, ones that other tasters asked for but were denied.  I think that made them taste even better, but they really did not need any help in the first place.  I particularly liked the Solaia’s woodsy and mushroom flavors and dense garnet color.  The base of this wine is mostly Cabernet Sauvignon, while Tignanello has a higher percentage of Sangiovese.

Afterward, Rita took me to another stand housing their new winery in Puglia, Tormaresca, where Francesco Domini poured some impressive whites and reds, and a delicious not-yet-exported Calafuria Rose from Negroamaro grapes.  Of the whites, including the Pietrabianca Chardonnay and Fiano blend, I thoroughly enjoyed “wow” aromas of apple and citrus from the Chardonnay IGT and its crisp flavors of pear and apple.  This wine is fermented in barrels then aged in stainless steel before bottling and this makes an altogether different and delicious Chardonnay, for those of you looking for a fresh take on an old favorite.  My favorite of the reds was the Bocca di Lupo estate Castel del Monte Aglianico, which I found to be quite different from those of Campagna, and very elegant.  Francesco tells me that this is due to the lower altitudes and rockier soil than their northwestern neighbor.   This full-bodied wine is full of fruit and spice, with nicely balanced tannins.

Though I think I am not quite ready to end my experience at Vinitaly, stands are packing up and partying has broken out.  To be honest, I am not sure that I could taste another wine.  The Abruzzo pavilion is empty, as the exhibitors have returned to their region I am sure with anxious hearts, and I hope they are able to soon find some peace after this tragedy.