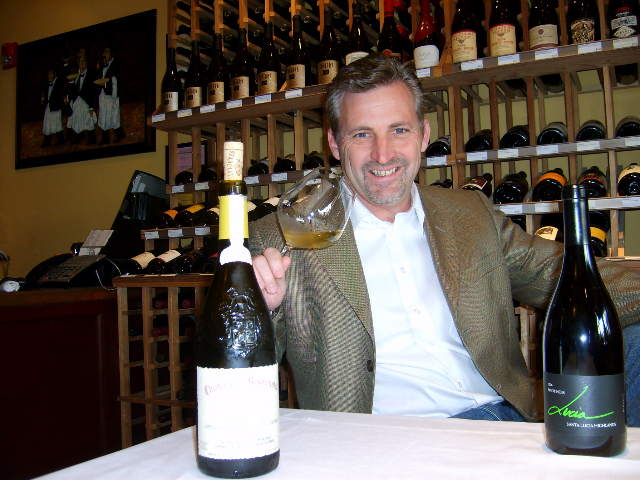 As the economy gets bleak and the dollar becomes even weaker we need something to smile about, and the magic of Spring and wine do just that. Now we’ve had a pretty nice bit of weather, though some cold nights have played havoc with some vineyards with wide spread frost damage cutting down the crop level as much as 20% in some areas, we are still at some really nice fruit sets, so keep your fingers crossed. But, I am grateful for the longer days and clear sky, as it has brightened my spirits and then there is the amazing array of beautiful wines coming to market. Check out the Reviews Page for the latest!

Local to me, here in Monterey there has been some great news and events happening and the wine business here has been buzzing for the last month. The new Pebble Beach Food & Wine event went off without a hitch and has shown what can be done when your heart is really in it, so kudos to the people behind it for their faith and hard work, it paid off for sure. It was amazing to see the greatest figures in the food and wine biz all out on the town here on the Monterey Peninsula, especially for me when I got to meet up with a couple of my hero’s like Mike Etzel of Beaux Freres, and August Kesseler, of August Kesseler, Germany to to name a few. That was some week here and I’m glad to report that it is going to go on for many years to come.

As for great news, Talbott Vineyards just announce they hired Dan Karlsen as winemaker! Dan is great talent and a super person and I was very happy to hear of his appointment as consulting winemaker at Talbott. Talbott has been know for fantastic Chardonnay, really world class stuff, but have at times really missed the mark on their Pinot Noir and with Dan on board this looks to be a thing of the past. Dan’s touch with Pinot and his vast vineyard skills will surely produce whole new era at Talbott, and I can’t wait! Here is Talbott’s Press Release in full:

Karlsen brings three decades of experience to his role as consulting winemaker for Talbott Vineyards. He began his career in 1980, working with David Stare at Dry Creek Vineyard. Throughout the ’80 and ’90s, Karlsen honed his skills making Chardonnay and Pinot Noir working at Dehlinger Winery, and later as the winemaker for Domaine Carneros. In 1998, Karlsen was named winemaker and general manager for Monterey County’s Chalone Winery, a position he held until 2007, when he left to focus on his own small label. In addition to farming his Monterey County vineyard and making his own wines, Karlsen is also the winemaker for Graff Family Vineyard.

“Dan is a gifted winemaker,” says founder Robb Talbott, “with a reputation for excellence. He also has a deep understanding of Monterey County winegrowing. His handcrafted approach to winemaking and his background working with exceptional estate-grown fruit makes him a natural fit for Talbott. We are thrilled to name him as our consulting winemaker.”

Talbott Vineyards was founded in 1982, when Robb Talbott personally planted his mountainous Diamond T Vineyard to the Corton-Charlemagne clone of Chardonnay. Today, Talbott Vineyards’ acclaimed estate program encompasses two of Monterey County’s most esteemed winegrowing areas: the Santa Lucia Highlands, where Talbott’s Sleepy Hollow and River Road vineyards are located, and the Carmel Valley, which is home to Diamond T. From this world-class palette of estate fruit, Talbott Vineyards crafts Burgundian-inspired Chardonnays and Pinot Noirs that have earned a reputation for elegance and aging potential. Talbott Vineyards produces these wines under four labels: Talbott, Logan, Case, and Kali Hart.