Even though I’ve had some amazing opportunities this month with two stunning tastings that had a vertical retrospective of the late great Didier Dagueneau and a horizontal of the famed Oregon Pinot master Ken Wright’s (seen with me left) line of a single vineyard Pinot Noirs, it is the value wines that now take center stage. The global financial crisis is having a serious impact on the economy and is very scary indeed. As it was famously said; “it is the economy stupid”, even in the wine world, which usually holds its own during slow financial times, though this downturn is massive and I have noticed a big turn to sub $20 a bottle wine. So I’ve made a point of featuring some super wines that don’t break the bank and still leave you with a big grin after a glass or two. Some of my favorite value wines come from the Rhone Valley and other Southern France areas, as they offer ripe and richly flavored wines that are solidly made and easy to love. Then there is South America with wonderful wines coming from both Argentina and Chile, with Malbec and Syrah wines impressing lately.  Then there is Spain and Italy for values, with even the Islands of Sardinia and Sicily giving wines of top quality at everyday prices, including one of my favorite wines, the Cannonau di Sardegna made from old Grenache vines. That said, top end wines are still doing well and the blue chip investment wines from the top domaines and chateaux are still looking to be solid bets and prices have even gone up on California Cabernets…

For some good value selections check out my latest REVIEWS 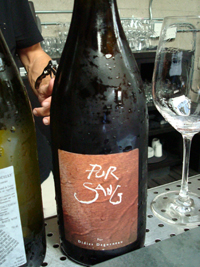 It was a very sad day a little over a month ago when the news came in that Didier Dagueneau had died in a single engine plane crash in his native France. Dagueneau was renown for perfecting bio-dynamically made Pouilly-Fume to the point of beyond perfection, making some of the great wines ever produced from his loved Sauvignon Blanc grapes. He looked and acted something between a caveman and a rock star, but was a driven and intense character that was never shy when it came to his self believe and or views on winemaking. His wines are a true reflection of his terroir and his personality! I never got to meet the man, but I have been luck enough to taste his artwork and I can tell you he was an artist and that his wines are totally unique in flavors and are almost impossible to fairly review or relate to you. They are such different animals each vintage and taste like no other Sauvignon Blancs I’ve ever tried, as they are pure and true to vintage and terroir completely. His top two wines from his Loire Valley vineyards, the “Silex” and “Pur Sang” though signed by the same artist seem very different wines and go a long way to showcase the slightly different soils and climate, even though the sites are not so far away as to make one think there would be such a difference. I found the “Pur Sang” to have a smoky citrus and liquid mineral note, while the “Silex” showed an earthy quince and stone fruit quality. All the wines I tasted all showed something special and it was a once in a lifetime event to try some 15 wines, from 1994 to 2006. In my notes I had extra special stars for the 1999 Pur Sang, 2001 Silex, 2003 Pur Sang, 2005 Silex and the near perfect 2006 Pur Sang.

The only slight blemish on my Oregon adventure in September was that I missed catching up with the godfather of Oregon Pinot Ken Wright, so I was glad to put that right last week when Ken Wright was pouring his full line up of Pinot Noir at a special tasting of new world Pinot Noir in San Francisco. I had met Ken before and have always held him and his wines in high esteem, in fact his energy and passion during a seminar a few years ago helped me understand his region and gave me an extra insight and affection for the Willamette Valley and its wines. At this tasting, Ken was engaging and patient with me, explaining each vineyard in detail and what he likes best about each site and what special characteristics they impart on the finished wine. I am grateful he took the time and gave me his full attention, it is a rare thing at these tastings and it is the extra special effort that sets him apart. All this focus and intensity goes into each of his wines and I can honestly say it makes a great difference. Wright showed his 10 different single vineyard Pinot Noirs, all of which highlighted their terroir and were each unique. His line up of 2007 wines are going to be released between now and December and do show the vintage’s more Burgundy like profiles with higher acid and delicate fruit. These are more a winemaker’s vintage than the blockbuster ripe 2006 wines were, but should be very enjoyable for true Pinot lovers. The wines are young and will fill out over the next few years, though there are a couple that are easy to enjoy now, especially the up front and fruit driven Shea Vineyard and the lovely and textured McCrone Vineyard, both of which impressed me a lot! Others to stand out were; the Nysa Vineyard from the Dundee Hills, the Savoya Vineyard from Yamhill, and the Carter Vineyard in the Eola Hills area, all of which are lovely wines that should gain with a little cellar time.