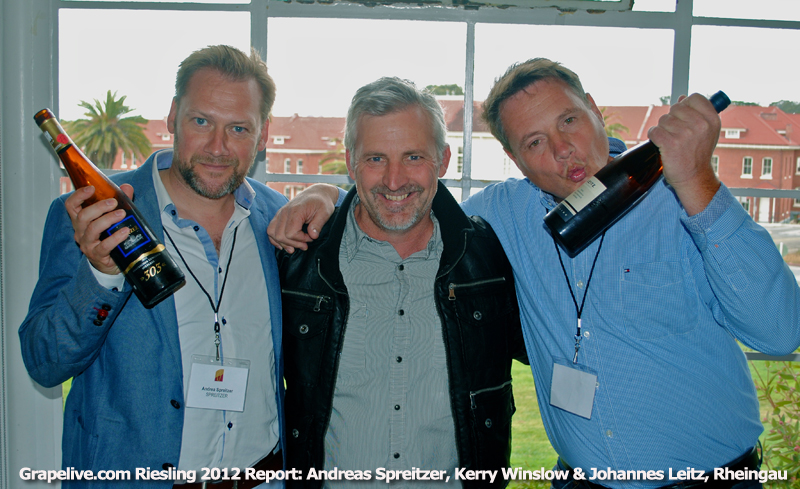 The vintage 2012 looks set to be a classic in Germany, though far from easy and one that ultimately ended up great, though there is going to be much less wine on offer as crops were limited, so be sure to grab what you can on release, especially in the Mosel, Nahe, Pfalz and certainly the Rheingau region, a place that has become dear to me after a fantastic visit there in 2009. 2012 follows on the heels of 2011 a hugely successful vintage, which was thought a tough act to follow, but in which 2012 has got covered in many respects, even though the wines do not seem as open as of yet, the potential looks a tad better, especial in the dry wines, and the Rheingau has plenty to showcase, like the follow wines from Leitz and Spreitzer, two influential producers in the famed region.

Rudesheim on the Rhein is a spectacular wine destination and Germany as a whole makes for great vacations with easy transport, friendly people and beautiful landscapes. The food is often dismissed, but this is unbelievably wrong, Germany is home to some of the most innovative and quality cuisine in Europe, and don’t forget white asparagus (spargel in German) which is a springtime delicacy to die for. The Rheingau’s dramatic riverscape views and hiking trails make for a paradise in this world class wine region, known for it’s diversity of soils and terrors along the famous river with wonderful Rieslings and some rare and majestic Pinot Noirs, especially from the Hollenberg site in Assmannhausen which is one of the best Pinot Noir areas outside of the Cote de Nuits! But it is Riesling that that is king here and has been since pre Roman times, and for near a thousand years Rheingau Riesling was the world’s greatest white wine, and for many it still is or should be.

Riesling, as I have mentioned a few times before, is now the best buy in wine to cellar, we are talking a drinking cellar of course, these wines drink great throughout there lives and age almost forever, whether dry or sweet these are bullet proof sure thing hits for anyone wanting to build a worthwhile collection of drinking wines. Riesling’s high acidity can carry both sugar and extract, making for long lived and balanced wines.

2012 is a dry Riesling lovers dream year and the Rheingau looks to have excelled in fine dry wines, and two producers that achieved remarkable results are the famed Johannes Leitz, who is no stranger to great critical acclaim, and Andreas Spreitzer who is continuing to climb the ranks of the premier echelon of winemakers. I recently got to catch up with these two at a preview of German wines from the 2012 vintage in San Francisco at which both were showing off their latest creations to the trade. There is already tons of hype around the year, with many people regarding it as one of the best ever, so it was interesting to sample a large selection of this vintage, and while most of the winemakers were humble, there was lots of excitement in their eyes and after a little prodding they do believe this is a very special year, and from my own point of view, I think the hype is well deserved. I may have some experience, but I’ll defer to the more elder experts about where this year ranks on the greatness level, though I’ll agree at least this is a fantastic year for the dry wines, one of the best I can remember no question.

Johannes Leitz’s lineup is top notch from top to bottom, and I’ve always been a huge fan, these wines scream quality and consistently are some of the best in Germany let alone the Rheingau. The Leitz wines from Rudesheim come from some of the most beautiful slopes on the Rhein, and having hiked them for miles on end, I must admit to being thoroughly biased in my love of these wines, and Leitz’s do sing a sirens song to me and are some of the most treasured experiences I have in wine drinking. Regardless of my own favorites, Johannes Leitz crafts fantastic wines and these 2012 are some of the best yet, no question. Of his impressive selection, I would single out three outstanding wines that are mightily impressive.

2012 Weingut Leitz, Riesling Estate Rudesheimer Trocken, Rheingau Germany.
A bit more serious than his Leitz Out and a touch drier than Dragonstone, the Rudesheimer Trocken is a stunning value in Leitz’s all star lineup for 2012 and is a wine to stock up on for short to midterm drinking. Coming off vines from Bischofsberg, this bright and savory Riesling has plenty of extract and pleasing fruit to do the trick, this is a finely judged wine with a wonderful balance of sweet and sour elements. The nose is still a touch shy, but the palate is electricly charged with vibrant lime, lemon and grapefruit while smoky mineral notes, peach, mango and saline add character. This charming wine has touches of earth, herbs and mint tea and after some air a tangy apricot aftertaste lingers. This is a friendly dry Riesling that is easy to enjoy now, but it should be at it’s best between 2014-2018, though I know I won’t wait to long myself.
($22 Est.) 91-92 Points, grapelive

2012 Weingut Leitz, Riesling Rudesheimer Magdalenenkreutz Spatlese, Rheingau Germany.
The “Maggie” Spatlese is always one of my favorite wines year after year, and while I couldn’t get enough of the 2009 and 2011, the 2012 is maybe even better still with plenty of lush extract, sweet fruit and loaded with juicy acidity, this is stunning wine at a stupidly fair price, I mean to say, this wine is a steal! Here is a classic example of why German Riesling is one of the best wine investments you can make, for a drinking cellar, putting a case away of this wine would pay off huge in terms of value and pleasure, especially as this wine has most likely a 15 to 20 year life ahead of it. I certainly will be signing up for some, putting my money where my mouth is, and I recommend getting on board the Riesling love train yourself. The 2012 Leitz Rudesheimer Magdalenenkreuz Spatlese leads with a heady bouquet, that needs coaxing still, of fresh cut roses, orange flowers and tropical essences with a firm streak of flint, spice and yellow fruit leading to a brisk palate of vivid crystalline citrus, mineral and fleshy stone fruit with mango, pineapple adding exotic character while smoky slate and salty essences add classic terroir. While a true sweetie, this Spatlese is pure class and balanced to perfection. Everything is here, everything is controlled and everything is delicious, bravo. The fall 2013 release can’t come soon enough.
($24 Est.) 94 Points, grapelive

2012 Weingut Leitz, Riesling Rudesheimer Berg Roseneck “Katerloch” Rheingau Germany.
Trying to pick of favorite of Leitz’s top dry cru wines is damn near impossible, honestly these are all unique and utterly fascinating wines that rival anything from anywhere, these crus just continue to get better and better and 2012 is one of the best vintages to explore these dry Rieslings from the hills above the Rhein River. Okay, that was a long sentence, but I’m sure you get the idea, Leitz Riesling is a bucket list wine and especially intriguing is the lovely and intense 2012 Leitz Riesling Rudesheimer Berg Roseneck “Katerloch” which is a fantastic example of German dry wine. This finely tuned Riesling bursts from the glass with smoky flint, red pepper spices and cool stone fruits, while the nose has white flowers and crushed stones the palate showcases the Roseneck terroir with full flavors of yellow peach, white currant, lime and powerful extract. This wine has total impact, force and firmness, a classic Riesling powerhouse and a wine of sublime character, this is a wine for the ages. Lingering apricot, mango and grapefruit add to the complete lustiness of this marvelous dry wine.
($42 Est.) 95 Points, grapelive

Andreas Spritzer is an up and coming vintner, as his estate’s collection of 2012 wines are proof positive of their class and the potential here is huge, as these wines show. Spreitzer’s talents are on full display in the lineup of 2012, especially his top end crus of which are now full fledged Grosses Gewachs, or what we would call Grand Cru wines, of which can only be dry in style. The unique Loess and loam soils and terroir make Spreitzer’s Rieslings stand out, these are very different animals to other wines of the region, and these are powerful examples of this fine region and grape, here are a few of his wines to look for in this fantastic vintage.

2012 Weingut Spreitzer, Riesling “303” Oestricher Lenchen, Spatlese, Rheingau Germany.
This is Spreitzer’s signature classic Rheingau, and a thrilling expression of style and terroir with dynamic flavors, density and lush charms, while remaining balanced and focused throughout, this feels as weighty as ever, but in fact tastes drier than the 2009, 2010 or 2011 wines, echoing my my balanced comment. This is a powerhouse wine with a velvet cover, lovely and unique with yellow peach, mango and candied pineapple adding to the core of apple and zesty citrus fruitiness. The extract level feels high and there is a certain creaminess that is impressive too, but there is loads of zing and vibrant acidity along with a savory earthy loam character with hints of brine, sea salt and wild herbs. Wonderful length, especially in a young wine, there is massive aging potential here, fantastic effort, definitely a cellar selection.
($48 Est.) 93-95 Points, grapelive

2012 Weingut Spreitzer, Riesling, Wisselbrunnen Grosses Gewachs, Rheingau Germany.
The newly elevated Grand Cru Wisselbrunnen is one of the star dry wines of the vintage in the Rheingau and the Spreitzer family can really be proud of the majestic and powerful effort that is this wine, this is what all the buzz is about in modern dry German Riesling and right up there with some of the stars doing top echelon dry wines like Leitz, Donnhoff, Diel and others, this is a class act no question. Both the 2012 Grosses Gewachs I sampled this summer are stunning wines, it was hard to pick a favorite here, but in the end the flamboyant Wisselbrunnen got the nod, it is a massive and impressive wine with tons of dry extract and raw intensity, though some patience will be required here, it is another wine that should see a bit of cellaring. The nose has dried apricot, lime and smoky mineral essence with a full force palate of stinging acidity, earth and stones with loads of tangy fruit. Layers of lime, tangerine, white peach and pear all flow across the palate with a brisk dry sense of salt and spice finishing with length and lift. Drink 2014-2020, be sure to make note of Spreitzer’s Grosses Gewachs (Grand Crus) these are brilliant dry wines of charm and character.
($36 Est.) 93-94 Points, grapelive

2012 Weingut Spreitzer, Riesling, Winkeler Jesuitengarten Kabinett Halbtrocken, Rheingau Germany.
The sleeper in the Spreitzer lineup is the Winkeler Jesuitengarten Kabinett, this easy to enjoy Riesling does everything right and is very lovable right out of the bottle, but is serious in quality, it shows off this loess and loamy soil terroir well. Brightly fruited, entertaining and classy, the 2012 Spreitzer Kabinett is a joy with peaches, apple and tropical fruits leading the way, along worth hints of grapefruit, lime and saline coming through. Look for a bit more aromatics by this fall when it’s released and the touch of sweetness really makes for a pure and refreshing Riesling to be enjoyed over the next three to five years, though I expect it should age well for a decade at least. This playful and interesting Riesling is great first step into understanding the estate and terroir, be sure to check it out, and if you see 2009 or 2011 versions, snap them up too!
($22 Est.) 91+ Points, grapelive