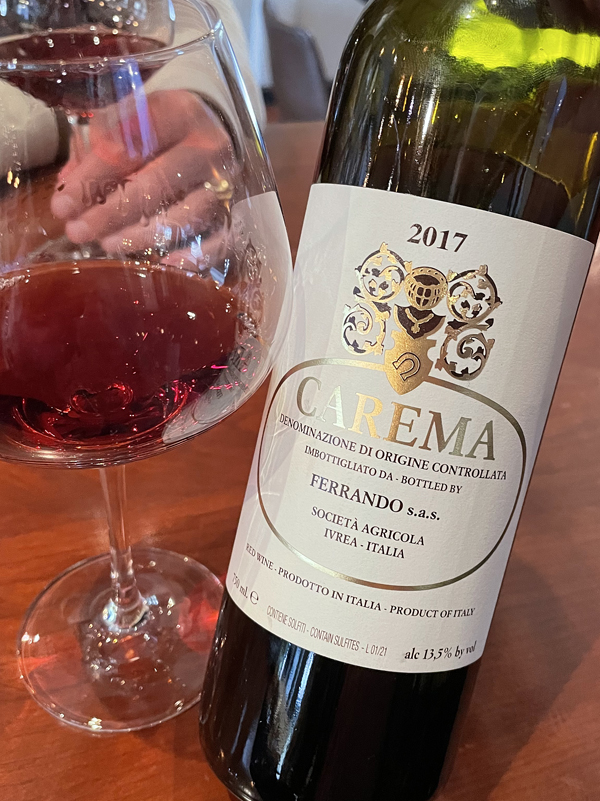 2017 Ferrando, Carema DOC, Etichetta Bianca, Piedmonte, Italy.
The Ferrando Carema is a beautifully crafted wine from high up in the Canavese district, near the lake country in the Alpine foothills north of Torino, it’s a place that has gained attention for Nebbiolo wines lately with wines that are now thought of in the same breath as the fabled Alba and Asti zones, with Ferrando crafting some of the most exciting expressions here. This 2017, which is traditionally made and reveals bright and earthy layers of pure Nebbiolo with a dark ruby and amber edged hue in the glass, it has a lean presence and it is best served with food and decanted to allow for it to fill out and round off the firm tannins. With air pretty details emerge with dried roses, minty herbs and mineral tones coming out on the nose and the medium bodied palate flows with black cherry, damson plum, cranberry and red currant fruits. The background complexity includes hints of anise, leather, cedar and burnt orange, making for a complete and interesting wine that certainly gets old school Nebbiolo lovers more curious about this region of northern Piedmonte. For this wine, Ferrando ferments the 100% de-stemmed grapes with indigenous yeasts in stainless-steel tanks before a gentle pressing to Slavonian oak botti (casks). These Nebbiolo vineyards, many steeply terraced, sit on the mountainside terroir of Carema, in an amphitheater that is not far from Monte Bianco and gets good exposure to the sun, giving these wines a chance to fully ripen, while maintaining vibrant acidity that gives these intriguing reds there life’s blood and age worthiness.The Carema DOC wines cannot be released until they have a minimum of four years of aging with Ferrando’s Etichetta Bianca seeing an elevage (aging) period of 30 to 36 months in mostly used barrels with a combination of sizes being employed to maximize the transparency of the Nebbiolo.

Luigi Ferrando has long been the leading producer of wines from the Canavese region where his family’s winemaking tradition goes back to 1900, making him a fifth generation producer in this region just above Turin, close to the Val d’Aoste in Italy’s top left corner. The Canavese, Carema and Caluso areas are set in beautiful hills, seeing cool nights and long growing season, with ancient soils left from a glacier, all these elements add to the complexity and mix layers of acidity, juicy fruit and mineral tones, making for very interesting wines. The Ferrando family, with a long history in the area, has been selling wines since before modern Italy got established, and there has been wine made here since Roman times. This area of Alto Piedomte is fast becoming a place that savvy wine buyers are looking at, because of the quality Nebbiolo wines, be it here in Carema or in the neighboring areas of Ghemme, Boca and Gattinara. I also really like their dry Erbaluce wines here too, it a little know white grape that was close to extinction less than a generation ago. Erbaluce produces the only white wines of this region, that has now been granted full DOCG status. The Erbaluce di Caluso, is the classic dry version, though there is Erbaluce di Caluso Spumante (Sparkling), and the sweet Erbaluce di Caluso Passito, all of these being exciting stuff. The winery also notes that old historical records show that Erbaluce’s virtues were touted and admired as early as 1606, and I highly recommend the Ferrando example. The winery says the Erbaluce name reflects the grassy, hay-like qualities of its flavors and aromas (Erbe … meaning grass or herbs) and its ability to capture and thrive on the light (Luce) from the sun that sweeps across these terraced hillsides. Ferrando’s parcels have the zone’s Glacial moraine and slate with vines averaging about 50 years old, all of which are hand tended. The appellation of Carema is just 40 acres, making these wines extremely rare, and Ferrando’s versions are on the more elegant and delicate side, as this delicious 2017 shows, but with potential to cellar for many years, best from 2024 to 2035.
($79 Est.) 92 Points, grapelive