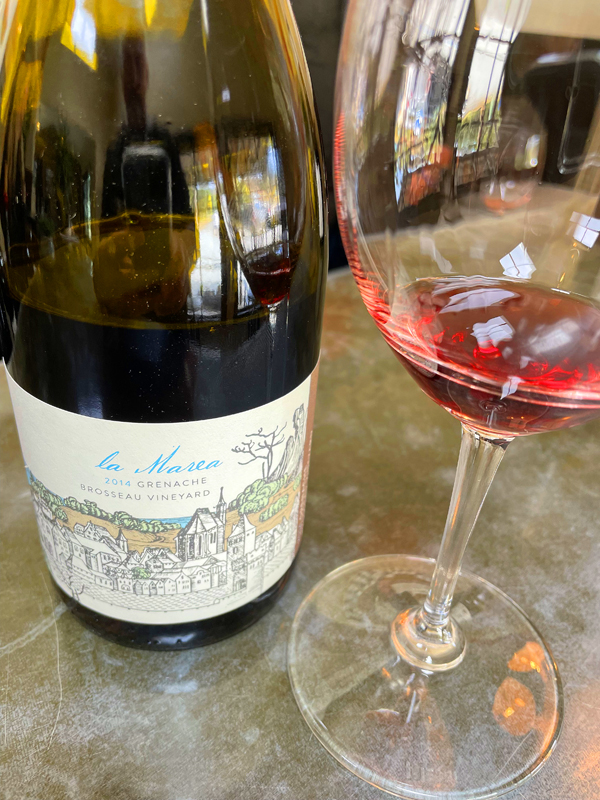 2014 La Marea, Grenache, Brosseau Vineyard, Chalone AVA, Monterey County.
The single vineyard 2014 Brosseau Grenache by Ian Brand under his La Marea label is drinking fantastically well right now, eight years on from the vintage with loads of personality and varietal character showing a dusty dry old world charm in the glass reminding me of some excellent Sierra de Gredos Garnachas. This wine, one of a few library releases that Brand has available, for me was a pleasant surprise and I love Grenache with some age, so I am thrilled that I got a chance to taste it recently, admiring its structure, color and vibrancy of fruit along with the secondary elements that are now in evidence on the medium bodied palate. The aromatics are lovely with brandied red cherries and porporri leading the way in this shiny ruby/garnet Grenache that has a mouthful of earthy plum, raspberry, pomegranate and strawberry fruits that are accented by chalky terroir driven stony background along with dried lavender, cinnamon, pepper and anise. The tannins, which were soft and sweet earlier have found a backbone and offer some fine grip here and the fruit has evolved and left its youthful lushness behind and is embracing maturity with grace, this wine is singing now and especially good with food, which allows the wine’s full depth to reveal itself. Finding and enjoying aged California Grenache is not all that easy, especially a lighter expression, like this LaMarea, but it has its rewards and I’ll be grabbing a few bottles to drink over the next couple of years as it continues to reach its full potential and subtly of form. Everything here excites the senses and the lingering kirsch and savory crunch makes this Brosseau Grenache a joy and a good companion with Mediterranean cuisine as well as hard sleep cheeses.

Ian Brand’s La Marea line, mostly know for its crisp Albarino, is his Spanish inspired collection of central coast offerings that has been refined to include two versions of the Albarino and an old vine Grenache, with the single site (Grenache) expressions now included in Brand’s signature I. Brand & Family series that now includes this Brosseau and the ancient vines at the Besson Vineyard. The Brosseau Vineyard is located in the Chalone AVA and is set on chalky limestone and decomposed granite soils with the Pinnacles National Park and Monument as the backdrop, it is a great source for Grenache and other Rhone grapes as well as Chardonnay and Pinot Noir, all of which Bill Brosseau farms organically. There is really a sense of place in the wines made from Brosseau fruit and this La Marea Grenache is a nicely cellared example of what to expect from this quality and distinctive vineyard that in the rolling hills of Chalone in the Gavilan Mountain Range that sees a wide swing in day to night temperatures that allows for complexity and balance. The Brosseau family began the transition to full organic farming practices back in 2006, the first to be certified in the region, and the results have been impressive to say the least, with Ian’s version of Grenache being a prime example of what this vineyard can deliver, especially in the cooler vintages that give this wine a delicacy that makes it have an almost Pinot Noir like class. Ian has refined his techniques over the years to promote purity with his Grenache getting indigenous yeast fermentation(s) and gentle maceration(s) with a good percentage of whole bunches before being pressed to neutral French oak for aging. The latest release of La Marea Grenache, the 2019 Central Coast, comes from a collection of old vine sites and is an exceptional value, it’s a wine that should be on your radar if you love Grenache in its freshest and juiciest best.
($30 Est.) 93 Points, grapelive