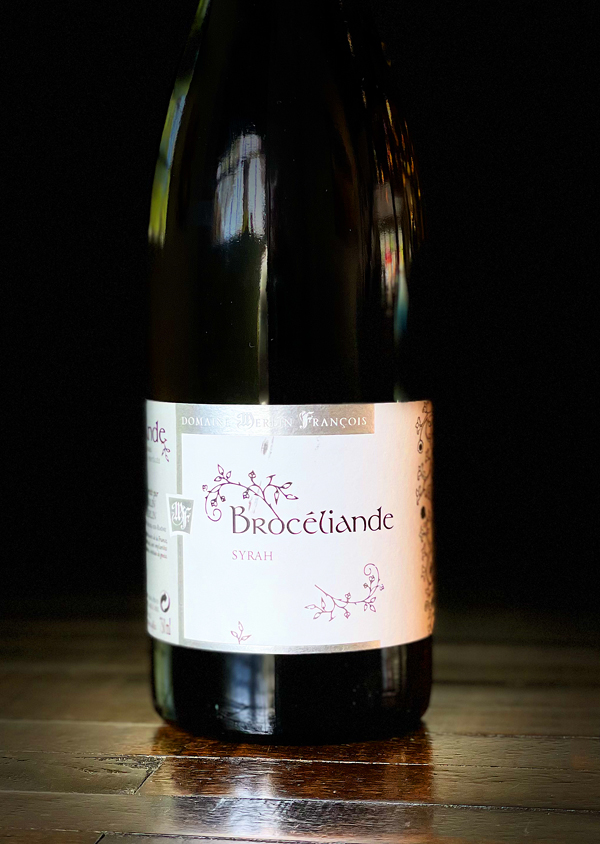 2018 Domaine François Merlin, Syrah “Broceliande” IGP Collines Rhodaniennes, Northern Rhone, France.
The brilliant, complex and meaty 2018 Broceliande Syrah from François Merlin is an absolute steal with pure terror and varietal character on full display, it is a medium to full bodied effort with layers of earthy blue fruits, bacon, smoky meat drippings, pepper, subtle floral tones and lingering creme de cassis and tarry licorice. Coming from vines between 20 and 60 years old and aged in used French oak barriques, François Merlin’s latest Broceliande gets better and better as it opens with boysenberry, damson plum, black cherry and an echo of currant fruits coming into focus on the palate along with snappy herbs and crushed violets, this is an old world Syrah that offers a tremendous value with a flavor profile that is very much inline with a Crozes-Hermitage that would cost you twice or three times the price. There is a lovely play between the supple fruit core and the savory elements, this is full of personality with rustic charms that does everything to tell you this is a Northern Rhone wines with its hints of sanguine iron rich mineral, a touch of funk and camphor, it is best to enjoy this with hearty cuisine, which would help bring out its pleasing fruit density. François has gained an admirable reputation as a grower producer in the Northern Rhone with some vineyards that he planted himself using ancient massele (Syrah) selections, in Saint-Joseph and in Cote-Rotie, he has refined his winemaking style, preferring riper de-stemmed fruit and an opulent elegance in his top bottlings.

François Merlin is a new discovery for me, this last year, and I’ve been very impressed by what I’ve tasted so far, this small domaine, run by Francois is a rarity here, being a first-generation Northern Rhône winemaker. He is the son of a chemical engineer, and he moved to Saint-Michel-sur-Rhône, just south of Condrieu, in 1989 to pursue a self taught dream of making wines in this historic region. He, as the winery notes, has officially never studied wine in school, but was mentored by some impressive names, including stints at Domaine René Rostaing, making Cote-Rotie, as well as learning about Condrieu at Georges Vernay, all of which shows in his wines. Now, François’s son Laurent, who studied viticulture has joined the family domaine in 2013 and has put in a huge effort in the vines here and it looks to have raised the game at Merlin, who now have a coveted array of parcels in top sites, including both Cote-Rotie and Condrieu, as well as vines in Saint-Joseph and areas without AOC status, like in this one. The farming is leaning towards organic, all sustainable with the grapes getting picked by hand, and, from I understand, the Merlin’s use of new oak has gradually been reduced, and they use the Austrian oak Stockinger demi-muids (mainly in their Condrieu) alongside the mostly used French barriques. The Broceliande is sourced from some sandy areas, some red clay, along with a galet stone covered mix of granite and decomposed gneiss soils. This dark garnet Syrah is too good to pass up on, I highly recommend these François Merlin wines, especially their Saint-Joseph Rouge, the Cote-Rotie which reviewed already, and this Syrah “Broceliande” IGP Collines Rhodaniennes that is itself a very tasty little treat!
($17 Est.) 92 Points, grapelive