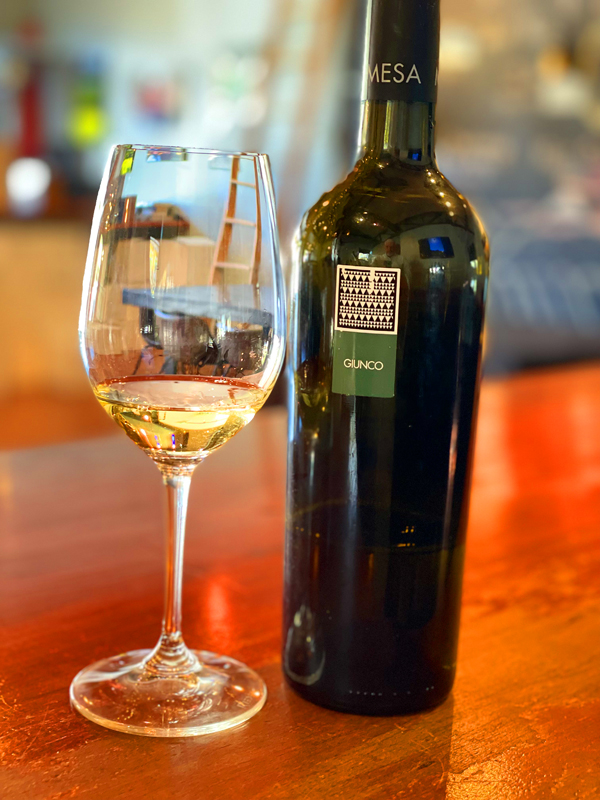 2016 Cantina Mesa, Giunco, Vermentino di Sardinia DOC, Sulcis, Sardinia, Italy.
The 2016 Giunco by Cantina Mesa is a pure and maturing Vermentino with lovely vibrancy, complexity and a fine stony quality, it delivers an almost Riesling like performance in the glass with bright acidity, a distinct, but delicate petrol note along with racy citrus and stone fruits leading the way on the light to medium bodied palate. There was a short period of cold skin contact that lasted about 48 hours, which adds depth, texture, color and a touch of phenolic savoriness that greatly enhance the personality of this Vermentino, making it even more intriguing as it gets age with an array of spices and tropical fruit in the background behind orangey layers of tangerine, dried apricot, mango and nectarine fruits, as well as flinty wet rock, tangy herbs, sea breeze and creamy verbena. The golden/straw hued white is evolving nicely and has plenty of charm and tanginess to go with a range of foods from sea food dishes, soft cheeses to roast chicken and or Middle Eastern cuisine. This was my first time tasting the Cantina Mesa wines and I was highly impressed with what I sampled here, the winery which was founded by Gavino Sanna, who wanted to create an estate that embodied the pride or soul of Sardinia. Cantina Mesa is now owned by the giant Santa Margherita and has an ultra modern facility, taking this label to the next level with a high quality collection of offerings, including a series of reds made from Cannonau di Sardegna DOC and Carignano del Sulcis DOC, as well as whites, like this one, made from Vermentino. Vermentino, a variety native of Liguria, where it is called Pigato, here in Sardinia, but is also successfully grown in Tuscany, Corsica, Piedmonte (Favorita), Provence and in the Southern Rhone Valley, as well as in the new world from Australia to California and Oregon.

Coming from the Sulcis area, in the far south west of Sardinia the Giunco is 100% Vermentino that is an all stainless steel fermented and aged wine that shows exceptional clarity, mineral intensity and has a crisp, salty freshness. The winery notes that the Vermentino for this Giunco grows on mainly sandy soils, and goes on to say it is made up of alluvial deposits and cemented aeolian sandstone with an underpinning of clay, with loam, formed during the Pleistocene era. These soils have a ph that is slightly alkaline, well-structured, with a good level of stony particles, rich in calcium, magnesium and potassium, all of which influences this wine’s character adding a bit of iodine and a chalky element. This is an island wine through and through with Mediterranean sense of place, the climate here is warm and dry, but gets frequent refreshing Mistral winds and cool nights that help give this Vermentino a fine balance and a zesty nature. The all hand picked grapes, which come from vines that are extremely close to the sea and at sea level, are chilled to 10 °C before de-stemming and then see a gentle pressing, with the mentioned skin contact and then the wine is raised for about four months of the lees before bottling to preserve the Giunco’s vitality. I am grateful to my Giuséppi Còssu, an Italian Sommelier and proud Sardinian, who is studying to be a winemaker and who has introduced me to some unique Sardinian wines as well as providing me a good winemaking background of this beautiful island, which has an incredible amount of history of wine growing, which goes back thousands of years, thank you my friend. Vermintino, which is now grown around the world, is now making a name for itself here in California, but is more commonly seen in Italy and France, where it is sometimes called Rolle. The winery says to drink this wine up while young, in the first 2 to 4 years, but I find this 2016 to be in a great spot right now and think it can go another few years.
($22 Est.) 92 Points, grapelive