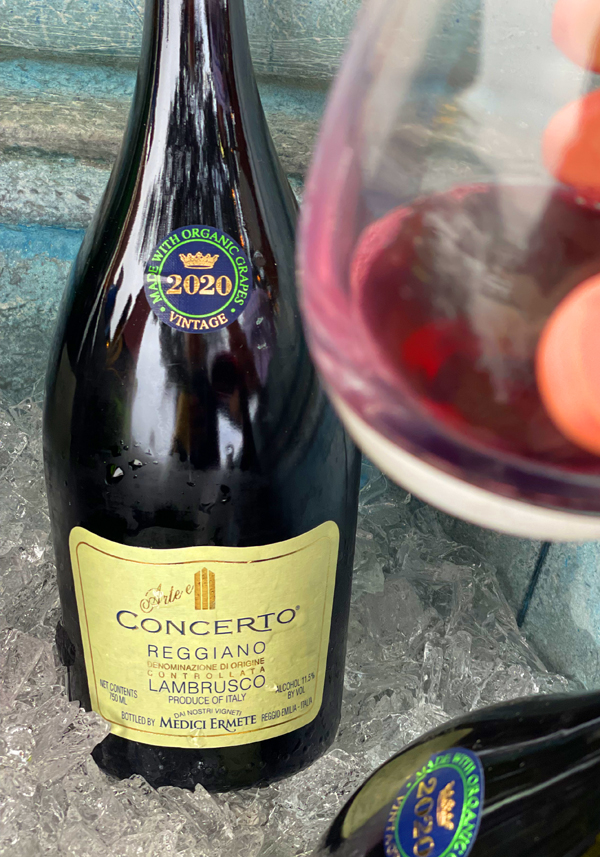 2020 Medici Ermete, Concerto, Dry Lambrusco Reggiano DOC, Emilia-Romagna, Italy.
This ancient sparkling red, Lambrusco wine, comes from near Modena in the region of Emilia-Romagna and once thought to be a workers wine and shunned by the outside world has now seen an amazing rise in quality, and with an embracement of organic farming, as this tasty dark fruited Medici Ermete Concerto shows. This wine made from the Lambrusco Salamino grape at the winery’s Tenuta La Rampata property with this being sparkling dry red bubbly that was fermented in stainless steel tank to promote fresh flavors and purity in the glass with a delicate floral note and a classic meatiness along with crushed blackberry, cherry and plum fruits that are accented by brambly spices, mineral and a touch of loamy earth. The mousse is vibrant and zesty, but the tannin structure is satiny, supple and creamy, providing balance and a pleasing form, this Lambrusco is most tasty with simple and hearty cuisine, including as the winery suggests, meat, such as salami from Felino, mortadella, culatello (salami made of lean ham), raw ham, tortellini and cappelletti (stuffed pasta) in broth, lasagne, tagliatelle pasta with meat sauce, and or tortelli stuffed with pumpkin and spices. The Salamino grape, an ancient native red varietal, is most often found in Emilia-Romagna and Lombardy, it derives its name from its cluster which is very tight and cylindrical, so much so it resembles the shape of a small salami.

The Medici family, which founded production of local wines here in Emilia-Romagna back in 1890 with a few taverns originally established by Remigio Medici, but really became a winery of note under his son Ermete, who expanded the family vineyards, which are located between the Via Emilia and the foothills of the Enza valley. After which a steady rise in quality made them one of the go to labels in the Lambrusco zone, but things got much better in recent times with the conversion to organic methods and smaller yields that employed now with the fifth generation of Medici in charge of the cellars and the vines, with the wines being handcrafted by Alessandro Medici now. The vines of Salamino are set on clay based soils that allows a more deep fruit density and they are cropped at yields 30-40% lower than the strict DOC regulations permit, to ensure the utmost quality with careful selection of the grapes. It has been fun to witness these Lambrusco wines gain a noteworthy reputation and see what this new generation of winemakers can achieve, especially producers like Roberto Maestri, who’s Quarticello Frizzante being a particular favorite, Terrevive Bergianti, Cleto Chiarli, one of the standard bearers, which is easy to find, and Puianello to name a few. This very enjoyable dark purple/garnet Lambrusco, labeled now as fully certified organic, can also be enjoyed with burgers, BBQ and or Dim Sum, if you don’t have easy access to the regional foods of Emilia-Romagna!
($26 Est.) 86 Points, grapelive