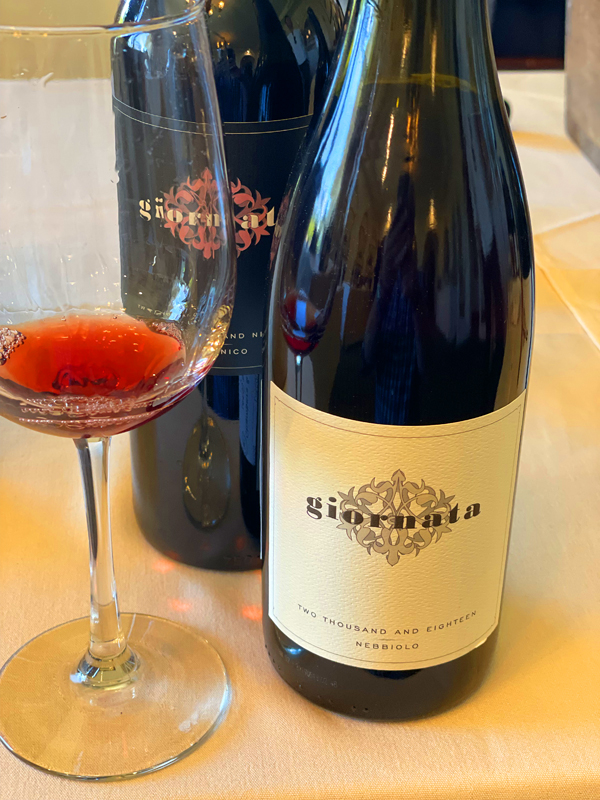 2018 Giornata, Nebbiolo, Luna Matta Vineyard, Adelaida AVA, Paso Robles.
Giornata is the creation of the husband and wife team of Brian and Stephanie Terrizzi, who have put their passion and inspiration into this label by creating beautifully made California wines that pay homage to Italian, and in case of this Nebbiolo you can really taste the Piedmonte soul here, it is a powerful and highly rewarding example. Impressive on the palate, this 2018 Luna Matta Nebbiolo shows classic varietal purity with dense California warm ripeness, which instead of being fruit forward it is rounded and puts some velvet cover to the gripping structural tannin and allows a textural pleasure to go with layers of raspberry, damson, plum, black cherry, grilled orange and earthy currant fruit and all of which is accented by truffle, black licorice, lavender spice, sandalwood and an almost minty note. This 2018 is still taut and firm, it benefits wildly by air and time in the glass where it shines with a ruby/garnet core and brickish hues on the edge, it overall is not far off its cousins from Barolo in terms of reward and style, gaining more floral and savory dimension with every sip, this is a wine you’ll want to have dinner with. I’ve really become a big fan of the Terrazzo’s wines and their latest set of offerings are the best yet, with this one being a star performer, but don’t overlook their Giornata whites and the fantastic Aglianico, which I reviewed here earlier.

Giornata, based in Paso Robles’ Tin City complex, produce a wonderful set of Italian-varietal wines from vineyards that the winery farms in Paso Robles region, mostly on the cooler west side, using traditional, old-world winemaking techniques including wines made from their signature site, the Luna Matta Vineyard, which was farmed all organic, using a mix of intriguing grapes from Fiano and Falanghina as well as Pinot Grigio in their white wines along with Nebbiolo, as seen here, and Barbera, which is deliciously fun, plus the mentioned Aglianico, which proves to faithfully capture its homeland in the glass. This 2018 Nebbiolo, as the winery notes, was carefully sorted both in the vineyard and the crushpad, seeing a lengthy maceration period, even after primary fermentation and was matured for about 24 months in oak, mostly used French oak and then over 6 months in bottle prior to release. Now sold out at the winery, this 2018, that is really coming into its own and will certainly gain more with age, might be harder to find, but well worth searching out, though I have heard great things about the 2019, which just became available and a wine I’m going to chase down soon myself. Giornata is part of a quintessential new generation of California wines that takes its inspiration from the old world, but still showing the state’s warmth of fruit and local character, influenced by the region’s chalky limestone, to become something totally unique into themselves, be sure to check out these Giornata offerings, and in particular this Nebbiolo.
($48 Est.) 93 Points, grapelive