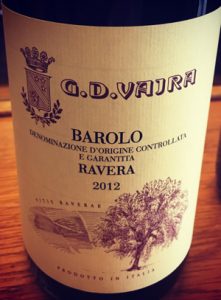 2012 G.D. Vajra, Barolo “Ravera” Piedmonte, Italy.
These 2012’s are turning out to be much better than anyone could have hoped in Barolo, in fact I think, especially as young Barolo they are as good if not more pleasing than the 2010’s! My first reaction when tasting this new, coming in November, Vajra Ravera 2012 was “Wow Giuseppe!” and after tasting through the latest releases of Vajra, I am even more impressed, the talent of Giuseppe Vajra and these vineyards are something truly magical, these are thrilling wines and true expressions of place, and in particular this glorious 2012 Ravera, this is as good as Nebbiolo gets and then some! It is worth noting that both Vajra’s top Cru Barolo, this one and his Bricco delle Viole are gorgeous wines, and in fact with a bit more time in bottle the Viole might just surpass this Ravera, it is slightly less intense at this stage, but oh my it is silky sexy! I opted to focus on Ravera, because it showed a bit more blunt force and earthy tannin behind it’s heavenly deep and layered fruit, at this point it has more gravitas and if you were comparing each to Grand Cru Burgundy, and I do for all the right reasons, you’d say Ravera was a bit more Chambertin to Bricco delle Viole’s Musigny! The 2012 G.D. Vajra Barolo Ravera Cru starts with a bang, black and red fruits, spice, earth, hints of game, ceps and mixed floral notes and minty herbs led by dried roses, distilled violet, lavender oil, tar, salted black licorice, stony mineral, porcini, new leather and cedar all playing backing parts to black cherry, damson plum, balsamic strawberry and tangy currants on the firmly controlled palate. Everything is seamless and focused, good exciting acidity, polished textures, gripping tannin and perfectly weighted and expressive fruit, detailed complexity, what an amazing Nebbiolo that is both classic and pure, but also hauntingly exotic and sensual, another stunner from Vajra, this wonderful wine looks to be a must have, make sure you are first in line to get some and be greedy! The drinking window looks to be wider and longer than 2009, 2010 and 2011, a while a masterpiece like this is great even now, you’ll be rewarded by putting some away, best from 2020 to 2035!
($75 Est.) 96+ Points, grapelive