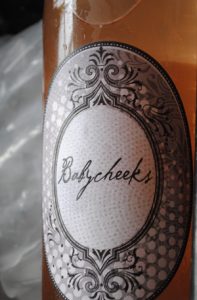 2015 Brianne Day, Rose of Tannat/Cot “Babycheeks” Applegate Valley, Oregon.
The brilliant and serious cool Brianne day Rose Babycheeks is from vineyards in southern Oregon in Applegate and is an intriguing blend of co-fermented Tannat, a French Basque grape found in southwest France and used in Irouleguy and Cot (Malbec) the grape of Cahors and found in the Loire Valley where it is known as Cot. Brianne fermented the grapes together whole cluster, racked off the lightly colored juice off into neutral wood and after fermentation it was cold stored in stainless to settle and keep vibrantly fresh. Randall Grahm of Bonny Doon also features Tannat in a pink wine, but this might be the first time I’ve heard of Malbec and Tannat together in a Rose, though I imagine it might have happened in South America? and it works well! The 2015 Babycheeks is vivid pinkish orange and has some zesty flavors a hint of tannin and drinks wonderfully with sour cherry, watermelon, crisp red citrus and light strawberry notes along with mineral tones, wet stones, wild rosemary, minty herb and rosewater. Brisk and frisky with just enough body and substance to make it textured, but with solid acidity driving the wine, superb on it’s own with savor/tanginess and great with food. Brian Day’s whole lineup is impressive, leaning to a natural side of things, her Willamette Pinots are lovely wines, though I noticed a bit of sediment and cloudiness that might challenge some people’s taste, but they are likely to improve nicely and clear up over time, they are 2014’s so I imagine with good cellaring they will be magic in a few years time, her other reds from Applegate are even better, with her 2014 Running Bare Mae’s Vineyard which is Cabernet Franc, Tannat and Cot (Malbec) being my favorite at this stage, and of course this Rose.
($26 Est.) 91 Points, grapelive