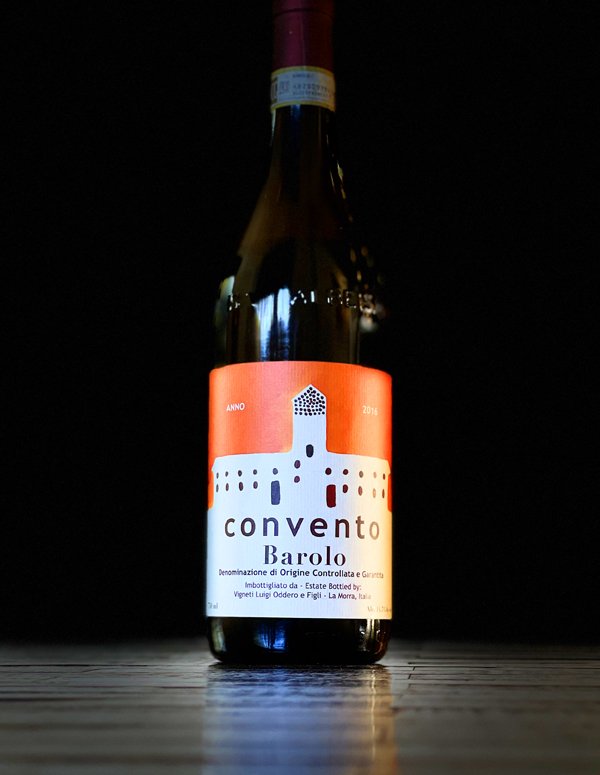 2016 Vigneti Luigi Oddero e Figli, Barolo DOCG “Convento” Piedmonte, Italy.
Part of my old world weekend of wines, the Convento Barolo from the ultra traditional producer Vignette Luigi Oddero is an austere and brickish hued, old school, savory Barolo with classic Nebbiolo flavors that are slightly obscured by the rustic tannins, this is a wine that needs food to show its best side. This is not to say it is disappointing, just style wise it doesn’t show a richness of fruit, which considering the vintage is a bit of a surprise, especially in this era of texture and concentration in the Langhe, but with a meal and air things do come together and frankly it is a nice change to feel grip and structure in a wine and this wine provides that. The medium bodied palate is earthy and stony with macerated cherry, damson plum, tart currant and balsamic dipped strawberry fruits along with hints of chalky details, saline, dried flowers, bitter herbs, tar, cedar and black licorice. This wine stays very masculine throughout, never becoming a real beauty, but to be admired for its unapologetic brisk and brusque nature, it is a dry, leathery and grippy wine that transports me back close to 30 years or so, to a time when I was first seriously exploring Barolo. The Oddero Barolo offerings come from some elite parcels in Castiglione Falletto and Serralunga d’Alba with two legendary Crus, Rocche Rivera in Scarrone as well as Vigna Rionda, one of Barolo’s upper echelon vineyards. The soils are classic limestone, sand, clay and ancient marls and all the vines see hand tending and holistic farming, which has been totally organic since the 2014 vintage and has helped bring out more energy and purity here. I bought a few bottles of this one, and I look forward to cellaring them a few more years to see how they evolve, fingers crossed for more rewards in the future, but at about 40 bucks, these are almost guilt free bargains.

It’s well noted, that the historic Oddero family, which have been active in the Barolo wine trade since the 1800s, was among the very first to bottle and market wine from this famous region in Piedmonte, and, as importer Neal Rosenthal notes, through the years the family has amassed a staggering 70 hectares of land in the Langhe, with most being Nebbiolo di Barolo, comprising over 50 hectares of prime hillside vineyards. In recent times, Luigi and his brother Giacomo co-owned the Oddero estate until 2006, but family troubles split the two and before his death Luigi set up shop in the former winery of local figurehead Luigi Parà in La Morra, with his widow Lena and children Maria and Giovanni taking the helm here. Lena hired the talented Dante Scaglioni, a native to the Langhe, who had worked for 25 years as the winemaker for the legendary Bruno Giacosa, to bring the quality up here, which by all accounts he has done. More recently, Dante has put his protégé Francesco Versio, who worked alongside him at Giacosa, into place here. Versio, himself was named Young Winemaker of the Year in Italy in 2015, is now running the cellar and has access to their vines located in La Morra, Castiglione Falletto, and Serralunga d’Alba, with smaller plantings in the Barolo commune and some in Monforte d’Alba, providing him exceptional grapes. under Dante and now Francesco’s stewardship Oddero has, as Rosenthal adds, become steadfastly organic and non flashy in the cellar. The Barolo seeing concrete tank fermentations, with lengthy almost 3 weeks of maceration, and aging, up to 36 months, in large old oak botti varying in sizes, using both Slavonian and French wood, to promote terroir nuances and transparency, which this Convento Barolo shows with the utmost clarity. I am very curious to see how Versio does here and look forward to trying the newer vintages when they become available, this is a label, I think is one to watch.
($40 Est.) 90 Points, grapelive