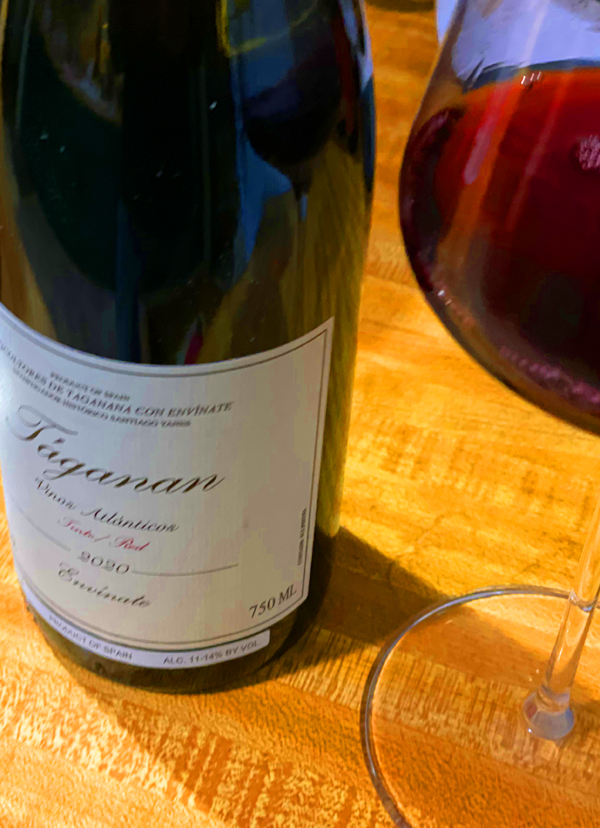 2020 Envínate, Táganan, Vinos Atlanticos, Tinto, Tenerife, Canary Islands, Spain.
The 2020 Táganan, a Listen Negro (one of the Mission Grapes) based wine grown on Tenerife’s volcanic soils, is a trilling wine with a smoky and flinty edginess and with spicy red fruits and a silky medium body that makes for a comparison with Sicily’s Nerello Mascalese (grown on Mt. Etna), which is not too hard to imagine, though the Envínate is a bit more feral and exotic. The palate has a touch of reductive funk that blows off and an array of briar laced raspberry, strawberry, tart cherry and plum fruits, along with red pepper flakes, camphor, anise, dried flowers and a subtle meaty or sanguine iron character. Best to take your time to enjoy this bottle, plenty of air, time and food make it a wonderful experience and he complexity will amaze you. To make this wine happen, as I’ve noted, Envínate, uses no chemicals in any of the vineyards, like this sites used here, which are on the volcano, with every parcel tended and picked by hand, all the grapes are foot-trodden old school style, and the wines are fermented exclusively with wild yeasts, with a varying proportion of whole grape clusters. As for aging, the Envínate wines are raised in old barrels and the absolute minimum amount of sulfur is used and only added at bottling, if needed. The results are some of the most exciting wines made in Spain, they are extraordinary and unique, as this Táganan proves, and I should mention these wines benefit from being served with a slight chill.

Envínate, as mentioned here many times, is a talented group of four friends, consisting of winemakers Roberto Santana, who is in charge here on Tenerife, Alfonso Torrente, Laura Ramos, and José Martínez. This gang of four formed back in 2005 while studying enology at the University of Miguel Hernandez in Alicante and decided that they all would make wine together, regardless of where they ended up. Then after their graduation, they formed a winemaking consultancy, which evolved into Envínate, a project, now based on Tenerife, that focuses on exploring distinctive parcels mainly in the Atlantic regions of Spain, including most famously the Ribeira Sacra in Galicia and the Canary Islands, as well as one site influenced by the Mediterranean sea in the Alicante region along with a plot in Extremadura. I’ve been following Envínate for many vintages now and every time I try their wines I find something new and exciting in them, and the current releases are thrilling, quite honestly there is nothing quite like them! This vintage of light ruby hued Táganan, which means slope in the local dialect, was made from mainly Listen Negro, but also saw a good bit of Negramoll, as well as small amounts of rarities like Mulata, Listan Gacho and Malvasia Rosada, with all parcels fermented separately in open top vats, about 30 to 50% de-stemmed, with a two-week maceration before the wines are blended and aged for about a year on the lees in neutral barriques without racking and bottled unfined and unfiltered. This wine is not made every vintage, so it is hard to find, but well worth it!
($48-54 Est.) 93 Points, grapelive