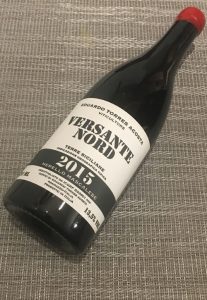 2015 Eduardo Torres Acosta, Nerello Mascalese “Versante Nord” IGT Terre Siciliane, Italy.
This is the second vintage I’ve had of Eduardo Torres Acosta, the Canary Islands native and now winemaker at top Etna estate Passopisciaro, who is crafting a tiny production Nerello Mascalese from parcels of older vines on the north slope of Mount Etna, averaging 40-50 years old on the volcanic soils that give these wines their pure terroir driven character. The 2015 Versante Nord, made up of at least 80% Nerello Mascalese, a light to medium bodied grape that is often called the “volcano Burgundy” for it’s transparency and lighter ruby hue, along with other various local varietals, including a touch of Carricante (the white grape of Etna) is a earthy treat with just enough reductive funk and liquid shale aromas to make you balk a bit before the beautiful and delicate palate seduces you with silken tannins and layers of red fruits, spices, flinty stones, saline, licorice, kirsch and sweet new leather. Gaining exotic elements and density with air, which also allows the pungent start to blow off in this natural inspired red that flows with briar laced plum, cherry, raspberry and blood orange fruits, Eduardo Torres Acosta ferments with 10% whole cluster in cement vats using native yeasts with a two week on the skins maceration and then raises it in neutral large Slavonian barrel/cask for 16 months, still youthful now this should gain floral perfume and even more textural grace over the next 2 or 3 years, I can imagine this aging well. The Tenerife native has really taken to Sicily, and after working with Arianna Occhipinti, he is showing lots of potential with his Versante Nord Nerello Mascalese, it’s not a mainstream wine, but it certainly has intriguing charms and it really has grown on me, best to decant and or age it a bit longer, best from 2018 to 2024.
($30 Est.) 92 Points, grapelive