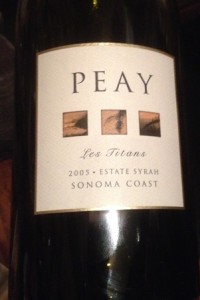 2005 Peay, Syrah, Les Titans, Sonoma Coast.
The 2005 Peay Estate Syrah Les Titans is a very pretty mature wine at this stage and it is drinking beautifully at the moment with peak performance happening with a mix of dried flowers, grilled herbs and truffle leading the way with sweet and savory tones to compliment it’s northern Rhone character and earthy fruit. Vanessa, Nick and Andy Peay turn out some of the most compelling extreme Sonoma Coast wines out there with Pinot Noir that joins an elite group such as Cobb, Hirsch, Littorai and others, along with a wonderful Chardonnay, a trademark of Vanessa’s time at Peter Michael, but it is there intense cool climate Syrah that always thrills me the most, so it was great to taste one of their early efforts and re-enforce my high opinion of this remarkable wine. While the current releases of Les Titans show massive improvement as the vines have gotten some age, I was very enthusiastic about where this 2005 was, it is a tasty Syrah that is fully evolved and very expressive. The nose keeps getting better in the glass with air, an array of flavors entertains of the palate and the finish has superb length, the tannins have melted away into the background with silky grace and it still has enough acidity to hold the fruit together with blueberry compote, fig paste, boysenberry, creme de cassis and stewed plums forming a core along with a trace of camphor, minty licorice, wild mushroom, dusty stones, olive tapenade, cedar wood notes and lingering wilted violets and baking spice. This medium bodied Syrah seems at it’s best right now, though could go another couple of cellars, so I wouldd suggest drinking soon before it fades, this is stylish stuff that proves California Syrah is the real deal!Thanks to my friend Fred Daniels that pulled this from his cellar, very kind of him to share, he bought this new from Peay on release. Be sure to look for the 2012 and 2013 vintages as well as 2007, 2009 and 2010 if you can find them!
($45-60 Est.) 92+ Points, grapelive