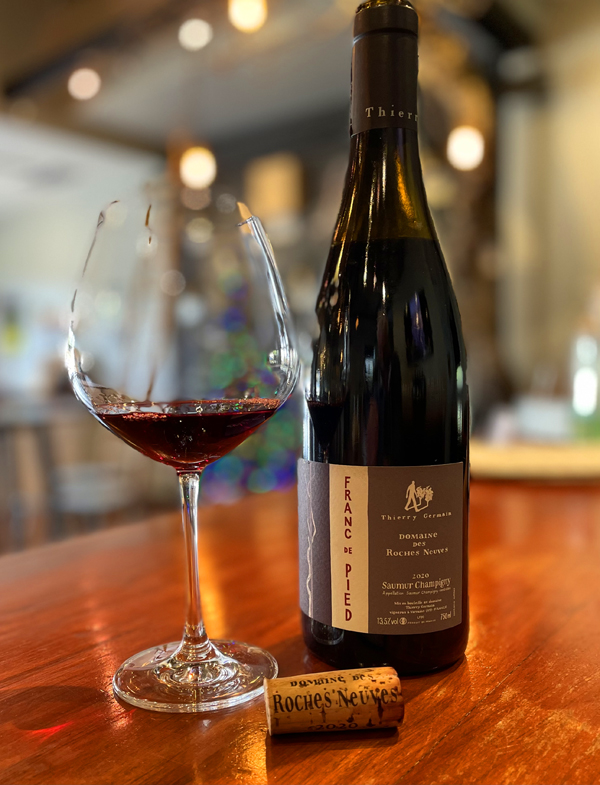 2020 Thierry Germain – Domaine des Roches Neuves, Saumur Champigny “Franc de Pied” Loire Valley, France.
As mentioned many times here, I am a huge fan, as are thousands of enthusiasts, of the Loire Valley’s Thierry Germain wines, and his outstanding collection of Saumur-Champigny Rouge bottlings, especially this rare cuvée Franc de Pied, which is drinking like a Grand Cru Burgundy with gorgeous violet aromas and opulent layers of red fruits, spice, mineral and seductive earthy notes. This 2020 is pure class and while absolutely stunning now, it will continue to reward as it gracefully ages, I think it will still be going strong two decades from now, such is the structure and depth here with expressive red currant, raspberry, plum and black cherry fruits, along with pretty floral tones, chalky stones, cinnamon spice, cedar and anise providing fine accents to the remarkably pure and elegant Cabernet Franc. Thierry Germain, a Bordeaux native relocated to the Loire about 30 years ago and soon fell under the spell of his spiritual father, the legendary Charly Foucault of Clos Rougeard, who influenced Germain’s wines and vines, converting his entire domaine, which he founded in 1992, to biodynamic viticulture, helping him to become one of the region’s super stars. The Saumur-Champigny “Franc de Pied” comes from special own rooted vines set on sand and limestone and is uniquely sees a 100% whole cluster fermentation in old Foudres with once a day punch downs, this lasts almost two weeks and then the Cab Franc is pressed to large 1200L foudre, where it was aged for 12 months. This deep garnet/magenta whole cluster Franc de Pied is really an exciting and naturally styled version of Saumur Champigny best enjoyed with Loire geeks and a meal.

Again, as mentioned, Kermit Lynch, the famous importer, says that Thierry Germain’s Domaine Roches Neuves has vines, that are old, wise, and vibrantly healthy, thanks to Thierry’s biodynamic viticulture and fantastic attention to detail in the vineyards and in the cellar. Lynch goes on, adding that, Roches Neuves, whose vineyards are planted in the Saumur (Blanc) and Saumur-Champigny (Rouge) appellations, has rightfully become one of the greatest examples of high achievement in biodynamic vine growing in France. This puts him up there with the greats, that Kermit also imports, like Abbatucci in Corsica, Ganevat in the Jura and Domaine Ostertag in Alsace. Thierry Germain’s total dedication to site specific wines, some of the most distinctive Loire wines are hand-crafted from Cabernet Franc and Chenin Blanc grapes, which Kermit calls his “parcellaires,” they are very noteworthy offerings, some of the most exciting wines in the Loire Valley today, all of which I totally agree with. I’ve enjoyed many vintages of Thierry Germain’s wines, but as noted, these 2020s are spectacular, especially this Franc de Pied, which actually comes from some of the youngest vines, as well as his Saumur-Champigny “Mémoires”, that I reviewed here recently. The entry level bottlings which see almost no oak or aging time are lovely wines as well and are great ways to start exploring this awesome producer, I always love pulling the cork on the fresh vintage of Thierry Germain’s blue label Domaine des Roches Neuves, which sells for about $25 and is an excellent value, while these upper end efforts are more special occasion wines. Germain also does an exceptionally rare no sulphur Amphora macerated and fermented 100% Cabernet Franc (Saumur Champigny) called the “Outre Terre” which I am very intrigued by and hope to try soon, it is definitely on my watch list!
($59 Est.) 94 Points, grapelive