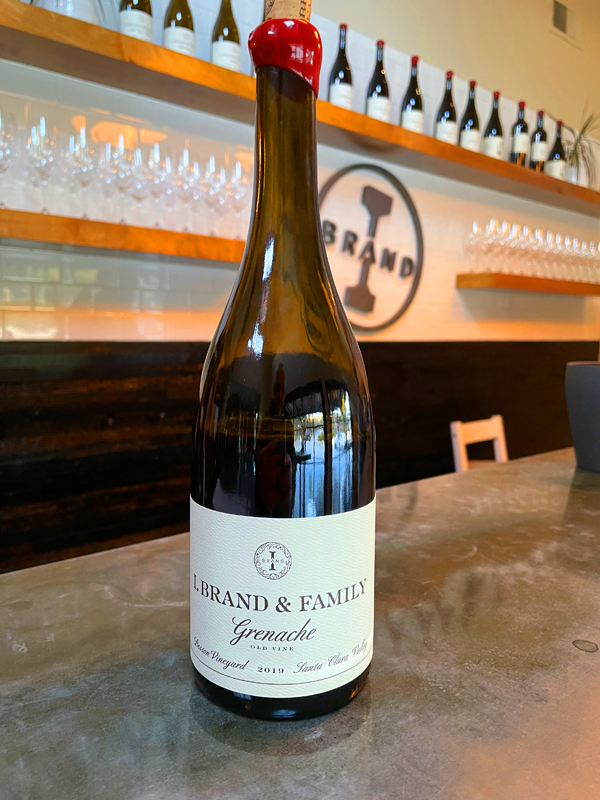 2019 I. Brand & Family Winery, Old Vine Grenache, Besson Vineyard, Santa Clara Valley.
This Besson Old Vine Grenache is one of Ian’s signature offerings and the 2019 vintage is one of the best yet, already a very serious effort in the glass with depth, spice and texture galore with layers of red berry, Strawberry and pomegranate fruits, along with a light herbal (stems) note, chalky stones, sandalwood, black licorice, pepper and lingering kirsch. Without question, after a few samples of this 2019, the I. Brand & Family Old Vine Besson Grenache, I have to put this wine into my top ten wines of the year and it is one of the top California Grenache bottlings currently available, especially for the price, it is as good as it gets and I’d put it up there pleasure wise with some of my favorite old world Grenache based wines, reminding me a lot of Dani Landi’s Sierra de Gredos Garnacha efforts. Ian does quite a few Grenache bottlings, all of which are tasty, from his La Marea Grenache, a blend of central coast sites to his Chalone AVA Brousseau Grenache, also under his I. Brand & Family label, like this one, but in this 2019 vintage the historic Besson Vineyard is my clear favorite. This dark ruby/garnet Old Vine Grenache is absolutely seductive now and there should no remorse in opening it now for guilty pleasure, but I can see it aging well and I will be putting a few bottles away, as I’ve done with Brand’s Mourvedre bottlings, that are fantastically structured wines that gain an extra dimension with a few years of age on them.

The Old Vine Grenache comes from the historic Besson Vineyard near the Hecker Pass and the town of Gilroy, which is about a hundred and twelve years old now, and provides some of the best Grenache grapes in California. The Besson Vineyard, planted on its own roots back in around 1910, is finally getting the acclaim and attention it deserves, it has been the source of some outstanding wines, it transmits transparent flavors and is a unique terroir. In recent times it has had lovingly maintained vines with a focus on quality fruit and natural methods has been sustainably dry farmed ever since it was originally planted. This site, as I have noted in prior reviews of this and other wines from this vineyard, first came to the wine world’s attention when California icon Randall Grahm used these grapes in his Clos de Gilroy Grenache, and more recently being used by Angela Osborne of Tribute to Grace, the Kiwi who is one of California’s top Grenache producers. Plus there’s a great Sandlands Besson out there, as well as one of Brand’s friends John Locke of Birichino, another label that is putting out a beautiful version of this Besson Vineyard. Ian’s example, with the little extra aging is turning on the charm and its whole bunches, textural density and old world character makes this vintage very seductive, as mentioned above, indeed, and it should only get better over the next 3 to 5 years and age another decade or more! Ian has a lot of hits in the lineup right now, this one included, along with his opulent 2019 Massa Cabernet Sauvignon, the exceptional 2020 Bates Cabernet Sauvignon and his crisply detailed Arneis, to name just a few.
($42 Est.) 95 Points, grapelive