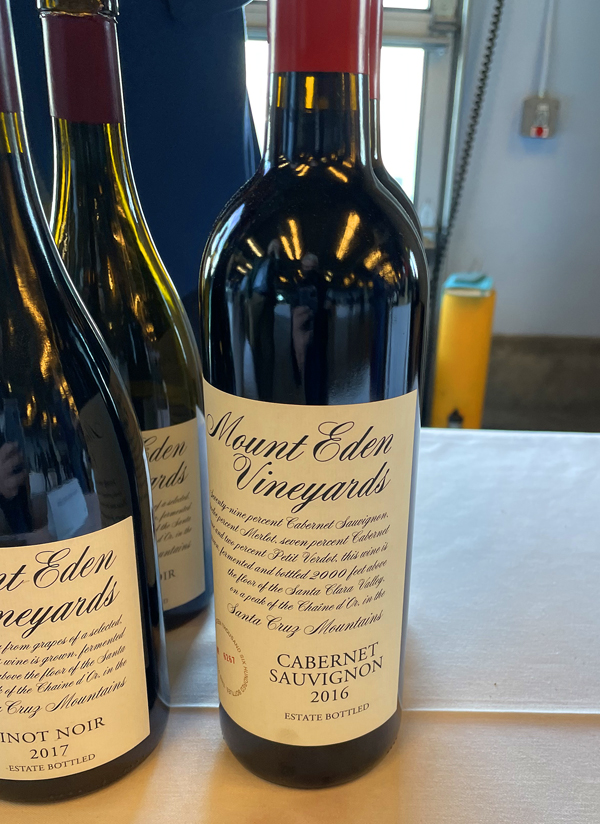 2016 Mount Eden Vineyards, Cabernet Sauvignon, Estate, Santa Cruz Mountains.
The 2016 Santa Cruz Mountains Estate Cabernet Sauvignon from Mount Eden Vineyards is a stunning bottle and has the stuffing to age decades, I was thrilled by what I found in these new releases from Jeffery Patterson, his son Reid and his team, especially the top estate offerings like this Cabernet with its inky dark color, full bodied density and exceptional length, this has to be one of my favorite vintages, even though I said that about the 2014. The 2016 no doubt has the edge on concentration, but the balance is lovely and the ripe tannins melt in your mouth with opulence, even though they are still youthfully firm, this is a California Cabernet for Bordeaux lovers, much the same way as neighbor Ridge Monte Bello is. This 2016 leads with rich currant, blackberry, plum and black cherry fruits, along with hints of pencil lead, anise, creme de cassis, smoky sandalwood and savory tobacco leaf and age notes. The Soils at Mountain Eden are very thin with a dominant base of Franciscan shales, which are found in these coastal range vineyards, which suits these vines and adds to the concentration of flavors. The climate is cool, with the Pacific Ocean near by, especially for Cabernet, and influenced by the vineyard’s altitude and its proximity to San Francisco bay as well. The vines are trellised in a modern fashion, which promotes even ripening, with the long growing season adding refined tannins and complexity, along with nice natural acidity. The Mount Eden Cabernet Sauvignon was fermented in small 1,000-gallon stainless steel tanks, with Patterson doing punch downs manually and macerated it, as he notes, for about ten days after fermentation completed, then was transferred into new Bordelaise chateau (French oak) barrels where aged twenty-two months in the cellar.

Mount Eden’s estate as started by Martin Ray and now run by the Patterson family sites on a rugged mountaintop in the Santa Cruz Mountains with 40 acres of low-yielding Chardonnay, Pinot Noir, Cabernet Sauvignon, plus tiny amounts of Merlot and Cabernet Franc vines that go into the Cabernet Sauvignon bottlings. Mount Eden Vineyards is one of the longest running family estates in California that is maybe most famously known for Pinot Noir and Chardonnay, but has always done a fantastic Cabernet Sauvignon. Interesting, separate from the relationship with Paul Masson, the heritage of Mount Eden Cabernet Sauvignon dates back to the 1890s, when the famed viticulturist Emmett Rixford of Woodside, California, obtained selected cuttings from Chateau Margaux in Bordeaux and it’s from Rixford’s famous La Questa Vineyard with these selections that were used to plant parcels at Mount Eden. This historic winery is perched up at 2000 feet, with an eastern exposure above Saratoga and overlooking the Silicon Valley in the Santa Cruz Mountain Appellation, just about 50 miles south of San Francisco. Mount Eden was founded in 1945 and was one of the original “boutique” California wineries by famed vintner Martin Ray, who as mentioned, focused on small lots of Pinot Noir, Chardonnay and Cabernet Sauvignon. Since 1981 Jeffrey Patterson, the current owner along with his wife Ellie, has guided the winemaking and grape growing at Mount Eden, taking it to the very top in terms of quality and distinction, making it an iconic California winery. Mount Eden is still turning out some of the best wines in the state, as this powerful, complex and acacia flower scented 2016 Estate Cabernet proves. Tasting at the 2022 Slow Wine tasting in San Francisco, normally an Italian themed affair, but the American wineries that were in attendance really put on a phenomenal display of class, with Mount Eden being one of the best on the day.
($90 Est.) 97 Points, grapelive