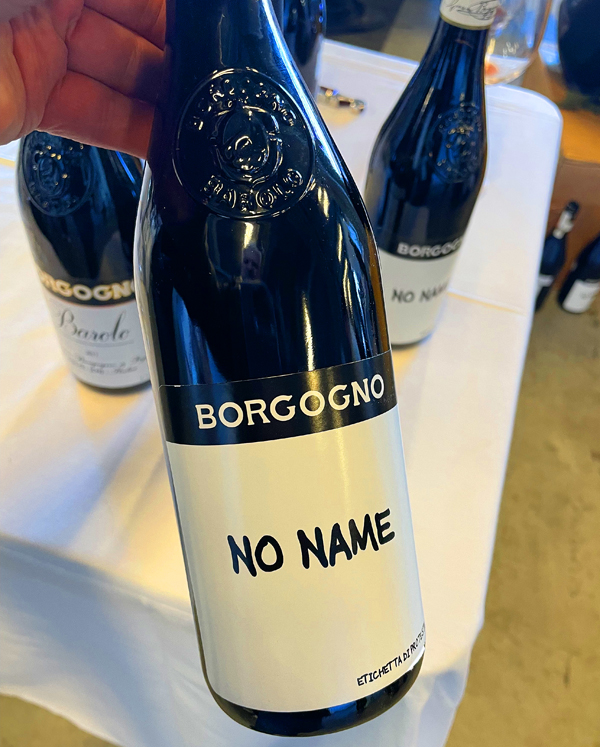 2018 Borgogno, No Name, Langhe Nebbiolo DOC, Piedmonte, Italy.
The impeccable and finely detailed 2018 Borgogno No Name Langhe Nebbiolo, which really is a de-classified Barolo that saw the same winemaking and treatment as the rest of the Barolo wines, with a rumor that this wine was from an identical batch of Nebbiolo that was no certified and came from a large cask that was divided into two lots, one got approved as Barolo and this one didn’t, but whatever the truth is, this is a delicious value with classic terroir character. The nose is a mix of dried roses and earth that leads to a bright and youthfully tannic medium to full bodied palate of brandied cherries, damson plums and red currant fruit, along with savory/meaty elements, black licorice, mint, cedar and orange rind. This wine is much more serious than the No Name would have you believe and it has potential to reward those that tuck a few bottles away, its structure and core of fruit density are compelling indicators of future rewards, while the price and overall grace allow for guiltless pleasures in the short term as well. This garnet/brick red hued wine has made me a fan, especially after getting to try it over the course of a few hours, it gains a sense of pedigree and poise with air, adding more dimension, aromatic excitement and elegance, it also whets your desire for Borgogno’s cru bottlings, in particular their gorgeous Cannubi Barolo! The No Name offers remarkable drinking at a fair price, giving a vinous and sensual Nebbiolo experience, with this 2018 proving very nice and will be an eager companion to robust and hearty meals, with dishes like quail, wild mushrooms and roasts being good pairings, as well as more simple things like pasta or risotto working well too.

The historic Borgogno & Figli label and winery has been restored to the highest level of respect and quality under the ownership of Andrea Farinetti, who has a string of intriguing wineries and projects throughout Italy and who is dedicated to native varietals and traditions within the regions. The No Name Langhe Nebbiolo comes from vineyards located in the Langhe area in the villages around Barolo set on the classic Marl limestone and clay soils with all the estates vines being certified organic and is crafted with the idea of being a more early drinking example of Nebbiolo, but with real Barolo presence in the glass. Borgogno, as mentioned in my prior reviews, is one of Piedmonte’s oldest and most revered Barolo properties, founded back in 1761, employs traditional winemaking, and the No Name Langhe Nebbiolo shares in this, getting the same fermentation and long maceration of about 2 weeks as the Barolos, The primary fermentation, with all de-stemmed grapes, is done in temperature controlled tanks, with what the winery says was a submerged cap maceration with a variable duration between 10 and 20 days, to allow the gentle extraction of structure and depth of flavors. After going dry the No Name juice gets the Barolo like treatment of being aged in large Slovenian oak botti for an extended period of about 24 months before bottling. Again as noted before, Borgogno has some incredible plots in some of Barolo’s most admired Crus including Liste, Fossati and the mentioned Cannubi, one of the world’s greatest vineyards, so for Nebbiolo, this is a must try winery. Tasted at the San Francisco stop of the 2022 Slow Wine tour, Borgogno, again impressed with their trio of Nebbiolo wines they were pouring, with their 2015, 2017 and 2018 all showing purity and class.
($45 Est.) 92 Points, grapelive