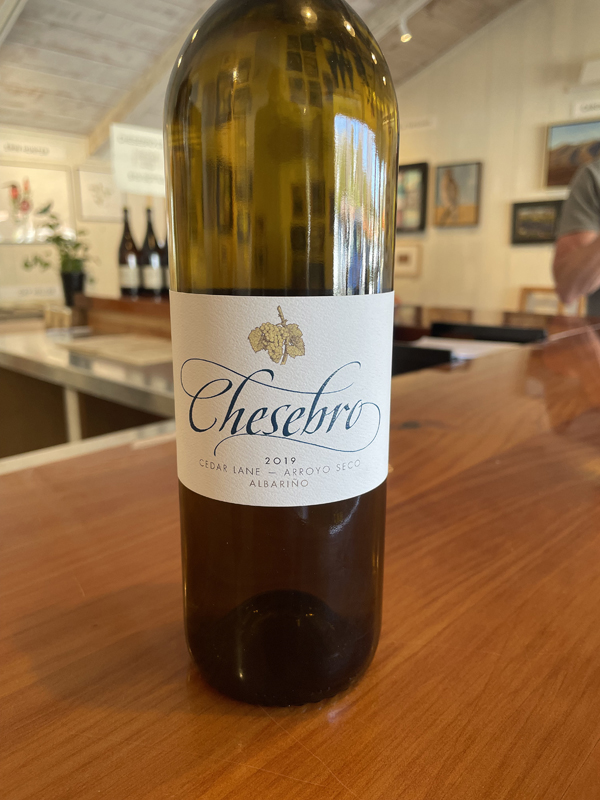 2019 Chesebro, Albarino, Cedar Lane Vineyard, Arroyo Seco AVA, Monterey County.
Mark Chesebro’s crisp and bone dry Albarino is a delightfully fresh and pure version that goes great with everything from oysters to lemon chicken dishes and it highlights just how good this varietal is when grown in a coastal climate and the saline rich stony alluvial soils here in Arroyo Seco. This 2019 is maturing well and has a nice background textural quality while still being racy and refreshing on the lighter framed palate with vibrant citrus, tart cider apple, peach and melon fruits leading the way in a zingy mineral driven wine that is lightly floral, salty and has a faint touch of straw and almond nuttiness. The 2019 is pretty sold out out, but the 2021 is out now and I look forward to trying it soon, but the vintages are likely not all that different, in fact I think the long cool growing season, while similar, should enhance the zesty style Chesebro goes for, making it a wine that looks to perk up those warms days ahead. Chesebro sells most of the grapes he grows, supplying some of the fine artisan brands that are better known, but these small lot wines under his own label are solid authentic wines without pretense, I highly recommend discovering the range of wines here, especially this Albarino and the Vermentino, a favorite of mine, made in the Favorita (Piedmonte) style, more zippy and lighter than Sardinian, Tuscan or Corsician versions. Chesebro is mainly known for the Rhone inspired reds as well as Sauvignon Blanc, but he also does some Bordeaux varietals, Gamay and Pinot Noir, all of which lean a more old world and less oaky style.

Albarino, a Spanish and Portuguese grape, most in the Rias Baixas region of Galicia, came to California in the late 1990s and has been a huge success throughout the cooler zones of the state. The first California Albarino was made by Michael Heavens (now of Cave Dog wines) from his small parcel of vines in Carneros and it was almost revolutionary, given us a great alternative to grassy Sauvignon and overly butter Chardonnay that was popular at the time. The grape made its way here to the central coast in the mid 2000s and has become a star in the Monterey region with some exciting versions really taking off in recent years, in particular the La Marea line by Ian Brand, which are delicious and includes a version with some skin contact, as well as Russell Joyce’s Joyce Wine Co Albarino that has a huge following too. Mark Chesebro, who was a winemaker at Bernardus, went 100% stainless steel with his Albarino and focuses on purity and transparency here, preserving all the intensity of the grapes natural acidity in the finished wine. As a fan of Rias Baixas wines, especially those of Nanclares and the like, this Chesebro version really appeals. Chesebro, who studied chemistry and biology at UC Riverside and UC Santa Cruz, before going back to school at UC Davis to study enology and viticulture with an eye toward creating a sustainable farm and vineyard, as he puts it, to live off the land, based on a suggestion of some Europeans he met while at Davis. He and his family presently on a ranch in Carmel Valley, where they grow grapes, apples, near to the vines in Arroyo Seco, which he farms. It’s a great time to discover these Chesebro wines and the Albarino is tasty way to start.
($24 Est.) 90 Points, grapelive