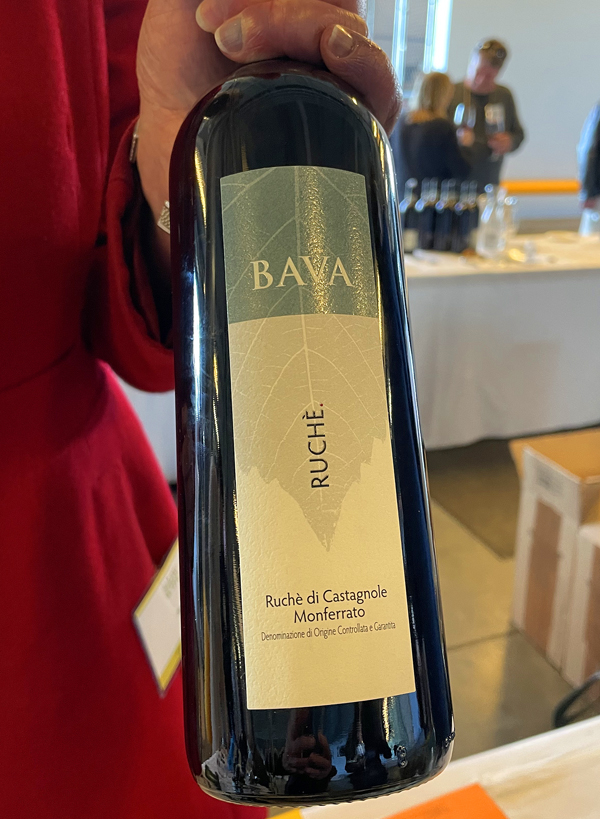 2019 Bava, Ruchè di Castagnole Monferrato DOCG, Piedmonte, Italy.
The heavenly perfumed, but dry Ruchè di Castagnole Monferrato by Bave is cherry and plum fruit wine with a liquid rose petal nose, a sultry earthiness and a lightly tannic medium bodied palate. This is pretty stuff and distinctly Piedmonte in the glass with some fine almost Nebbiolo like details, a ruby/garnet color and brambly spicy, with hints of candied orange, minty herbs and with a chalky mineral element. All of which making this an exciting example of this rare Langhe red grape that has made a big come back in recent years largely due to the quality of the Bava and Montalbera wineries versions. Montalbera’s Ruchè, which I love, is more high profile and has more availability stateside and maybe setting the standard for quality, at least in what I’ve tasted so far, so it was nice to see Bava’s version right up there.This varietal is highly unusual with incredible aromatic character, Ruchè is as the Bvga family asserts, simply original and unique, once only found in sweet wines it has found a new life and following as a fragrant dry wine, with sweet and light tannins and moderate acidity and a good alcohol content. Ruchè can only be produced in seven municipalities of Monferrato, with Castagnole Monferrato being the highest regarded. Castagnole Monferrato, became a DOC in 1987, then a full DOCG, the more prestigious classification in 2010 and locals claim Ruchè as their own and it is considered the legacy wine of the Parish’s Priest, claiming that Father Cauda was in fact the creator of the modern Ruchè, though the grape has been grown in the region for hundreds of years. Ruchè is a mysterious grape once believed to have originated in the hills northeast of the town of Asti and I haven’t encountered too many notable versions, as noted, here in the states, especially as it is made in very low numbers and not imported often, though when done right it can be exceptional and very memorable, as Bava’s 2019 is.

The history of the Bava Family also goes back six generations, over 100 harvests, and starts in the village Cocconato, near vineyards that dominated by the Romanesque church of La Pieve and the Bava’s most cherished Barbera vines. They are know equality for whites and reds, but I really only tried a collection of the red wines at San Francisco’s Slow Wine 2022 tasting, with this Ruchè and their Nizza DOCG Barbera being the two standouts. This all stainless Ruchè di Castagnole Monferrato was crafted to highlight the gorgeous aromatics and purity of this grape, making it bright and crisp, allowing its true personality to shine through without the use of wood. The Ruchè di Castagnole Monferrato terroir is similar to Barolo and is up at about 200 meters with classic limestone soils with some hardened clay, sand and mineral sediments all of which add to the complexity and balance here. The Bava’s say, as a grape with primary aromas and few tannins, Ruchè does not need a long period maceration and finishes fermentation quite quickly, and they try to preserve the grape’s natural fragrance and avoid aging in barrels, preferring to bottle early as well in the following Spring. The exact origins of Ruchè are still unknown with ampelographers holding different theories, with two most prominent theories, one being an indigenous Langhe grape native to the Piedmont region or that it originated in Burgundy and was brought to Piedmont sometime in the 18th century, though that idea seems a touch far fetched as I have yet to see a grape similar in character in that part of France. For most of its history in Piedmont, the grape has been cultivated in relative obscurity, but now the secret is out and there plenty of excitement for it at home and even abroad, like here in California, where excitingly, ex Bonny Doon founder Randall Grahm is planting some Ruchè for his Popelouchum estate in San Juan Bautista. Imported now by Siena Imports, Bava should get easier to find, look for this Ruchè, and get to know this grape, it is well worth your time.
($25 Est.) 91 Points, grapelive