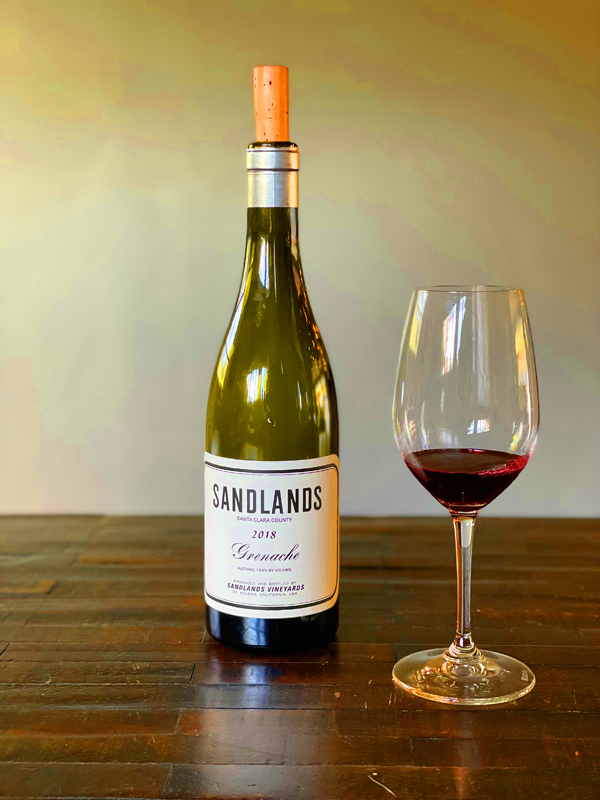 2018 Sandlands, Grenache, Besson Vineyard, Santa Clara County.
Tegan Passalacqua’s Sandlands beautifully detailed and aromatic Old Vine Grenache comes from the historic Besson Vineyard, near the Hecker Pass and the town of Gilroy, which is now way past one hundred years old and produces fantastically pure and concentrated wines, as this one shows, but also in a vintage like 2018 it gives deep flavors and low natural alcohol, making it a unique expression of this Rhone varietal, most famous in Chateauneuf du Pape, but is also the grape of Sardinian Cannonau and the fine high elevation Garnacha of Spain’s Sierra de Gredos. The 2018 Sandlands Grenache is sumptuous from the start and feels heavenly vinous on the palate while displaying a cool and crisply detailed personality that gets more and more expressive as it opens up on the medium to full bodied palate with black raspberry, candied cherry, plum and pomegranate fruits along with tangy herbs, earthy pine, subtle peppery spices, cut flowers, licorice and soft wood notes. Only a few barrels were made of this nicely structured and smooth Grenache that comes in at just 13.4% natural alcohol and as with all of Tegan’s wines it was indigenous yeast fermented with some whole bunches and aged in well used barrels, mostly if not entirely old French oak. Passalacqua, who is the head winemaker and vineyard manager for Turley Wine Cellars, makes some of the most authentic and soulful expressions of non mainstream California wines out there, and they are all exceptional values. I highly recommend joining this Sandlands mailing list, none of his offerings are to be missed, especially the Cinsault, Carignane, Trousseau, Mission, Mataro (Mourvedre) and this Grenache, as well as the Soberanes Syrah and his signature Zinfandel from his family’s Kirschenmann Vineyard in Lodi.

The Besson Vineyard is owned and farmed by third generation farmer George Besson Jr, was first planted to the Mission grape in the 1800s, then saw its Grenache planted on its own roots back in around 1910, is finally getting the acclaim and attention it deserves, it has been the source of some outstanding wines, it transmits transparent flavors and is a unique terroir. Most of this vineyard, which is organic, is set on gravelly soils with clay and loam and is a stones throw from the border with the Santa Cruz Mountains AVA and sees a nice cooling influence from the Pacific and gets some marine layer fog at night early mornings. In recent times it has had lovingly maintained vines with a focus on quality fruit and natural methods has been sustainably dry farmed ever since it was originally planted. This site, as I have noted in prior reviews of this and other wines from this vineyard, first came to the wine world’s attention when California icon Randall Grahm used these grapes in his Clos de Gilroy Grenache. Now this vineyard is well represented by Ian Brand, with his signature I. Brand & Family version being a huge hit and more recently Besson is being used by Angela Osborne of Tribute to Grace, the Kiwi who is one of California’s top Grenache producers, as well as one of Brand’s friends John Locke of Birichino, another label that is putting out a beautiful version of this Besson Vineyard. This dark magenta/ruby colored Sandlands Grenache is right up there with the best wines sourced from this site and this 2018 is drinking outstandingly well right now and makes me wish I had a bunch more of this limited bottling. I typically try to give these Sandlands wines a bit of cellar time before opening them, but I just had a feeling this 2018 was going to be a thrilling wine on the night and I was right, it is really hitting its stride and should continue to do so for another 5 to 7 years easy.
($28 Est.) 93 Points, grapelive