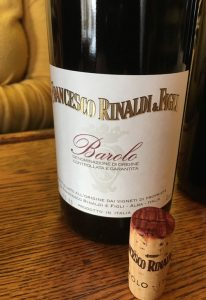 2012 Francesco Rinaldi & Figli, Barolo, Piedmonte, Italy.
The Rinaldi normale Barolo 2012 is a stylish and pure Nebbiolo of fine detail and character that reflects both the house and terroir, it’s dusty/chalky Alba markers showing through and with lively vintage character, this is a very solid effort. Having tasted with Paulo Rinaldi and her winemaker Fabio Allessandria, you get the feeling they are trying to build up the quality and give the wines a bit more substance, while retaining the traditional ways, and after tasting a mini vertical of 2010, 2011 and 2012 you can see some of the effect, even though 2010 was a fantastic vintage, especially their Cannubi Cru, which was their best effort to date in my opinion, the 2012’s look set to reach the next next level with overall appeal and depth, I was really impressed with the basic Barolo here, it is a little beauty. The 2012 Barolo starts with classic aromas of damp earth, minty herb, red berry and dried roses with vivid ruby/orange hue in the glass with a dark garnet core, it’s a medium/full bodied wine with a satiny backbone, juicy acidity and a mix of black cherry, plum and strawberry fruits along with salted black licorice, tar, blood orange marmalade and hints of cedar and guava. The texture is bright, but smooth for a young wine, making it attractive and pleasing to drink now even, though it should gain depth and complexity with another year or so in bottle. What is compelling about these 2012’s across the board is that these are Nebbiolo offerings that are forward and expressive, but still have plenty of vigor to age, unlike the 2010’s which really should be cellared another 5 to 10 years. The 2012 Francesco Rinaldi & Figli regular Barolo is a good drinking wine with enough going to to joyous entertain, especially with robust and rustic cuisine, best from 2018 to 2022.
($49 Est.) 92 Points, grapelive