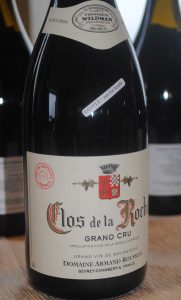 2015 Domaine Armand Rousseau, Clos de la Roche, Grand Cru Red Burgundy, France.
This 2015 Clos de la Roche from Rousseau might even be better than the 2010, a wine I thought was near perfection, it was by far the best 2015 Red Burgundy sample on display at Wildman’s epic 2015 preview tasting in San Francisco (February 6, 2017) and was my personal favorite. And not that I was in any doubt about it, Master Somms Fred Dame and Jim Rollston without hesitation or prompting agreed, it was a spectacular wine, and will be one of the most collectable trophies of the vintage. While the Armand Rousseau flagship Chambertin didn’t show much, in fact it was rather primal/dull, the 2015 Clos de la Roche was vibrantly expressive, concentrated and heavenly long with appealing silken red and black fruits, beautiful inner perfume and vitality, of course in the short pour it was hard to get it all, and for the fact it was a barrel sample, there will be some variation from the finished bottling, but don’t let that give you pause, this is one of the greats and looks set to be a classic Grand Cru. Clos de la Roche in the northern part of Morey-St.-Denis is one of the greatest Burgundy vineyards, I in truth believe it it to be the best of all, excepting of course Romanee-Conti and La Tache, though in most vintages I’ve tasted the Clos de la Roche is prettier, sexier and more delicate than even those, I would also favor it just above Musigny and Bonnes Mares, though it would be seriously close depending on year and producer, it is a special terroir and Rousseau’s is gorgeous. Tiny crops throughout Burgundy in 2015, a warm vintage, means prices will be exceptionally high, nose bleed stuff, though this one was always going to be out of sight for most wine lovers, and I would not normally write about such a rarity, but it certainly is worth every penny for the magic it will bring. The 2015 Domaine Armand Rousseau Clos de la Roche starts with smoky violets, rose petal, blackberry, cherry and wild plum, slight mineral and earth along with youthful acidity, fine satiny tannins and lingering strawberry/blueberry. On the finish you pick up a hint of oak, stones and sweet kirsch, this is ravishing Pinot Noir, beautiful, exotic and detailed, rather delicate at this stage, it will blossom into a blockbuster with age, there is nothing to fault here, I hope and dream I get a chance to re-visit this masterpiece in say 12 to 18 years somehow, somewhere, wow.
($350-450 Est. Barrel Sample) 97-98 Points, grapelive