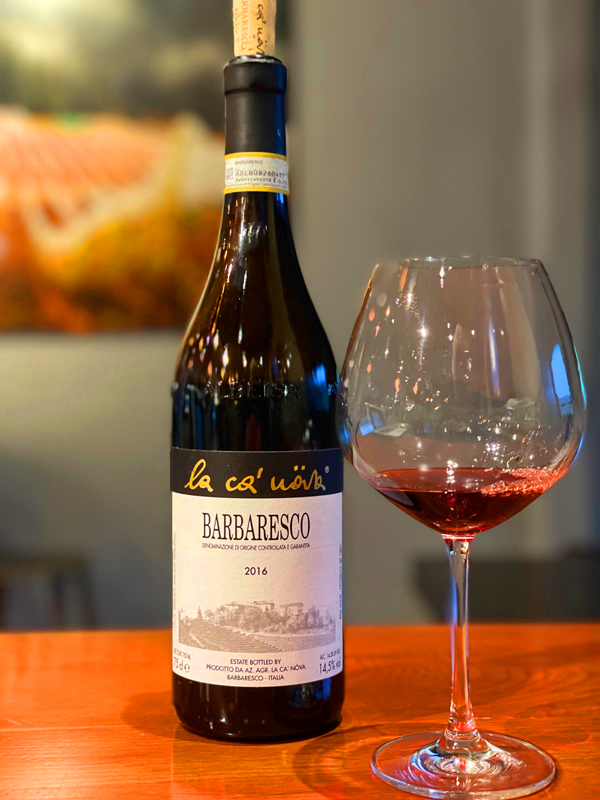 2016 La Ca’ Növa, Barbaresco DOCG, Piedmonte, Italy.
The 2016 normal Barbaresco from La Ca’ Növa is absolutely beautiful and everything you love about this terroir and Nebbiolo with pure floral aromatics and varietal flavors showing elegant layers of black cherry, damson plum, spiced raspberry and red currant fruits along with minty herbs, dried lavender, light earthy notes, a touch of cedar and well integrated tannic structural grip. I love everything I’ve tried from Marco and Ivan Rocca and his La Ca’ Növa winery in Barbaresco, especially this classic bottling and the 2016 vintage, one of my favorites in the last ten years, this are rustic and pure wines that really speak of place with this Barbaresco delivering everything a true Nebbiolo should do, but with subtly and without pretense. As noted before, Rocca is old school and shy by nature, he is not into modern technology and his wines are made in rustic fashion but with extreme care and love. He does his fermentation(s) without temperature control or with stainless tanks, he only employs indigenous yeasts and everything is done by hand using open barrels, as was done in older and simpler times. The maceration, interestingly is done with a large wooden spoon, which Marco uses to stir the musts, which he notes, is very difficult and time consuming work, but it worth it, as it helps extract a much richer color as well as more polyphenols. Interesting too, the Roccas, who were growers who sold grapes to others (including Gaja) until they began bottling under their own label, age their Barbaresco in Austrian, rather than Slavonian oak.

As mentioned in my prior reviews, Marco Rocca’s La Ca’ Növa winery is located just outside of the historic village of Barbaresco and is a small winery that produces traditional styled wines that way over deliver for the price, especially this basic Barbaresco and the famed Montestefano cru, which I reviewed earlier. Marco’s main passion is his Nebbiolo parcels and his trio of Barbaresco wines, but as the winery notes, Marco also does Dolcetto, Barbera, as well as a entry level Langhe Nebbiolo, which I will now search out, because if his Barbaresco DOCG and Cru Montestefano are this good and low priced, they must be fantastic values as well. The winery has prized holdings in the Montefico and Montestefano crus, as well as nice sites within the Barbaresco DOCG zone from which they make this set of Barbarescos, with this one, I believe, being a cuvée of the various sites, chosen after fermentation and then blended. La Ca’ Nova is a little family winery set in a farmhouse from 19th century, in the center of Barbaresco. Founded in the ’70s, it is run by the Rocca brothers who split between themselves the different roles among vineyards, cellar and public relations, with Marco as the winemaker. They have some prime vineyards, which are treated in full respect of the environment and of the natural vegetative cycle of the vines, with those Montefico and Montestefano crus being their pride and joy, making a total of 13,000 bottles of Barbaresco in any given vintage and of which I highly recommend! Look for this 2016 Barbaresco to shine for many years to come, though it can absolutely be enjoyed now, without any penalty at all, especially with a hearty meal.
($40 Est.) 94 Points, grapelive