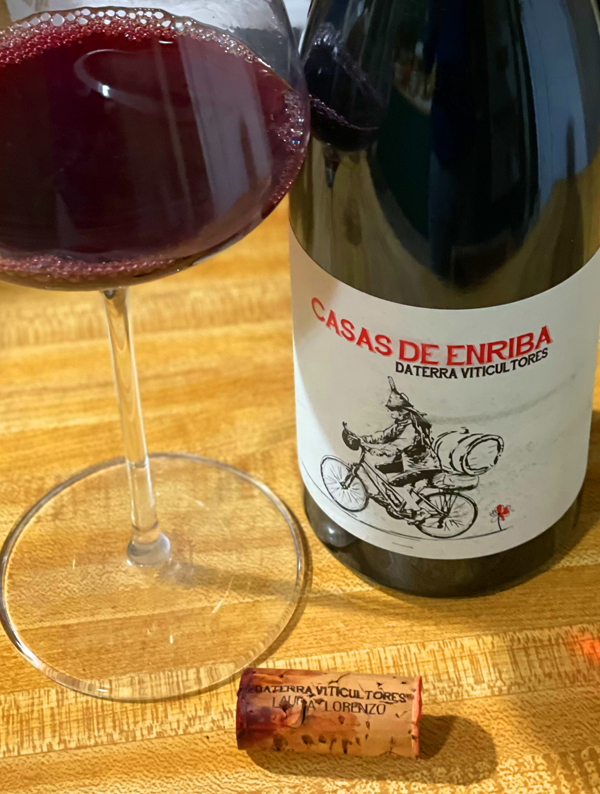 2019 Laura Lorenzo – Daterra Viticultores “Casas de Enriba” Vino Tinto, Valdeorras, Spain.
One of my favorite producers, Laura Lorenzo in Galicia, is continuing to put out brilliant and nuanced wines from the Ribeira Sacra, Val do Bibei and Valdorras regions and impossibly steep and remote vines, mostly Mencia, for her reds, as found in this Casas de Enriba Vino Tinto, as well as whites made of Godello and Palomino, all naturally pure and transparent in style with fresh acidity and unique charms. This ruby and garnet hued 2019 is bright and tangy with sharp red fruits, cherry, wild plum, dusty/spicy raspberry and tart strawberry leading the way on the light and lively palate that is accented by briar, woodsy earthiness, mineral tones, blood orange, peony florals and snappy herbs. The Casas de Enriba is, as I noted before, more like a Cru Beaujolais in presence, reminding me of Clos de la Roilette Fleurie a lot, but distinctly cool climate Mencia and terroir driven, it is a wine that is highly quaffable and more generous when enjoyed with a meal. Lorenzo’s winemaking for this one included a partially de-stemming of the grapes and it was fermented using wild yeasts in used 500L French oak barrels, with a short period of skin maceration and light extraction, for less tannin impact, as well as to highlight vibrancy here. The wine was then matured in the same neutral, well seasoned barrels for just under a year and after which it was bottled without fining or filtration, again to promote its vitality, as this 2019 version, which came in at just 12% natural alcohol, shows in raw clarity.

Coming from 20-25 year old vines in the Portomourisco region of Valdeorras, not far from the steep coastal river valleys of the Ribeiro Sacra, the new Laura Lorenzo Casas de Enriba is a blend mainly made of all hand farmed organic Mencia, the ancient native red varietal, and a small percentage of Godello, a local white grape. These vines are grown on a mix of granite, gravel, clay, gneiss and quartz soils at about 550 meters up in this cool climate Galician site in Valdeorras, which translates to “Valley of Gold” is the easternmost DO in Galicia. It’s an area of steep terraced vineyards along the Sil River, and it is influenced by the cool waters and marine climate of the Atlantic Ocean. According to Lorenzo’s importer, Jose Pastor Selections, Laura describes her farming as “agro-ecology with minimal impact.” She works with techniques that nurture life in the soils, helping to create a healthy and thriving ecosystem for her old goblet trained vines. All work is carried out manually, with these conditions and the wild remoteness here demands it and the vineyards are well cared for with some biodynamic preparations being used. As mentioned here in my prior reviews, Lorenzo, who’s wines I highly recommend, started winemaking young, at just 16 years old and has an interesting resume, including overseas stints with the famed Eben Sadie of Sadie Family Wines and Achaval Ferrer in Argentina. Laura took over the reins at Dominio do Bibei, a pioneering producer of fine wine in the Quiroga-Bibei subzone of Ribeira Sacra, taking the estate to worldwide notoriety, putting the little known Val do Bibei in Ribeira Sacra on the map, before venturing out on her with her Daterra Viticultores label back in 2014.
($35 Est.) 92 Points, grapelive