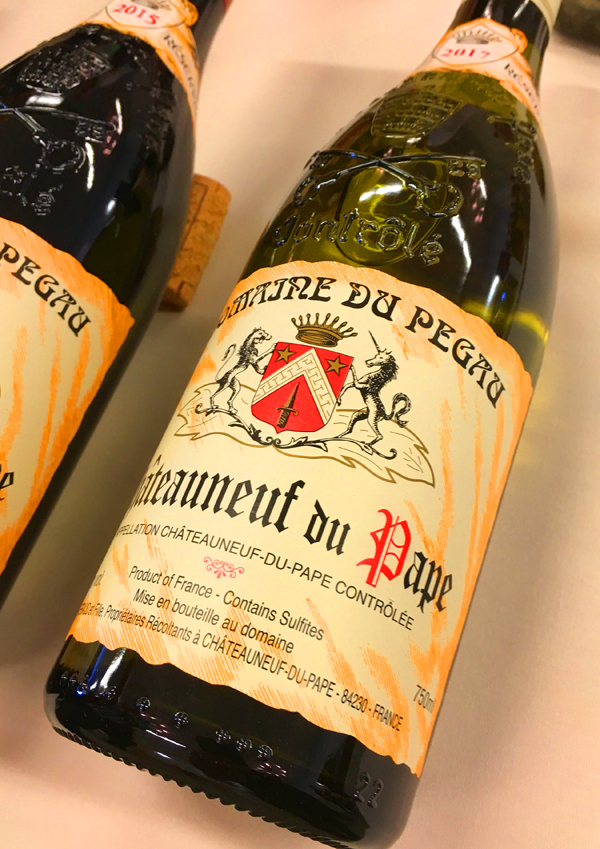 2017 Chateau Pegau, Chateauneuf du Pape Blanc, Cuvée Réservée, Rhone Valley, France.
The Cuvée Réservée Blanc from Domaine du Pegau is uniquely crafted using primarily Clairette Blanche along with Grenache Blanc, making less dense and oily than the more Roussanne based Chateauneuf-du-Pape Blancs, like those of Beaucastel and others, which gives this wine a cool toned crispness and a more lively personality in the glass, as this beautiful 2017 Pegau proves with bright citrus, melon and peach fruit leading the way on the graceful medium/full palate. I am a big fan of the Clairette based wines of the Rhone and Provence regions, so it easy to fall in love with Laurence Feraud’s lovely example, even from a warm year, it is wonderfully balanced with mineral and stony notes backing up the ripe fruit, along with snappy spices and a contrasting opulent roundness and impressive length. Hints of white flowers, wet stones, clove and saline add to pleasing layers in the mouth, with this Chateauneuf Blanc being close to perfection and holding its own against some more fancied Burgundy and Loire whites. Those that enjoy Vieux Telegraphe Blanc will find this Pegau Cuvée Réservée Blanc right up their alley and it will be a sublime wine with Mediterranean and or Middle Eastern inspired cuisine, from grilled and herb crusted fish to lemon chicken. The 2017s final blend was Clairette 60%, Grenache Banc 20%, Bourboulenc 10% and Roussane 10%, which help explain the complexity and depth found here in this brilliantly detailed and structured wine. After time in the glass, this Chateauneuf Blanc picks up that tiny amount of Roussanne and gains apricot and pear notes as well as an even more divine textural quality, with the winery recommending drinking it for up to ten years along with suggested pairings with salmon, scallops, lobster and various shellfish, noting that it also pairs well with sushi.

The Domaine du Pegau is one of the most coveted estates in Chateauneuf du Pape these days, run by Paul Feraud and his incredibly talented daughter winemaker Laurence, and these hand crafted traditional wines are some of the most authentic and sought after in the region. The Férauds, as mentioned in my prior reviews from this awesome winery, have been growing vines in Châteauneuf-du-Pape since 1670, with titles to their earliest vineyards dating back to at least 1733, but older generation of the Férauds sold most of their production in bulk to top négociants, that have included the likes of Paul Jaboulet-Aine and even Guigal. That changed in 1964, when Paul decided to sell 5,000 bottles under his own label, which brought in a new era of estate bottlings, but it was until Laurence came on the scene that the true greatest of the estate became clear, when in 1987 they started the Domaine du Pegau. Pegau now has over 50 acres of prime vineyards with a lot being old vine parcels and Laurence is making some awesome stuff, especially her top line Chateauneuf Rouge bottlings, as well as her whites like this one. The vines set on limestone and clay soils with scattered stones and some sand, pretty classic for the area, with this Chateauneuf coming from the best estate white grape parcels in the zone with red clay and lots of stones. For this Cuvée Réservée Laurence did a gentle direct pressing of the grapes and allowed a cool temperature controlled fermentation in exclusively stainless steel tanks with the total fermentation and aging (also in stainless only) lasting just about 4 months before bottling, all to preserve clarity and purity in the wine, which was achieved in excellent fashion. The aromatics take a while to unfold here, but again, I find it hard to fault anything about this wine and while I am almost always craving the reds here, this white is exceptional stuff and I highly recommend keeping an eye out for these Pegau Chateauneuf du Pape Blancs!
($72 Est.) 94 Points, grapelive