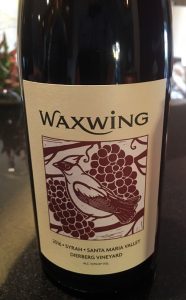 2016 Waxwing Wine Cellars, Syrah, Dierberg Vineyard, Santa Maria Valley.
I have been a fan of Waxwing Wine Cellars for quite a few vintages, Scot Sisemore’s tiny micro winery is making some great wines from top sites in Sonoma and the Central Coast, Sisemore, who has a B.S. in microbiology from Oregon State University and an M.S. in viticulture and enology from UC-Davis, has crafted some wonderful small batch wines from his facility South of San Francisco in Belmont California. The Dierberg Syrah is a new wine for Scott, he was offered a great block of fruit that he couldn’t refuse, from that cool site in the Santa Maria Valley, he did a midnight run in a refrigerated van to get these beautiful grapes as cool as possible, he did this full on Cornas style, 100% whole cluster with 15 days on the skins and stems, ending up at 13.9% natural alcohol and aged the Syrah in once used French oak for 15 months and it was bottled unfined and unfiltered. Creamy silken tannins give this away as Californian, but the profile and character is pure northern Rhone with layers of violets and black plum along with peppercorns, minty herbs, cedar and griddle bacon. The stems add a nervy green bite that keeps things thrilling from start to finish, that makes you think of Cornas, Scott did a wonderful job with this Syrah, it’s one of his best wines to date and well worth searching out! Waxwing’s Scott Sisemore has over 23 years of experience in the Northern California wine industry, having worked at Ravenswood Winery, Rosenblum Cellars and was the assistant winemaker at Pelligrini Family Vineyards before starting his indie label (Waxwing Wine Cellars) based in Belmont, just South of San Francisco. Sisemore’s new Syrah is really beguiling and offers a lot of quality and substance for the money, this and Scott’s Tondre Grapefield dry Riesling are wines to stock up on while they last. This 2016 Dierberg Syrah just gets better with air and time in the glass, it’s deep purple/black and garnet hue and wonderful perfume heavenly, this is right up there with some of California’s most sought after names in Rhone style wines, drink this one over the next 5 to 10 years.
($32 Est.) 93-95 Points, grapelive