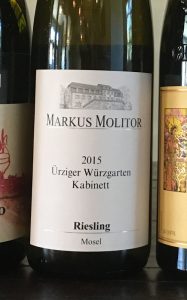 2015 Markus Molitor, Riesling Kabinett, Ürziger Würzgarten, Mosel Germany.
One of the Mosel legends, Markus Molitor is one of Germany’s elite and classic wineries along with the likes Willi Schaefer, Fritz Haag, Dr. Loosen, Selbach-Oster, Robert Eymael’s Monchhof and J. J. Prum, it’s a standard barer traditional Riesling house and a wine you should never pass up a chance on drinking. The Molitor family has been producing wine in the Mosel for more than 8 generations with Markus Molitor, who took over in 1984, is the proprietor and winemaker, he has a wonderful set of parcels, with 22 hectares of vineyard sites, some of the best in the region, including holdings in the famed areas of Wehlener Sonnenuhr, Ürziger Würzgarten, Graacher Himmelreich and Bernkasteler Badstube. His substantial holding in Zeltinger Sonnenuhr is Markus’ prize plot and known as his prime time spot, much the same as Johannes Selbach. Though all the wines are terrific, I have a soft spot for the unique and sexy Ürziger Würzgarten bottlings, especially Molitor’s Spatlese and this amazing Kabinett from the “Spice Garden” and it’s intriguing red iron rich volcanic soils with an under pinning of broken slates that are strikingly different from the more pure weathered slate sites that make up on bulk of the wineries vineyards. The slope here is dramaticly red and insanely steep, the Ürziger Würzgarten is remarkably picturesque and set in an amphitheater formed by a tight bend in the Mosel river at Ürzig. The wines from here are yellow fruited, tropical and utterly exotic, spicy aromas and with complex earthiness, with Molitor’s studied 2015 being one of the best examples, a great vintage expressing a astonishing sense of place. The Molitor Kabinett Ürziger Würzgarten 2015 is almost startling dry in feel with an austere nose with hints of orchid fruits and quince coming through in a cool and crisp personality before opening on the palate with an array of spice, stones and vibrant tropical fruit. The steely mineral core makes this wine seem tightly coiled and classic Riesling elements come through in time with air, this is really serious stuff, not as generous as one might expect, this is a wine that has a decade or more to go before everything is more easy to understand. Layers of green apple, white peach, citron, chamomile tea, dried pineapple, white pepper and flinty wet rock all add to the complexity in this fine and reserved Riesling, it’s a wine that will benefit from a willing patience as it has entered a shy stage at this point, I would give an opinion that it needs 2 to 3 years before it fully expresses itself and that it has a rewarding future.
($24 Est.) 92+ Points, grapelive