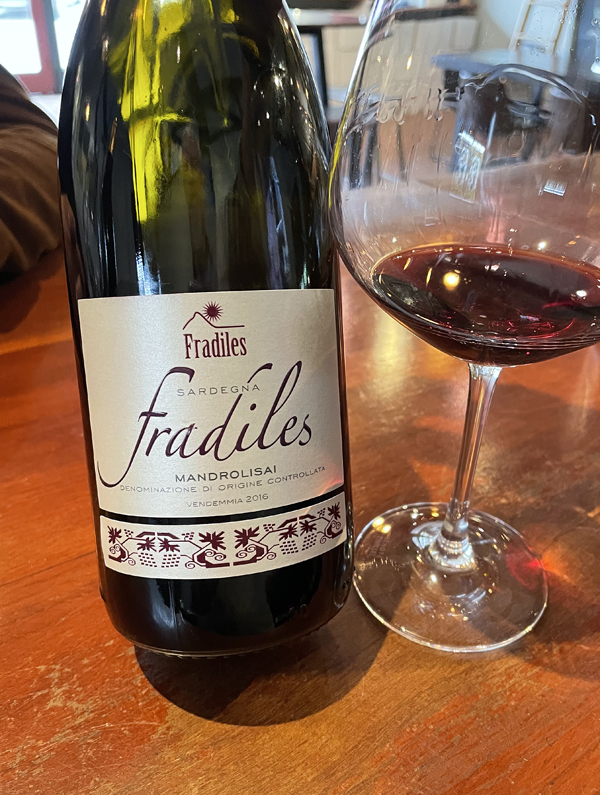 2016 Cantina Fradiles, Red Wine, Mandrolisai DOC, Sardinia, Italy.
Fradiles, based in the Atzara district, and winemaker Paolo Savoldo, are making some of the most authentic and intriguing wines on Sardinia, with this dark blue fruited field blend being an exceptional example with deep layers, mineral tones, savory elements and pretty aromatics all held together with some raw mountain tannin(s) that remind you this is an old world wine. The medium to full bodied palate is rich in dark berry, plum, cherry and tart blueberry fruits along with a fine salty, spicy and stony background, along with hints of balsamic, cedar, anise and dried flowers that almost makes you think of Nebbiolo, except for the most plush blue fruits. The firm nature of this wine makes almost imperative to have it with food and the vintage’s quality and density should allow for more rewards in the future, it looks be a wine that has a lengthy drinking window. Inviting in the glass, with a heady bouquet, this dark garnet and purple edged blend of native varietals, Bovale Sardo (Muristellu), Cannonau (Grenache) and Monica comes from mature vines high up in the Mountains, at close to 2,000 feet up that are all organic and hand tended with sandy granite based soils. In recent months, with the help of my friend Giuseppi Cossu, a native of Sardinia, I have been learning the history of this mysterious Mediterranean island with its many different terroirs, and Fradiles has become a favorite winery, offering a fascinating array of wines that show a unique sense of place.

The main grape in this wine, Muristellu is now known to be indigenous to Sardinia, which many experts believe was born here on this island. Many Sardinian varieties are genetically close to Muristellu and studies have proved its long history here, and while complicated, these discoveries suggests that Sardinia itself is one of the oldest known wine growing regions in Europe dating back to the 11th century BC. It was once thought that the Spanish brought Muristellu and Cannonau (Grenache/Garnacha) to this strongly independent Mediterranean island, but it looks more likely be the other way round. Fradiles Vitivinicola makes a lineup of native mono-varietal wines, as well as this blended wine, a true field blend that is co-fermented from Bovale Sardo (Muristellu), Cannonau (Grenache) and Monica, another rare local red grape. In the cellars, Paolo Savoldo vinifies his reds with native yeast fermentation(s) temperature controlled with a skin maceration of about 8/10 days in stainless steel, before being gently pressed and racked to large used oak casks for 6 months or so. I love this wine, which is about 40% Muristellu, 30% Cannonau and 30% Monica, it has a slightly rustic and exotic personality and delivers a red wine thrill on par with some hugely more expensive old world stars and it would be fun to put it into a blind tasting to how it performs. I previously reviewed Viniviticola Fradiles’ captivating Bagadìu, which is 100% Muristellu, and distinctly different, but equally as delicious, and I look forward to trying more from this winery, which I highly recommend for the value and admire for their passion the preserve traditions and the historic grape varietals.
($25 Est.) 94 Points, grapelive