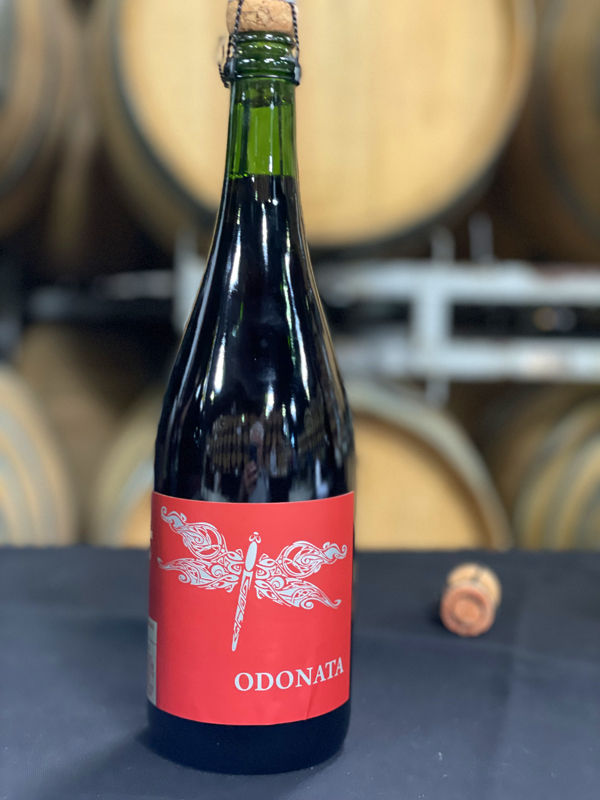 2019 Odonata, Sparkling Grenache Noir, Hook Vineyard, Santa Lucia Highlands.
Previewed at the Santa Lucia Highlands Sun, Wind Wine tasting event, the Odonata Hook Vineyard Sparkling Rouge by winemaker Denis Hoey is a macerated red Methode Champenoise bubbly made from old vines in the Santa Lucia Highlands that is exciting and lively on the palate, but with an elegant mousse and a depth of flavors. This unique sparkler saw a full skin maceration and primary fermentation, exactly as a normal red wine before going through its patient journey of lees aging and riddling to become a ruby colored Brut dry bubbly that was lovingly hand crafted to thrill the senses and provide joy to your Summer months ahead. There are some interesting Grenache sparkling wines produced in the south of France, but most are typically done in a fruity Rosé style, while this Odonata version is somewhere between Aussie Sparkling Shiraz and natural Frizzante Secco Lambrusco. The medium bodied and lightly tannic palate has beautiful clarity and shows some yeasty richness with layers of strawberry, tart cherry, raspberry and orangey citrus along with hints of peony, star anise, bitter herbs and a touch of cinnamony spice. The Odonata Grenache Noir sparkling was disgorged for a clean look and finished with a Champagne style cork and cage, rather than a Pet-Nat style pop top, which I appreciate for the sophisticated appearance and non cloudy effect in the glass, and while easy to sip on its own this wine looks to have ability to hold up to serious cuisine. The new Odonata Hook Vineyard Sparkling Rouge would be great for almost any occasion or meal, I can imagine it with rustic salami and or grilled salmon, as well as BBQs with a few friends.

As noted in my prior review of Odonata’s new Sparkling Riesling, Hoey has a real talent for these fun bubbly wines, in the past I’ve enjoyed the Chardonnay and Sangiovese versions, but I think the new offerings are even better, and of course there is a lot more to get excited about from this winery, with new releases of Silacci Vineyard Pinot Noir, Hook Vineyard Syrah, a Brunello style Sangiovese, a Carbonic Carignan and brilliant set of Santa Cruz Mountains Cabernet Sauvignon, to name a few. This sparkler, as per normal with Odonata, saw the grapes picked a couple of days early to keep freshness in the wine and once the primary fermentation was completed, which was on the skins for about two weeks, I believe, the wine was then transferred to a stainless tank and some old barrels for a short period before the complex and lengthy bottle aging. Denis and team then “en tirage” bottled the wine with added yeast and sugar that start process of creating the luxurious bubbles in the bottles. While this Odonata Sparkling Grenache Noir Brut wine is unique, red bubbly is not too uncommon here in California these days with an array of interesting versions out there with Sparkling Valdiguie (Stroumen), Sparkling Carignan (Ryme) and some Sparkling Pinot Noir or Brut Noir (Schug) being some I’ve enjoyed in recent years. One of the first red sparklers I ever tried and enjoyed was the deep inky purple/black Charles Melton Sparkling Shiraz and it made me a fan of quality dry red bubbly, and while Odonata’s isn’t as dark in the glass it offers up enough substance to hold up to robust and or meaty dishes. Odonata Wines was founded in Santa Cruz back in 2005, but became a full fledged estate winery in 2014 when they moved into the old Marilyn Remark Winery property in the Santa Lucia Highlands on River Road, which is one of the best places to visit on the SLH wine trail.
($38 to 42 Est.) 92 Points, grapelive