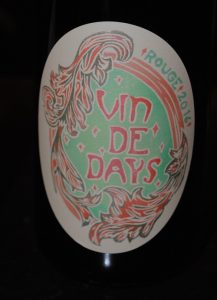 2016 Brianne Day, Pinot Noir, Vin de Days Rouge, Oregon.
The new Vin de Days Pinot Noir by Brianne Day is entertaining and slightly feral in character with an essence of Nouveau meets natural wine, but drinks with a beautiful fruit clarity that was missing in last years version, I confess to liking this Vin de Days very much and her (Brianne’s) new Alsace inspired Edelswicker white blend as well. While her single vineyard Pinots remain her top offerings, she does an impressive array of non-conformist wines as well, and she has certainly got the attention of the Oregon wine enthusiasts, especially those that want something a bit different, like Brianne’s southern Oregon red blends like her Cabernet Franc, Tennat and Kot (Malbec) cuvee as well as her Cote-Rotie style Syrah and Viognier. The 2016 Vin de Days Rouge starts with semi-carbonic notes of juicy berry fruit, tropical notes and liquid roses along with a vein of earthy spices and candied orange before setting course to traditional Pinot Noir notes of black cherry, plum and raspberry. There’s a bit of Christmas cake, cinnamon and forest floor in the background, but it really is all about the vibrancy and brightness off youth that appeals, nothing too serious to contemplate, just fun and a touch wild, it reminds me of Moulin A Vent meets Arianna Occhipinti’s Tami Frappato. Sourced from selected sites in the Chehalem Mountains and made for immediate consumption this edition of Vin de Days Rouge hints at the potential of the vintage, which I hear is going to be a highly respected year for Oregon, especially Willamette Valley wines, Day has found a niche and is making some unique, playful, serious and thrilling wines, this one is the gateway to her style, enjoy over the coming year or so.
($27 Est.) 90 Points, grapelive