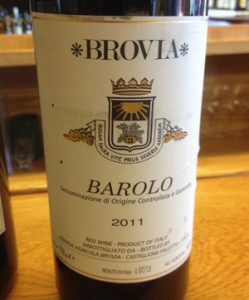 2011 Brovia, Barolo DOCG, Piedmonte, Italy.
The soon to be released Brovia Barolo normale is a generous and sexy Nebbiolo that still has serious stuffing, but can be enjoyed in it’s youth, much more so that the 2010’s, if you are looking for a great Barolo that can age and can be drunk near term this is your wine. Brovia makes a polished old school Barolo with refinement and elegance, from vineyards around Castiglione Falletto, along with G.D. Vajra and Oddero these are some of the most highly regarded and reasonably priced wines in their class, as well as making a fine Dolcetto and Barbara. The latest set of wines I tasted were all wonderfully expressive and total quality, even the 2013 vintage, which was a very difficult year, another highlight was their pretty 2012 Langhe Nebbiolo all from Barolo fruit and a steal at about $34 a bottle. The 2011 Brovia Barolo starts with a heady mix of wilted roses, tar, grilled fennel, red berries and sweet and savory earthy notes leading to a full palate of tangy cherry, damson plum, dried currants and mix berry fruits along with salted black licorice, minty herb, porcini/wild mushroom, red spices, cedar and chalky stones. The tannins are firm, dusty and have some grip, but meld in nicely letting the fruit coat the mouth and the acidity is just enough to keep everything lifted and fresh, this is a vibrant, vivid and seducing Nebbiolo that pumps out the pleasure from start to finish, it is well balanced, complex and shows solid density and length, highly impressive especially at such a young stage. There is a lot to admire in this bread and butter Barolo from Brovia even now, but it certainly will gain with time in the bottle, best from 2017 to 2025, though as mentioned it would not be a crime to open a few early, it is really good stuff, and I can’t wait to try the later release of the 2011 single Cru wines!
($54 Est.) 93+ Points, grapelive