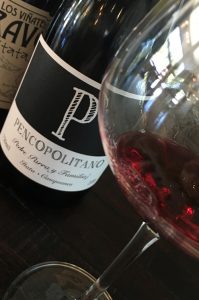 2016 Pedro Parra y Familia, Pencopolitano, Central Valley D.O. Chile.
It’s almost impossible not to love Pedro Parra’s wines and admire the man behind them, known as Doctor Dirt, Parra consults for some of Europe’s most famous wineries to get them to understand the true nature of their soils, he has a PhD in terroir, as well as making very natural style wines not far from his hometown of Concepción, using old vines in the Itata region of Chile’s Central Valley DO. The Pencopolitano, which I think might be Parra’s signature bottling, is a field blend including some old vine Pais (Mission Grape) also known as Listan Prieto, it’s made up of Malbec, Syrah, Cinsault, Carignan, and the mentioned Pais, Carmenere, grown on the 200 million-year-old batholith red granite and quartzite soils, these dry farmed bush vines are cooled by coastal winds and clouds that make for a long growing season that helps add complexity and full ripeness, while allowing good acidity and mineral intensity to shine through. He also does a single varietal Cinsault, that he calls Imaginador, as well as this one, I love them both, though in this 2016 vintage I might have to favor this Pencopolitano, which means “citizen of Concepcion”, Parra’s city, the Capital of the Itata Valley and of the terroir he is most passionate about, with it’s full body and lovely balance, it has a bit more depth and complexity to it revealing a darker core of fruit while still being so transparent and delicately textual on the palate. With 14.5% natural alcohol, you’d have expected a thicker mouth feel, but the mineral intensity and finesse here gives a much lighter impression. Aging is in cement and stainless steel for a year, the grapes coming from 6 different vineyards, all of them old vines and organic, between 60 to 110 year old, from Cauquenes and Itata, it was all native yeast, traditional fermented, and with gentile extraction, with no carbonic employed. It’s crazy trying to relate this wine to anything else, the best I can do would be to say it has similarities to the following, like if you were to certain elements of: Raul Perez Bierzo Mencia, Maxime Magnon Corbieres, Roberto Santana’s Listan Negro (Envinate) and Adi Badenhorst’s red blend from South Africa! But, that said, Parra’s wines are singular and unique, this one shows a core of round red and black fruits that includes racy plum, strawberry, briar/spiced raspberry and tangy red currant along with wild sage, herbs de Provence, light floral tones, earth, peppery notes and salty stones. There’s a play in between raw nakedness and structured grace that seduces completely, it’s an intriguing wine to explore, it sits between a Pinot and a Rhone blend and goes great with rustic cuisine, it’s fun, but a thinkers wine too, drink now.
($27 Est.) 92 Points, grapelive