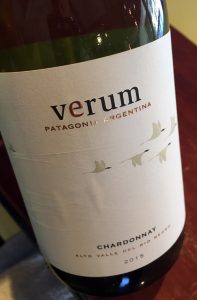 2015 Bodega Del Rio Elorza “Verum” Chardonnay, Alto Valle de Rio Nergo, Patagonia, Argentina.
The Verum label (Bodega Del Rio Elorza) is a boutique, family winery with 45 acres of high-density vineyards in the Alto Valle del Rio Negro, Patagonia. With international winemakers, consultant Hans Vinding-Diers and the local Agustín Lombroni, plus Alberto Antonini, Mariano Vignoni crafting this offerings, Verum is trying to capture a sense of Patagonia’s unique terroir, while making world friendly wines that crowd pleasing values. In addition to Malbec, Verum is also bottling Merlot, Pinot Noir and this Alto Valle de Rio Nergo Chardonnay, which is no malo wine that is 80% stainless aged white that is on it’s lees for about 6 months with 10% in used French and 10% in used American oak barrels. The Verum Chard, 100% from Bodega Del Rio Elorza’s Estate vineyard, the Fernández Oro, in the Alto Valle del Rio Negro, Patagonia, is grown all sustainable, mostly organic and from high density vines at about 300 meters up. The 2015 Verum Chardonnay, imported by Vino del Sol, is soft and flavorful with a touch of caramel to go along with citrus and stone fruits, it’s a medium bodied easy to enjoy white for those that normally like middle of road California style Chards, it has a subtle touch of sweetness and creamy finish that will certainly appeal the bistro crowd that just want an pleasant quality aperitif style wine for social sipping. There is a honeysuckle, bosc pear and lemony note that leads here before opening up on the palate with golden apple, peach and tropical notes coming to the fore, not overly complex or nervy (not a Chablis), this is one that is perfect for those that just ask for the house Chardonnay or need a reasonable wine for a party.
($15 Est.) 87 Points, grapelive

2017 Lagar de Bezana, Rosado, Alto Cachapoal, Chile.
Lagar de Bezana’s rosé of Cabernet Sauvignon/Syrah, is picked to be a true Rosado and it’s richly round and full of flavor, it was barrel fermented and aged which gives the impression of texture and it has a fruity full palate and while not thrilling or electrically crisp, it is dry enough to be be refreshing and different, perfect with hearty foods it is a nice value and makes for a easy bistro pink. Rene Piantini and the director of winemaking is Benjamín Leiva has done a nice job here with this Chilean Rosado, imported by Vino del Sol, it is worth searching this out if you wanted a fuller bodied dry Rose that goes great with a bigger meal and robust cuisine. The palate shows an impression of crisp detail, but the mouth feel is lush and lengthy with a finishing creamy quality, even though the fruit is not cloying, the Cabernet allows for the fullness without sweetness, it shows bright cherry, raspberry and red peach fruits along with wet stones, mixed spices and a melon like fleshiness with a hint of wood, drink it up sooner v. later.
($10 Est.) 86 Points, grapelive 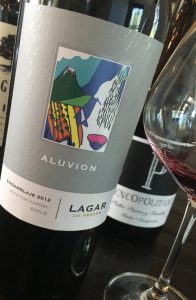 2013 Lagar de Bezana, Aluvion, Gran Reserva Ensamblaje, Alto Cachapoal, Chile.
Lagar de Bezana a modern winery, located in Alto Cachapoal, a stunning Chilean micro-terroir within the Rapel Valley located in the foothills of the Chilean Andes, making some fruit forward international styled wines of great value and quality. The owner is Rene Piantini and the director of winemaking is Benjamín Leiva, who uses the gravity flow and the 130 acres of estate vines to great effect, it is cooler here and the wines retain a good core of vitality, with it’s almost Mediterranean climate, as well as soils that are alluvial, in combination with elevation, the altitude is 2,000 plus feet, the wines show intensity of flavor and color, especially this Aluvion. The 2013 Gran Reserva Ensamblaje is a hybrid Chilean and Bordeaux style blend of 65% Cabernet Sauvignon, 20 Syrah, 10 Petit Verdot and 5% Carmenere grown on the estates gravelly slopes, it saw a 7 day cold soak before fermentation and it spent 12 months in 100% French oak barrels with a good portion being new, making for a rich and full bodied wine. This vintage was crafted by the team of full time hands Meinard Bloem & Cristóbal Undurraga who went for a wine of palate impact, but one that still shows the nuances of their terroir in the Alto Cachapoal. This very dark red is full bodied and lavish in style and structure with a firm tannic grip holding things together, it makes for a great Napa alternative, as for a wine like this quality wise you’d be look at 50 to 70 bucks. Deep blackberry leads to way both on the nose and palate with liquid violets, creme de cassis, plum and cherry flavors coming through as well as delicate mocha, anise, spice and cedar notes adding to the whole experience. This is drinking exceptionally well now, though I’d be sure to have some serious proteins with it, imported by Vino del Sol, this is a bold effort to look for.
($28 Est.) 91 Points, grapelive 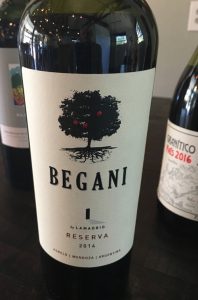 2014 Lamadrid “Begani” Reserva, Lujan de Cayo, Mendoza, Argentina.
This Begani Reserva, by Lamadrid is a true Argentine red blend featuring 60% Malbec, 30% Bonarda (Charbono), 7% Cabernet Sauvignon and 3% Cabernet Franc made using native yeasts and combination of traditional and modern techniques that tries to capture the unique high elevation terroir of the Lujan de Cayo, part of the famed Mendoza region in the Argentine Andes. Begani is the newest project from the Lamadrid kids, Beatriz, Gabriela, and NIcole, which are slightly higher end versions of Lamadrid line, the winery that is owned by Guillermo García Lamadrid, with winemaker and President Héctor Durigutti running it day by day. Lamadrid owns three vineyards in Agrelo, a sub zone of Lujan de Cayo, they include Finca La Matilde (planted 1929), Finca Lamadrid (planted 1973), and Finca La Suiza (planted 2004) with every wine coming from one of these Agrelo single vineyard sites. Again only indigenous yeasts are used, with no fining or filtration. This Reserva was fermented after an 8 day cold maceration is epoxy lined cement vats before being aged 12 months in 60% second-use French oak barrels and 40% third-use French oak barrels ending with a well balanced 14% natural alcohol and very expressive black fruits. This 2014 Begani, is bright, but darkly focused with blueberry pie filling, black cherry, plum and cassis all flowing across the medium/full palate in a nice cascade of fruit along with hints of cedar, minty herb, cinnamon and sweet floral tones, this is a very stylish effort and a solid value that’s ready to drink.
($18 Est.) 90 Points, grapelive

2016 Pedro Parra y Familia, Pencopolitano, Central Valley D.O. Chile.
It’s almost impossible not to love Pedro Parra’s wines and admire the man behind them, known as Doctor Dirt, Parra consults for some of Europe’s most famous wineries to get them to understand the true nature of their soils, he has a PhD in terroir, as well as making very natural style wines not far from his hometown of Concepción, using old vines in the Itata region of Chile’s Central Valley DO. The Pencopolitano, which I think might be Parra’s signature bottling, is a field blend including some old vine Pais (Mission Grape) also known as Listan Prieto, it’s made up of Malbec, Syrah, Cinsault, Carignan, and the mentioned Pais, Carmenere grown on the 200 million-year-old batholith red granite and quartzite soils, these dry farmed bush vines are cooled by coastal winds and clouds that make for a long growing season that helps add complexity and full ripeness, while allowing good acidity and mineral intensity to shine through. He also does a single varietal Cinsault, that he calls Imaginador, as well as this one, I love them both, though in this 2016 vintage I might have to favor this Pencopolitano, which means citizen of Concepcion, Parra’s city, the Capital of the Itata Valley and of the terroir he is most passionate about, with it’s full body and lovely balance, it has a bit more depth and complexity to it revealing a darker core of fruit while still being so transparent and delicately textual on the palate. With 14.5% natural alcohol, you’d have expected a thicker mouth feel, but the mineral intensity and finesse here gives a much lighter impression. Aging is in cement and stainless steel for a year, the grapes coming from 6 different vineyards, all of them old vines and organic, between 60 to 110 year old, from Cauquenes and Itata, it was all native yeast, traditional fermented, and with gentile extraction, with no carbonic employed. It’s crazy trying to relate this wine to anything else, the best I can do would be to say it has similarities to the following, like if you were to certain elements of: Raul Perez Bierzo Mencia, Maxime Magnon Corbieres, Roberto Santana’s Listan Negro (Envinate) and Adi Badenhorst’s red blend from South Africa! But, that said, Parra’s wines are singular and unique, this one shows a core of round red and black fruits that includes racy plum, strawberry, briar/spiced raspberry and tangy red currant along with wild sage, herbs de Provence, light floral tones, earth, peppery notes and salty stones. There’s a play in between raw nakedness and structured grace that seduces completely, it’s an intriguing wine to explore, it sits between a Pinot and a Rhone blend and goes great with rustic cuisine, it’s fun, but a thinkers wine too, drink now.
($27 Est.) 92 Points, grapelive 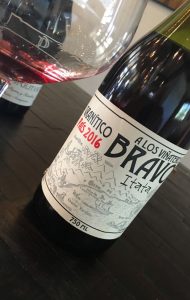 2016 A Los Vinateros Bravos-Leonardo Erazo, Granitico Pais,, Itata Valley, Chile.
Pais is an ancient grape variety, also in this case known as Listan Prieto, brought to Chile when the conquistadors settled there in the late 16th century and tended by the Missionaries for hundreds of years, this varietal is called still the Mission grape along with it’s brother vine Listan Negro and the white is Palomino, famous in the Sherry region still, while the red is now only found here in Chile as well as the Canary Islands, though some is also in parts of Mexico and the USA. Leo’s versions, are grown on distinct soils types, with this one of pure granite or granitico with sandy top soil in the Itata Valley, not far from Concepción and from vines that were originally planted back in 1551! Erazo’s wines are light and transparent with pure mineral focus and a minimalistic approach from mostly organic/dry farmed old vine grapes, with this 2016 showing the grapes purest form with an earthy/leathery core of fruit with a crisp shale/flintiness and delicate layers of tart cherry, strawberry and sour plum along with a hint of savory spice, menthol, wild herb, sticky lavender and dusty/dried red pepper. Light bodied and lifted with a juicy nature this Granitico Pais has a funky natural wine feel, but reveals pretty flavors and floral notes with air and it grows on you sip after sip. Drink this as you would a Cru Beaujolais, slightly chilled and with rustic cuisine, and though more savory nuanced it has that same easy joyous personality, it reminds me a bit of Envinate’s base Tenerife (Canary Islands) offering, which is high praise for me as I adore those wines! Imported by The Source Imports, Leonardo Erazo’s A Los Vinateros Bravos is a wonderful discovery for those like me that love the fringe or geeky wines of the world, drink over the next year or so.
($20 Est.) 90 Points, grapelive