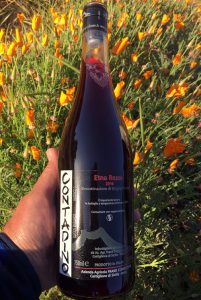 2016 Frank Cornelissen, Contadino, Etna Rosso DOC, Mount Etna, Sicily, Italy.
The entry-level red wine of the organic and natural winemaker Frank Cornelissen, is the Contadino it is basically a field-blend of mainly Nerello Mascalese (about 85%) though the rest is made up of other local varietals from his old vine parcels, which includes Nerello Capuccio, Allicante Boushet, Minella and Uva Francesa. Belgian-born Frank Cornelissen was a wine merchant in his previous life before he located to the island and started making his own wines on the volcanic soil slopes of Mount Etna in Sicily. Corneilssen uses grapes from Picciolo, Malpasso, Campo Re, Crasà, Piano Daini, Feudo di Mezzo all in the cooler northern facing zone of Mount Etna, and of which all now qualify for Etna Rosso DOC and all these vineyard’s vine are on average 50 years old or more, this cuvee is all de-stemmed and aged only in epoxy lined tanks with no wood and no fining to showcase the purity of the region. The 2016 Contadino is bright, spicy and lightly smoky with pure volcanic flair showing it’s Nerello Mascalese core profile with racy and refined, Pinot Noir like red fruits, flinty notes and a mix of herbs, anise and subtle florals. Layers of cherry, strawberry, wild plum, cranberry, tart blood orange and almost peachy fruits, everything flowing across it’s light frame on the fresh medium bodied palate, there’s good lifting acidity and silky tannins making for a refreshing red that is at it’s best with a slight chill on it and with Summer cuisine. The only real knock here would be it’s price, to be honest, I know Etna Nerello Mascalese is Sicily’s Burgundy, but this is a bit too costly for what you get, even though I really enjoyed every sip and will without question drink a few more of Cornelissen’s wines after trying this one, drink this Contadino over the next year or so.
($39 Est.) 92 Points, grapelive