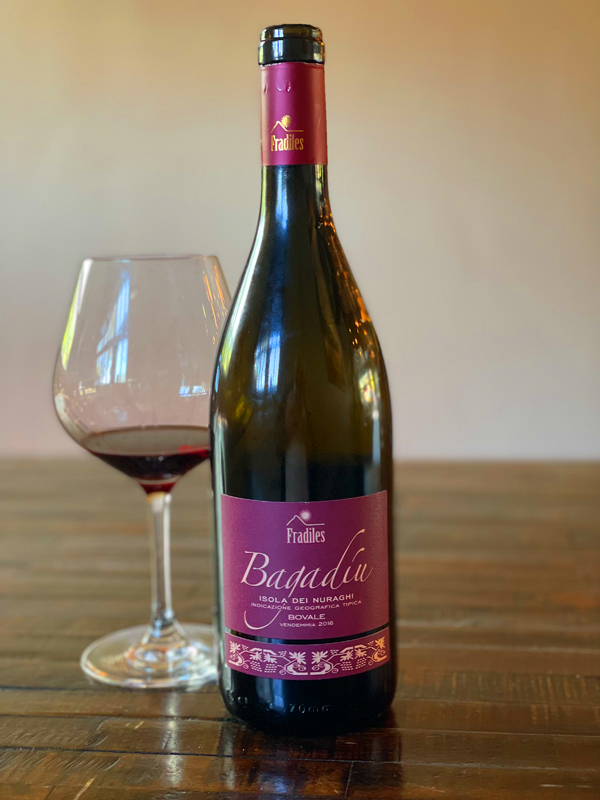 2016 Cantina Fradiles Vitivinicola, Muristellu – Bovale Sardo, Bagadìu, Red Wine, Isola dei Nuraghi IGT, Sardinia, Italy.
The Fradiles winery on Sardinia, was all new to me, as was the red grape Muristellu (also known as Bovale Sardo), but I am very interested now in both this organic and traditional producer and this deeply flavored varietal, after tasting this fabulous 2016 Bagadìu IGT Rosso, which is 100% Muristellu and reminds me a bit of the powerful Aglianico wines of Taurasi in Campania. This wine, oddly not allowed to be labeled under the DOC rules because it is all Muristellu, is very dark with a garnet crimson hue in the glass and has firm dusty tannins that support a beautiful array of fruit with black cherry, plum, mulberry and fig on the full bodied, slightly rustic, palate. There is a layer of earthy old world charm here that keeps things complex with hints of cut tobacco, leather, iron and truffle, as well as minty wild herbs, dried flowers, cedar, grilled orange peel and red spices. With few reference points, I can only say that this is intriguing stuff by Fradiles and I can’t wait to try more wines from this ancient indigenous grape, plus I am feeling a huge pull to visit Sardinia and explore the wines much more intensely than I have in the past, clearly there are many more treasures to discover here. Coming from a highly regarded vintage and with a bit of age, this wine is showing extremely well and only getting better, I’ll have to see if there is more available out there, it would be thrilling to re-visit this rarity in 5 to 10 years. I am incredibly grateful for the chance to try this wine and learn more about the history of this mysterious Mediterranean island with its many different terroirs, with this one being dominated by its decomposed granite sandy red soils, in the Southern part of the Island, not too far from Cagliari. This serious and compelling wine, which still retains good natural acidity, with be great with hard sheep cheeses as well as with grilled meats, wild boar and or lamb dishes, its a taut wine that will benefit from robust cuisine choices, that will allow the density of fruit to shine and soften the tannins.

My friend and Sardinian sommelier/winemaker Giuseppe Cossu has provided me with some incredible information on Sardinia and was kind enough to share this rare wine and varietal with me, he added many curious (facts) points to my own limited research into this and other mysterious local grapes. He even linked me up to the latest documentation on Muristellu, which was compiled by vinifera experts (which I need to credit and thank) that shows from the genetic analysis that it is definitively evident that Muristellu (Bovale Sardo) and Bovali Mannu (Cagnulari) are two distinctly different vines, but of which share in some family relations and excludes a possible relationship of direct kinship. Was thought to be similar or related to Bobal in found in Southern Spain, Muristellu is now known to be indigenous to Sardinia, which many experts believe is like Grenache (Cannonau) and born here on this island. Many Sardinian varieties are genetically close to Muristellu and analyses have also identified relationships of descent, while complicated this suggests that Sardinia itself is one of the oldest known wine growing regions in Europe dating back to the 11th century BC. It was once thought that the Spanish brought Muristellu and Cannonau (Grenache/Garnacha) to this strongly Mediterranean island, but it may just be the other way round. Interestingly, in Corsica, Muristellu is called Carcajolo Noir, where it is also now found, though it remains a rarity on both islands, but makes wines that are well worth searching out. Fradiles Vitivinicola makes a lineup of native varietal wines, as well as a blended wine made from Bovale Sardo (Muristellu), Cannonau (Grenache), Monica, another rare local red grape. The Bagadiu comes from mature 40 to 60 year old vines at close to 2,000 feet up that are all hand tended, that are, as mentioned all organic and the wine saw a native yeast fermentation in stainless steel, where it spent 6 months before being racked to large used oak casks for another 10 months. Fradiles, and winemaker Paolo Savoldo, made just about 200 cases of this sultry and captivating Bagadìu, so it will be a hard get for us in California, though I am motivated to find some more, along with their other offerings, especially their co-fermented field blends.
($45 Est.) 93 Points, grapelive