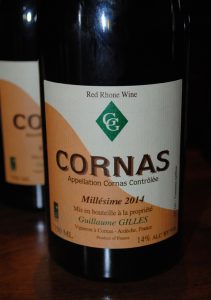 2014 Guillaume Gilles, Cornas, Northern Rhone, France.
One of the my favorite Syrah wines in the world, Guillaume Gilles Cornas, is a powerful and edgy red with wonderful depth and intensity, but with a certain polish and inner elegance that makes it stand out in a crowd of fine northern Rhone offerings. Guillaume Gilles, once a young vigneron resident in Cornas, is now one of the regions top talents, he trained under the famed Robert Michel and was Michel’s most loved protégé, not only did Robert Michel mentor the young Guillaume Gilles, he also leased his prime parcel in the Chaillot vineyard to him and provided his cave (with all its history and secrets!) when he retired in 2006. Gilles, like Thierry Allemand, it an ultra traditionalist in the cellar, he’s never even seen a destemmer! And he uses 100% whole cluster, only native yeasts, ferments in concrete vats and ages in old demi-muids, large used French oak casks, and bottles without fining or filtering. In Cornas, the best wines without question come from the old and best sites and Chaillot is just about the greatest parcel there is and Gilles hand tends his rows on the higher and steepest part, which tends to give the most concentration, tannin and an added dimension to the wines, his plot average 40 years old and while not certified his works in an organic way on the rocky granite, clay and limestone soils. It was great to finally meet Guillaume in person recently, when he was on a sales tour with Rosenthal Wine Merchants in San Francisco, and tasting his current lineup which included this 2014 Cornas, his top wine, as well as his rare Vin de France (100% Syrah) Les Peyrouses from vines just outside the legal Cornas zone on a flat galet (big round river stones) strewn site with sand and clay soils, it can also be labeled Cotes du Rhone, the same way A. Clape does. The 2014 vintage was not the region’s top years, but the Gilles Cornas is remarkably powerful and profound in the glass with an opaque purple/black/garnet hue and a vast array of terroir influences on the nose and palate with your senses getting a thrill of crushed violets, raw meat, peppercorns, mure and tapenade along with edgy black and blue fruits forming a core with firm tannins and a vivid stemmy nature. Gilles gives a long cool cuvaison to this wine, macerating up to 30 days and elevage (aging in cask) lasts 18 months, plus a year in bottle before shipping, he uses only a tiny amount of sulfur and the 2014 shows tremendous purity and vigor with a heightened lift of natural acidity, which adds a feel of energy and lightness to this brilliant wine, it just gets better with every sip adding blueberry, kirsch, lavender and salted black licorice to the layers on display here, wow, this is stellar and gripping stuff. I have been following this winery since the first US release and I am always impressed and intrigued by the wines, and considering the amount made and the quality, the Guillaume Gilles is a must have Syah, it delivers a performance that is world class, and while slightly austere there is a gorgeous subtle beauty that should unfold over time, even though it seems a bit hidden at the moment, amazing in detail and complexity, I can only imagine the greatness and flamboyance that the 2015 promises, but I would not pass up the chance to get this 2014, it’s simply awesome, drink over the next 5 to 15 years!
($70 Est.) 94 Points, grapelive